After over three decades, Pac-Man’s still got it.

It’s amazing to think Pac-Man has been around since 1980. There hasn’t been a remarkable Pac-Man game since you could argue, yet he’s still as relevant as Mario or Sonic. Proof of that came with the acclaimed Pac-Man Championship Edition, a major overhaul of the original. Now Namco continues to prove the yellow pizza with a missing slice deserves a spot in modern gaming with its follow-up, Pac-Man Championship Edition 2.

Perhaps the biggest change is how the ghosts work. They’re no longer one hit death killing machines. Instead, running into them will bump you and the ghost apart. This will give you time to choose a new direction, or send the ghost another way. They only become hostile after hitting them three times in a row in quick succession. At that point, they get quicker and actively hunt you down until they kill you or cool down. 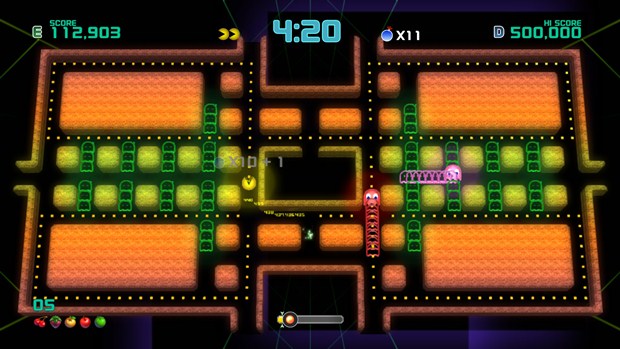 "Score Attack is this game’s bread and butter. In this mode, there are several sub-sections, each with different gameplay styles."

They also operate in what’s called “ghost trains.” You’ll find several smaller ghosts asleep at multiple points across the board. Once you go past them, they’ll wake up and join the bigger ghosts. They too are harmless, and disappear for a short time if you enrage the larger ghost they’re following. But their addition causes two changes. The first is that the massive conga-line behind the main ghost, which can block your path and force you into corners. The second – more important feature – is that they act as combos. Power pellets aren’t scattered across the board anymore. They instead appear at intervals after collecting a certain number of regular pellets. Once you grab a power pellet, you have to hunt down a main ghost as you would in the original Pac-Man. When you do so, you’ll also eat the smaller ghosts in that train, boosting your score depending on how many ghosts are in the train. It’s to your benefit to wake up as many ghosts as you can so you can eat them all at once for massive combos.

You learn all of this through the game’s tutorial, which is not optional. This is the major problem with the game. You have to complete about 60% of the tutorial before you’re allowed to play anything else. Even upon completing the mandatory 60%, you still only unlock one of the game’s modes, Score Attack.

Score Attack is this game’s bread and butter. In this mode, there are several sub-sections, each with different gameplay styles. There’s “Dungeon,” which has a lot of ghosts on a board with tight corners and small lanes. There’s also “Highway” which is the exact opposite – wide open tracks with minimal ghosts that’s all about high speeds. “Mountain” may be my favorite. These boards are set up like a mountain, with most of the pellets at the bottom and few at the top, and you have to work your way up through increasingly difficult areas and more ghosts. There are different difficulty settings for each sub-section that drastically alters gameplay for each level. Unfortunately, much like the Score Attack mode itself, these are locked behind walls. You begin with just one sub-section, and have to play it to unlock both the higher difficulty of that one, and the next sub-section. Again, it feels restrictive and pointless. Maybe the developers wanted to make sure you experience every level and each difficulty setting. Forcing the players into it is a ham-fisted way of doing it though. 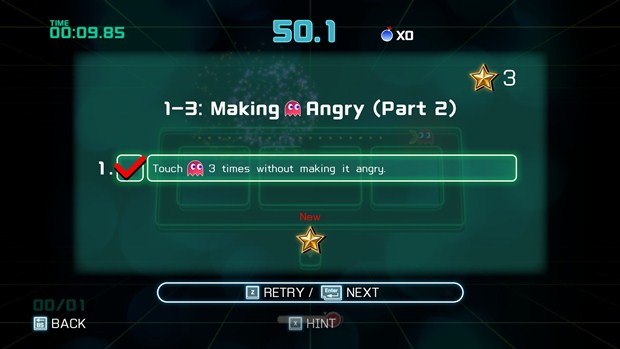 "Pac-Man Championship Edition 2 is short on paper. There are 10 sub-sections with four difficulties each, and Adventure mode. Plus everything is locked behind levels, like a story based game."

After beating six different sub-section levels, you finally gain access to the second and final game mode: Adventure Mode. It’s not worth the wait, so it’s a good thing this comes after Score Attack. Adventure mode is much more restrictive and repetitive. You must achieve certain objectives to progress, and you have little time to do so, about 20-30 seconds for each. Once you complete an objective, the clock will reset and you have to do the next objective. The freedom of movement in the Score Attack is gone, replaced by having to follow set patterns within a small window of time.

It feels like the developers were trying to pad out the length. Pac-Man Championship Edition 2 is short on paper. There are 10 sub-sections with four difficulties each, and Adventure mode. Plus everything is locked behind levels, like a story based game. But there is no story, so there should be no reason to play levels in any set order to unlock new ones.

But there’s a lot more on offer than you might first expect. Thanks to the addition of all the power-ups, multiple lives, and the angering ghost mechanic, there’s little chance you’ll die in a stage. Championship Edition 2, much like the first game, isn’t about surviving and beating each stage. Instead, as the name of the first mode suggests, it’s about getting a high score.

There’s a worldwide leaderboard where you can compare yourself against your friends or anyone in the world. The bulk of the game is about replaying levels multiple times, learning the boards, and improving your score. It’s only by replaying levels that you learn some of the finer points of Championship Edition 2. You’ll come to realize that ghosts move in certain patterns. You’ll also realize that each board has its pellets laid out in a deliberate pattern that you can follow from beginning to end. Following these paths will give you the highest score. They’re the fastest way, and lead you through all of the smaller ghosts to wake up and later eat. It might not look it, but this is the epitome of an “easy to play, hard to master” kind of game. 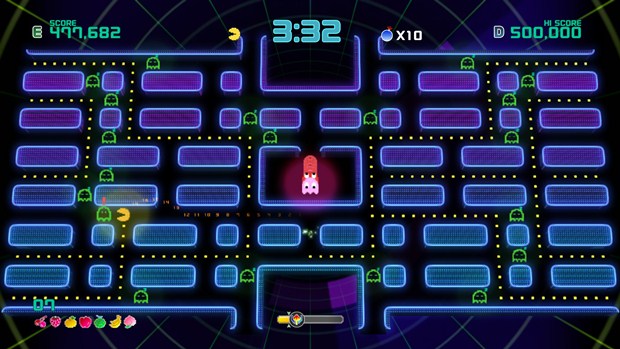 "Much like the original Championship Edition, the music now has an upbeat techno feel, with one track sounding a lot like Gangnam Style of all songs."

One drawback of this mechanic though is tedium. This isn’t the kind of game you’re going to play for hours at a time. Despite the diversity of each mode and sub-section, each level is ultimately the same thing, and that can get tiring very quickly. That’s why being forced to unlock modes feels so restrictive. You want to pop in and out whenever, not sit there and play certain levels for however long it’ll take to get to the level you want.

If you don’t mind those caveats, you’re in for a real treat. The revamp of Pac-Man goes beyond just the gameplay. Part of the overhaul is the art style and music. Much like the original Championship Edition, the music now has an upbeat techno feel, with one track sounding a lot like Gangnam Style of all songs. The art style is bright and vibrant, but still minimalist. The bright rainbow colors of the board and ghosts pop against the black backgrounds, and the bright glowing lights do well to guide you away from ghosts and into jump pads or power-ups.

You’ll eventually get used to the flashing lights and the seemingly hundreds of ghosts in their trains, but it can cost it when you’re first getting started. When you get used to the visuals and the music, it becomes the icing on a well-made, delicious cake.

Pac-Man has been completely reinvented. Championship Edition 2 feels drastically different from both the original 80’s arcade game and its predecessor, while still feeling true to the franchise. There’s a lot more meat on the bones than at first glance. You’re encouraged to play levels multiple times, and you’ll notice new things each time, adding to the replayability. The perfect game for a mobile device, but still fun enough on PC or console in short bursts. The presentation is off the charts, with an eye catching art style and addictive music.

It can be annoying having to play through certain levels to unlock difficulty settings and new modes. There’s more content than you may originally believe, but there still isn’t enough to hold your attention for more than 30 minutes at a time. The Adventure Mode is a nice addition, but is ultimately boring and feels out of place.

Final Verdict:
GREAT
Pac-Man Championship Edition 2 is everything you may want out of a puzzle game and more. It looks simple at first glance, but there’s a surprising amount of depth. It can be annoying have to jump through so many hoops to unlock that content, but the jumping is very entertaining. If you don’t come into this expecting to just beat levels, and instead want something you can spend days or weeks trying to master, you’re in for a great time.
A copy of this game was provided by Developer/Publisher/Distributor/PR Agency for review purposes. Click here to know more about our Reviews Policy.