There’s a party, but you’re the designated driver.

Other than the impeccable chore that is Dante’s Inferno, I can’t really recall a lot of games centered around the concept behind the Seven Deadly Sins, let alone have you actually play each and every representation all the way through. Good news from studio Crankshaft Games then, as Party of Sin does just that.

A 2D side-scrolling action-adventure platformer at its core, Party of Sin melds 7 playable characters personifying the Seven Sins, into a hodge-podge of intricate puzzle-solving with a dash of combat and humor thrown in. The serious lack of quotes from the 1995 thriller “Seven” was off-putting, but thems the breaks.

Though, when I say humor, I mean that in the least plausible manner. Although Party of Sin doesn’t take its story too seriously, it does very little to actually make you care or have you laugh along the way. Stories set in the Netherworld and beyond need not be an uproarious experience, but everything here feels like a missed opportunity.

The cutscene work in particular is just not as good as the artwork featured on the game’s main menu, and you will quickly tire of what little sound bits are fed to you while switching between your seven characters. The Sins may be having a party, but they’re awfully reticent about their journey. In fact, in order to help amuse myself, I had unlocked Big Head Mode from the very start and kept it on all the way through. This option somehow does a better job of showing off the charming personalities than the standard “default” one. 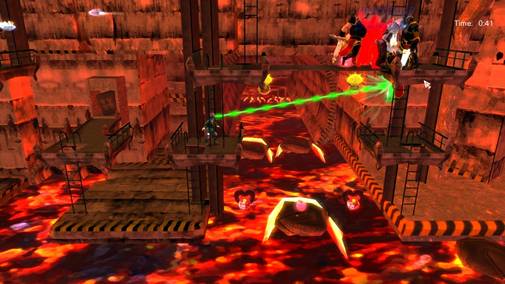 The reality of having seven playable characters at your every disposable will take some getting used to. If you’re using a keyboard and mouse setup, a recommended preference, you have the choice of switching out via hotkeys or a character wheel (by holding the SHIFT key). Hotkeys work more favourably so long that you remember what key is mapped to which character, as well as remembering what each character can actually do.

Party of Sin focuses on having you switch in and out swiftly and efficiently during puzzles segments, and these parts of the game are certainly the cream of the crop. Once you get past the needless notion of why only particular characters can pick-up blocks or push switches (basically, because you don’t have a choice), the switching dynamic can get fairly goofy and even enjoyable.

What kills that enjoyment are the dodgy controls and enemy encounters. Jumping and platforming are handled with clumsiness, as characters either feel too sluggish, unresponsive or lack sufficient height in air. Nobody in this game can double-jump. Pride has an air dash that helps you get across fairly larger gaps, and Greed can use his hookshot to grapple to higher places, but the latter case is a lot more situational. Speaking of which, although all characters share a single life bar, touching spiked floors or a water bank will result in an instant death. But fighting in general lacks any soul.

There are times when you can simply ignore enemies, provided they don’t follow you all the way to the next checkpoint or puzzle. Perhaps the most heinous decision was to have color-coded shield protectors. Hearty luck to those who have an easier time distinguishing between light blue and light purple spherical auras. But a special shout-out to whomever came up with the demonic narwhal for a boss fight. 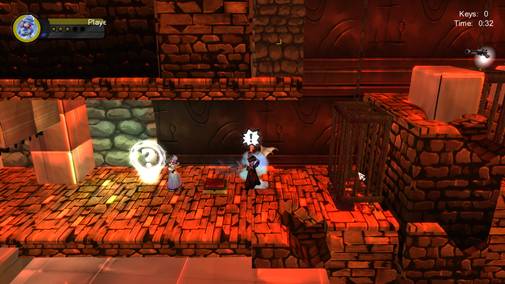 For the co-op mode, additional players will be able to control a Sin and switch out at anytime, provided the other player isn’t already controlling him or her. I wouldn’t go as far to say the addition of 4 player local co-op would alleviate all of the issues with combat, nor even greatly enhance the puzzle solving all that much.

It would’ve been nice to have an option to let players select duplicate Sins, but what I can’t understand is the negligence of playing in levels you’ve already completed by yourself and the (wait for it) sinful omission of online multiplayer.

The developers have stated that griefing online is something they didn’t want to encourage given the anonymity the internet grants a user, and that griefing in real life is perfectly suitable and makes more sense here. Firstly, you could simply do what Robot Entertainment did with Orcs Must Die 2 – not have a server browser altogether and giving only the option of inviting those in your friends list to play with you.

Secondly, I find it much harder to gather four friends around a PC to play a co-op title, as opposed to playing on say, a console. I’m not saying its impossible, but one should not have to sacrifice convenience. And if something like Trine 2 can do both local and online co-op, why can’t Party of Sin?

Forgettable combat, dodgy controls, some puzzles aren’t that swell, story and characters aren’t all that fun, no support for online multiplayer

Final Verdict:
MEDIOCRE
There’s a decent game hidden underneath the frustration that combat brings, but Party of Sin’s ho-hum tale, control issues and lack of co-op options make it a mediocre offering. Either wait on a demo or hold off until a sale.
A copy of this game was provided by Developer/Publisher/Distributor/PR Agency for review purposes. Click here to know more about our Reviews Policy.