Persona 3: Dancing in Moonlight and Persona 5: Dancing in Starlight Review – Missed A Beat

While fans will still find these games enjoyable, there’s no denying that by almost every metric, they are demonstrably disappointing.

There are multiple reasons for why the games feel like they come up short. Persona 4: Dancing All Night already felt a bit lacking when it launched on the PlayStation Vita in 2016, but 3 and 5 Dancing feel even more barebones than that game. The games have very bare song lists, with only 25 songs each. In and of itself, that’s bad, but it gets worse because a lot of the songs are repeats—there are a couple of versions of Last Surprise and Wake Up, Get Up, Get Out There in Persona 5: Dancing in Starlight, for example. The full Persona 3 and 5 soundtracks are extremely rich, and in my opinion are the two greatest video game soundtracks we have ever received. So when Persona 3: Dancing in Moonlight skips over a song as obvious as The Battle for Everyone’s Souls—yes, the original version of that song is not in the song list that comes with the game out of the box, it is DLC instead—you feel short changed. How can you have a Persona 3 rhythm game without arguably its most iconic track included?

Let’s talk about that DLC for a second. There were 30 songs released as DLC for Persona 5 Dancing, and 26 for Persona 3: Dancing in Japan. Presuming all of these come over to the west, there are more songs available as DLC than there are available in the base game itself. While I can appreciate and understand wanting to keep some songs, such as the concert renditions of a lot of the music, as DLC, keeping obvious stuff, like the aforementioned Battle for Everyone’s Souls, locked as DLC to me is unacceptable.

The issue often is that even with the songs that are included, a lot of the times the remixes are truly unsatisfactory and unnecessarily instrumented in remixes. A lot of the Persona tracks would have been perfect for a rhythm game, especially a dancing one, as is, so it’s a further disappointment in that regard. Especially since, in some cases, we don’t actually get the original track (at least not in the base game), and only get the remix instead.

If you are someone who plays Persona Dancing (or indeed, any Persona spin off) for the character moments, however—because let’s face it, the prospect of spending more time with our beloved characters from these games is the core appeal of these games to many—then it’s a bit of a mixed bag all around. Persona 4: Dancing All Night had a truly horrendous story mode, that was badly written, unnecessarily expository, and seemed to miss the core point of Persona 4 entirely. The good news is that Persona 3: Dancing and Persona 5: Dancing do not have a story mode as bad. They, in fact, don’t have story modes at all.

It’s a bit unfair to frame it that way—both games, you see, have a “social link” mode, so to say, where you can hang out with each character, interacting with them, usually alongside one other character, which leads to some fun character moments. There’s more than half a dozen scenes for each character, and each character’s every scene has unique unlock requirements pertaining to the actual dancing mode, which forces you to experiment and play multiple songs and hang out with multiple characters, instead of focusing on just your favorite one. Overall, the scenes even have a larger overall story, in a sense—in fact, the stories of both the games end up joining with each other, and even Persona 4: Dancing All Night, which is cool fan service, if nothing else. 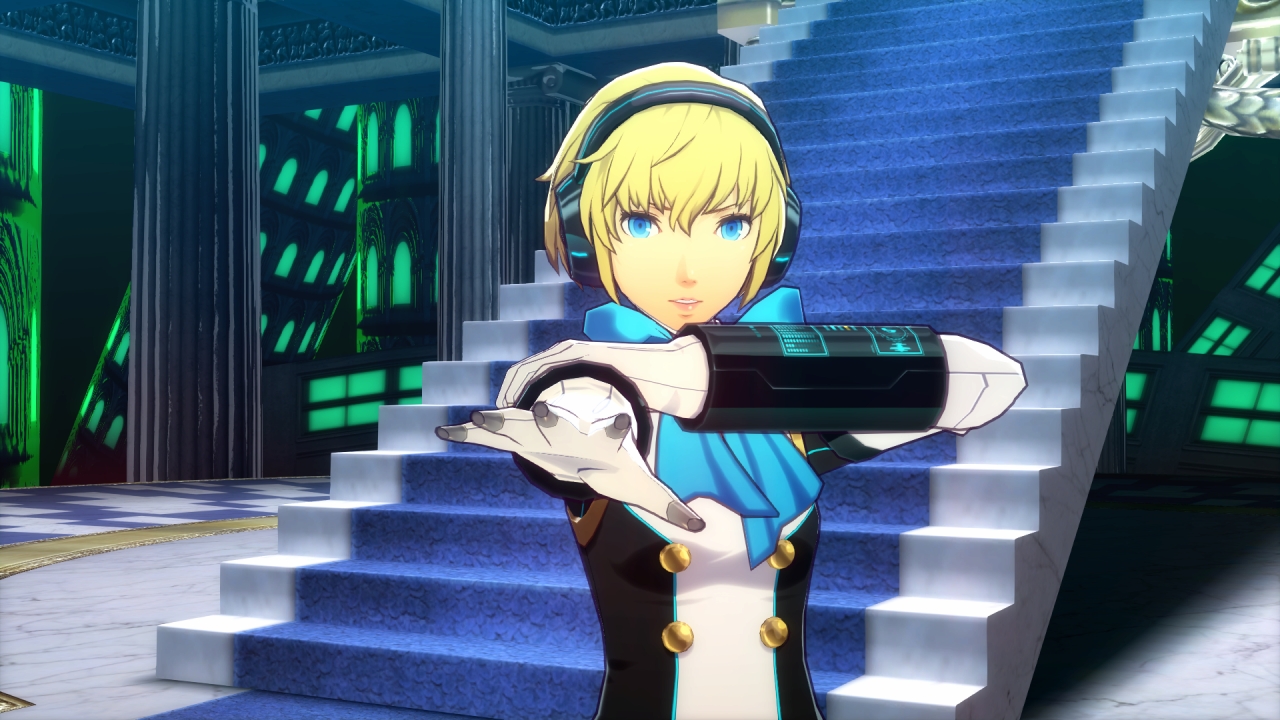 "The characterization, while not as offensively bad as it was in the Persona 4 spin offs, is still pretty bad, reducing every character to a one note trait, which is played up to an annoying degree, and losing any and all nuance that they exhibited in the original games."

There are issues here, too, however: the characterization, while not as offensively bad as it was in the Persona 4 spin offs, is still pretty bad, reducing every character to a one note trait, which is played up to an annoying degree (such as Futaba speaking only in gamer lingo), and losing any and all nuance that they exhibited in the original games. The actual story setup is really bad, too, with the games barely pretending to even contrive a reason as to why these characters are suddenly dancing. And, on the whole, the actual “story” content here is far lighter in both games than it was in Persona 4: Dancing All Night. In fact, I wouldn’t be surprised if put together, it was less than that game. Personally, I didn’t care for Dancing All Night’s poor story mode, so it doesn’t bother me as much—but do remember that each game is giving you less content for more money (given that Dancing All Night was a Vita game, and not full priced as a result).

That said, it’s not like there’s nothing good here. The actual soundtracks are great, barring the poor remixes I have already mentioned, and the games are eye catchingly pretty. A strong art style brings these characters to life, and seeing especially the Persona 3 characters, who have thus far been stuck to PS2 era resolutions, come to life in HD is a joy. The sense of style in both games is astounding, the backgrounds are well drawn, and the colors pop. 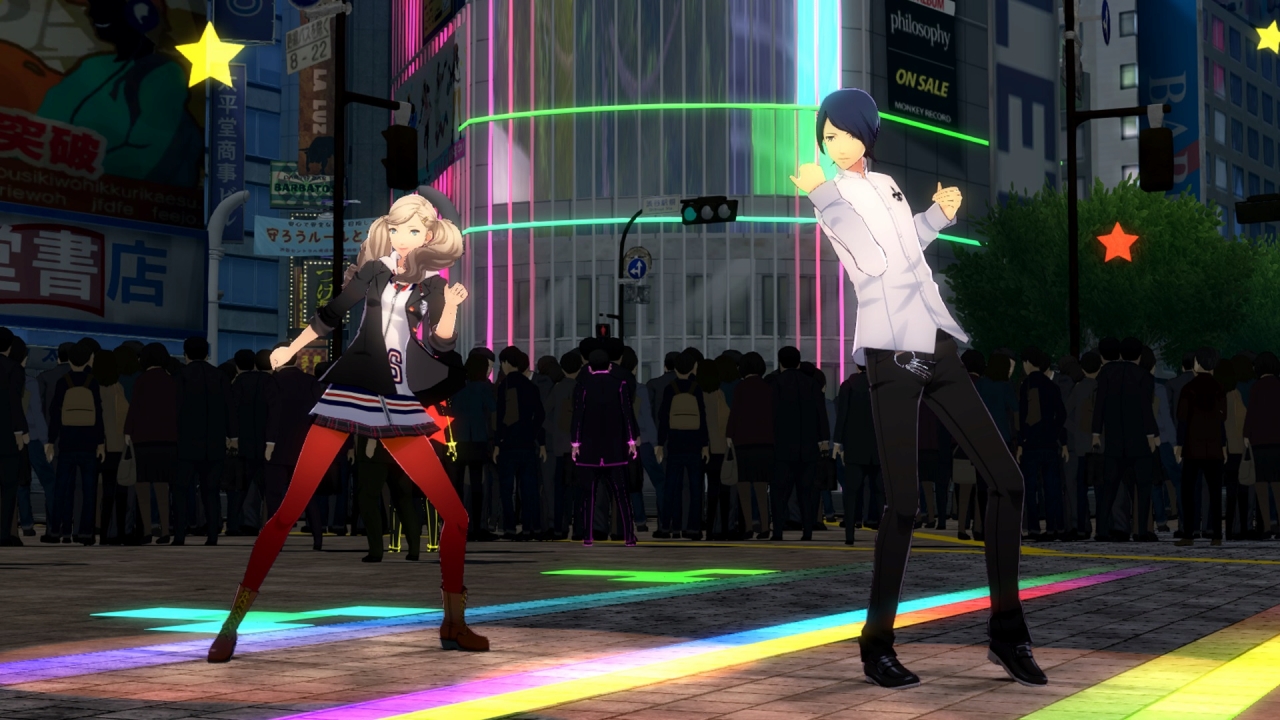 "A strong art style brings these characters to life, and seeing especially the Persona 3 characters, who have thus far been stuck to PS2 era resolutions, come to life in HD is a joy. The sense of style in both games is astounding, the backgrounds are well drawn, and the colors pop."

The actual rhythm gameplay, while not the best, is addictive and compelling—it’s forgiving enough for even a genre newcomer to enjoy it, while challenging enough on higher difficulties, and with some tweaked settings, to truly be enjoyable for the genre veteran too (though I’m not a fan of the six directional input axes for these games, especially on a bigger screen, since it’s harder to keep up with the input prompts).

Certainly, if you enjoy Persona soundtracks, or just want the prospect of hanging out with these characters more, these games aren’t bad. They’re disappointing and underwhelming, but there’s still enough here for you regardless. To me, it’s just a shame that with a pitch that should be as winning as Persona meets rhythm game, Atlus has now, three times in a row, demonstrably droppped the ball.

The list of songs in both games is very short, and misses some obvious inclusions; some of the remixes are awful; characterization frequently misses the nuances that made these characters so beloved to begin with; there is no true story mode; the setup for these characters dancing is offensively bad; there are more songs planned as DLC for each game than there are in the base games

Persona 3: Dancing in Moonlight and Persona 5: Dancing in Starlight are not bad games, and there’s just enough here to make them an alluring proposition for many fans. However, that Atlus only does the bare minimum with a pitch as compelling as “Persona rhythm game” continues to be a source of eternal disappointment.

A copy of this game was provided by developer/publisher for review purposes. Click here to know more about our Reviews Policy.
Tagged With: Atlus, P Studio, persona 3: dancing in moonlight, persona 5: dancing in starlight, PS Vita, ps4