Persona 5 Review – Stealing Hearts In The Most Stylish Way Possible

An extremely well written high school drama that leaves no stone unturned to steal your heart with its top notch JRPG gameplay and phenomenal art style.

Taking place in modern-day Tokyo, Persona 5’s story revolves around dark and challenging topics such as abuse, exploitation and a host of other social issues that are plaguing the game’s world. Without spoiling anything, the player and his band of Phantom Thieves get access to a supernatural mobile app that allows them to enter the minds of the bad guys. The questionable actions of this wicked people have taken the form of castles (known as the Metaverse) and within it lies their unpleasant desires, the “treasure”, the Phantom Thieves need to steal in order to set things straight.

Once stolen, the bad guys will undergo a change of heart, confessing every sin they have committed and turning themselves in. What’s intriguing is that in real life the baddies won’t even know what happened to their Metaverse avatar resulting into some interesting dialogue exchanges when the game shifts from real life to the dungeons and vice versa. Lasting over 90 hours, Persona 5’s story leaves no stone unturned in delivering an exceptionally unmatched experience that doesn’t shy to throw a ton of curve balls at you. It’s quite remarkable that the game’s narrative still manages to hold itself till the very end, delivering plot twists upon plot twists, all intermingled with startling conspiracy revelations. 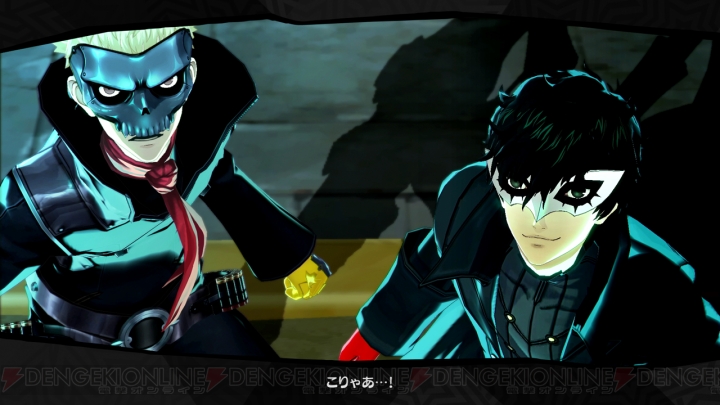 "Accompanying the excellent voice acting is the game’s stellar art style and the attention to detail in its localities such as malls, back-alleys, train stations and movie theatre."

Perhaps what really brings the game’s story to life is the amazing voice acting on display. It isn’t perfect by any means, but it manages to deliver a faithful representation of the character’s motivations and emotions. The main cast’s voice overs are the star of the show and Atlus have also ensured that the supporting cast that form the game’s numerous NPCs are also localized faithfully as well. So overall, the localization is top notch and to be honest this is expected since Atlus puts a lot of emphasis on the quality of localization in their games and Persona 5 is their best effort yet.

Accompanying the excellent voice acting is the game’s stellar art style and the attention to detail in its localities such as malls, back-alleys, train stations and movie theatre. There is something striking about the game’s art style…the clean, simple and cartoonish style along with the use of attractive and bold colors make walking through Tokyo’s downtown an absolute charm. This same consistency in art design is carried on to the game’s main characters and enemies…specially the latter whose design may seem a bit over the top but within the themes of their desires, all of its comes together to add more context to the game’s story. What makes this approach even better is that the art design focuses only what is relevant to the player so the random crowd roaming around in the game’s world lack any detail and it may seem like they have been cut out from a cardboard box but for some reason, it adds to the vibrant and distinctive look of Persona 5. In many ways, the art style is the heart of the game and Shigenori Soejima, the man behind this unique aesthetic should be given every credit he deserves.

However, from a technical perspective, the game seems to have some performance issues. We witnessed some frame rate drops when there were a lot of characters on the screen, however, they were not so bad that they will bring the on-screen action to a halt. It isn’t an experience killer by any means but it’s something to keep in mind if you are averse to such things. The game also seems to suffer from low quality textures, and although the art style does a remarkable job in hiding them, it still manages to pop out here and there. 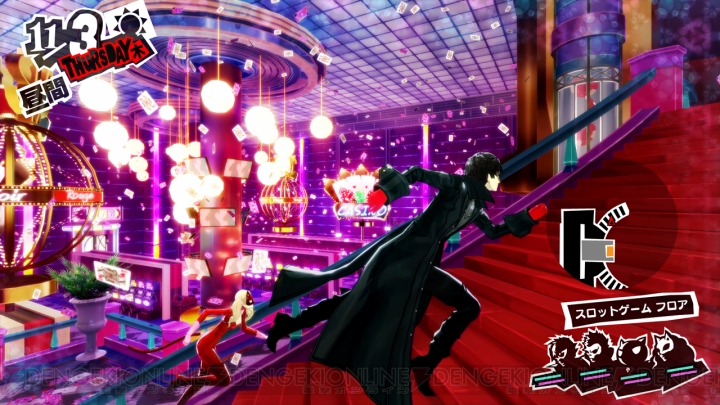 "From a technical perspective, the game seems to have some performance issues. We witnessed some frame rate drops when there were a lot of characters on the screen, however, they were not so bad that they will bring the on-screen action to a halt."

The music in the game, alongside the art style is one of the high points of Persona 5. The JRPG battle theme and the general score accompanying the game’s various activities are well done however they often get repetitive at times. You will most likely the hear the same battle theme over and over again for the first ten hours or so. It opens up to more variations later in the game but we can’t help but wonder if Atlus should have opted for a more balanced approach in this case.

This complain ties in with another issue I have with Persona 5. The game begins on a really quick note, putting you right in the center stage and throwing at you a ton of story elements. This works really well for the first 2-3 hours but thereafter the story takes a back seat for the next 5-6 hours as you tackle a very long dungeon which seems unnecessarily stretched. In short, the game’s first 10 hours have pacing issues but once you are through that, the game opens up and it’s a complete blast from there.

In terms of gameplay mechanics, Persona 5 is perhaps one of the deepest JRPGs I have ever played and the core of that is the persona system. Initially, you will be given a couple of personas which you can use to tackle the early enemies but as you make your way through the game’s several dungeons, you will be able to unlock different variations. There are a number of different ways to have access to a new persona. You can either use the game’s negotiation system wherein the player can demand the enemy’s power. In turn the enemy may or may not agree based on your current skill level (which we will get to in a bit). Once the enemy agrees, you essentially take their persona and use their powers in the battle. Each persona comes with a number of skills but they work best if they are used on enemies that are weak to its effects. Personas can be upgraded and you can also create a more powerful variant by combing multiple personas together. 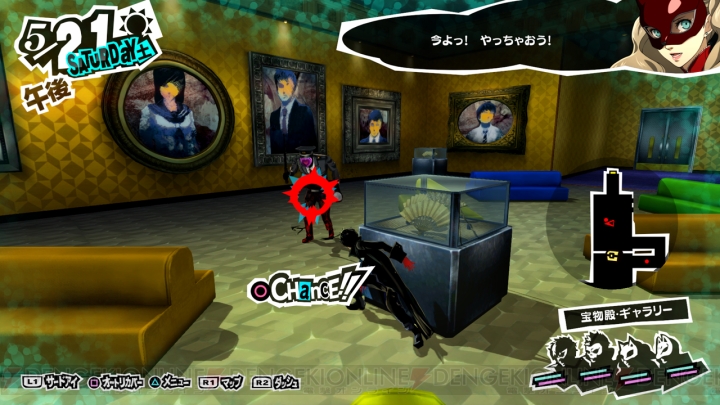 "Unlike previous games in the series, the dungeons in Persona 5 have been handcrafted. If there is anything that divided fans on Persona 4, it was its underwhelming dungeon design and Atlus have addressed all those complains in Persona 5."

Turn based combat is surprisingly well implemented and the negotiation system adds a level of dynamism to it. As mentioned earlier you can ask enemies to become your persona but you can also demand items from them. I found this option to be a great addition since it didn’t force me to quit the dungeon, get back to the real world and buy stuff I need and thereby putting the dungeon crawling experience on hold. Furthermore, enemies can take one of your party members as hostage and depending on your skills, you will be able to either talk them out of it or lose your party member for that battle. There are a host of other variations that goes beyond the scope of this review such passing the baton (which are essentially turns) from one member to another but long story short, Atlus have nailed the combat in Persona 5.

As mentioned before, you can also upgrade your own skills. These include personality traits such as Knowledge, Proficiency, Guts, Kindness, and Charm. These skills will give you the upper hand in some situations. For example, Guts will allow you to select more dialogue options which may result into additional narrative conversations.

Unlike previous games in the series, the dungeons in Persona 5 have been handcrafted. If there is anything that divided fans on Persona 4, it was its underwhelming dungeon design and Atlus have addressed all those complains in Persona 5. Although, the initial dungeon is the weakest in terms of pacing and design choices, others are at an altogether different level. Once again the art style manages to accurately capture the desires of the bad guys in its castle designs. However, stealth mechanics in dungeons feel like an afterthought. Once you are locked into a stealth position, you basically can’t move across the cover…the game essentially uses a snapping system to put the player behind the cover and it doesn’t work well, not to mention the awful camera that accompanies it whenever you are in stealth mode. 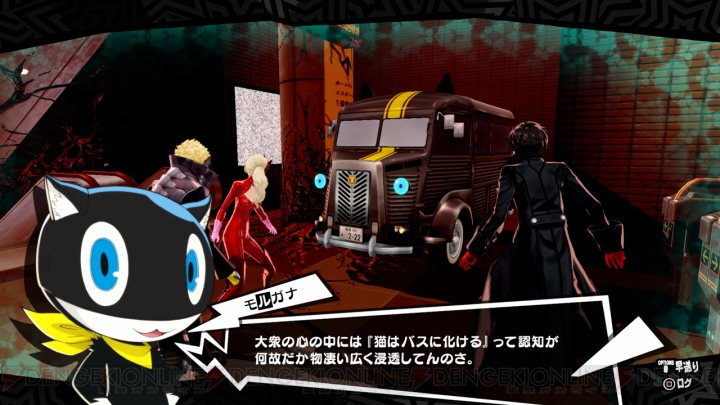 Once you are done with dungeon crawling you can partake in various activities such as hanging out with your confidants, go watch a movie, take your friends for a dinner party…in short the social elements help you to take a breather while you wait for the next story arc to unlock.

Persona 5 is not a perfect game by any means. Its initial story pacing issues, awful stealth mechanics, overwhelming user interface, and camera could annoy some players but in the end they are a minor hindrance when compared to the host of other content the game offers. Deep role playing mechanics, excellent art design, brilliant voice acting and exceptional set pieces in dungeons make Persona 5 one of the finest JRPGs of this generation.

Stealth doesn’t work as intended and the related camera issue arising due to it is annoying, initial story pacing issues, takes around 10 hours to really get going.

Persona 5 represents Atlus’ best work yet, a masterpiece that keeps on giving back to the player and is unlike anything you will play on your PlayStation 4.

A copy of this game was purchased by author for review purposes. Click here to know more about our Reviews Policy.
Tagged With: Atlus, Persona 5, ps3, ps4