Persona 5 Strikers is a worthy follow up to the Phantom Thieves' original outing.

Ever since Persona broke out with Persona 3, and we started getting a glut of spin off titles to accompany each numbered, mainline release, there has always been a very strong and clear distinction in the quality and aesthetic of a mainline Persona game, and a spin-off. Even when said spin-offs play well, their quality of writing and gameplay is a dramatic step down (and apart) from what the mainline games are like. No one, for example, would confuse the plot of Persona 4 Arena or any of the Persona Dancing games for the mainline titles. No one would say they play much like the mainline games either.

Persona 5 Strikers is the first time that hasn’t held true. While I’m not going to go as far as to claim that Strikers is every bit as accomplished and great as a numbered Persona series game, it feels very much like it belongs alongside them. The quality of writing (for narration and characterization alike) is about on par with Persona 5 (though the story obviously does feel like it has to set up several contrivances to justify a continuation of a story that was concluded in the original game, of course), and while the gameplay is so many ways not like Persona, it feels like it is channeling it – and that’s the important part in making a game like this feel authentic, which none of the previous Persona spin offs have truly succeeded in doing.

"Omega Force and P-Studio have done such a remarkable job in thoroughly Personi-fying the game (so to say) that it feels more like a real time action take on Persona than a Persona take on Dynasty Warriors."

It’s actually a feat that Strikers manages this. Its conceit is supposed to be Persona Warriors – in that, yes, it’s a Persona take on the Dynasty Warriors series and formula – but developers Omega Force and P-Studio have done such a remarkable job in thoroughly Personi-fying the game (so to say) that it feels more like a real time action take on Persona than a Persona take on Dynasty Warriors. Battles are real time, but rather than indiscriminately fighting large mobs, they are still contained encounters within dungeons in the Metaverse. Physical attacks are present, and when you’re using just those on enemies is when Strikers feels the most like a Warriors game. But you can also instantly summon your Persona (and in keeping with Joker’s Wild Card ability, even switch between multiple ones when you are playing as him), use their attacks (each with their elemental affinities), use guns, cause 1-More attacks by exploiting elemental weaknesses, launch All Out Attacks, tag team a party member (yes, there are party members) with Baton Pass, and launch the spectacular, battle ending Showtime attacks that debuted in last year’s Persona 5 Royal. So yes, the battle system is real time rather than turn based, but it feels like such a natural translation of the Persona battle system into a more action driven style that you can even see elements of this leaking back into the mainline Persona games in the future.

Take, for instance, the ability to use your environment in battles. Now, use of the environment by the Phantom Thieves is something that Persona 5, and especially Royal, emphasized. You could grapple to traverse the dungeons, you could use the layout of the room to take cover and hide, and launch into ambushes against enemies, and so on. But you could never actually use anything in the environment in the battles themselves, something that Strikers allows, from letting you grapple to a high point and launch down on enemies from there, to causing destructible objects to break and dish out massive damage in the process. And this, while not being a part of the original title, again feels like such a natural and effortless extension of that game that you would easily be forgiven for thinking that it had been there in some form or another. A few months ago, I marvelled at how authentic Hyrule Warriors: Age of Calamity felt to Breath of the Wild, and it did, but it is honestly nothing compared to what Strikers manages on that front.

The impressive thing is that Strikers manages this while still retaining some of the Dynasty Warriors DNA. I’ve already mentioned how taking on mobs with purely melee attacks recalls the Warriors games a lot, and so it does, but there are also the big boss enemies with shields, which must be broken by exploiting their elemental weaknesses repeatedly, before finally launching into an All Out Attack. So even fans of the conceits and mechanics of the Dynasty Warriors games still have something to enjoy here – but the impressive thing is that the substantial number who don’t care for those games don’t have to worry about putting up with anything from those titles they may find off-putting. 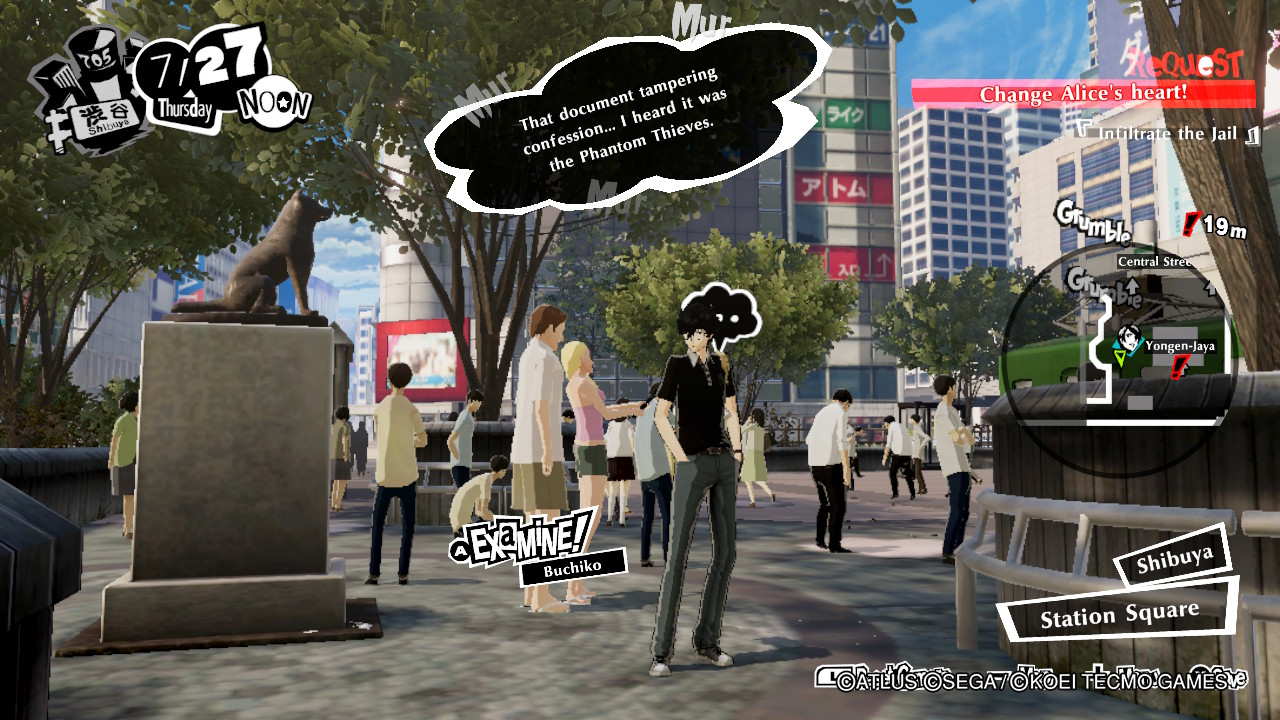 "Strikers manages to do an admirable job of keeping the game friendly to newcomers who may not have played the original (a necessity, when you consider the game is also on Switch and PC, which as of right now do not have Persona 5 or Royal) – while a lot of the references to the original, and smaller details, will be lost on newcomers, Strikers is a reasonably standalone story that can be enjoyed without having played Persona 5."

In other ways, too, Strikers feels right at home as a Persona game. The calendar system, with its time management and social simulation aspects, isn’t quite here except for superficial lip service paid to it, but you still get the ability to spend time with your friends, increase your bond with them (to gain benefits in battle, in true Persona fashion), there are still activities (though not quite as many as in Persona 5 or especially Royal), side quests in the form of requests for you to complete, Persona fusion to create newer and stronger Personas in the Velvet Room, and even investigations of your target in the cities as you try to gain crucial intel on them before you go plumbing into the depths of their psyche in the Metaverse.

In terms of the presentation aspects, too, Strikers could pass for being Persona 5. It has that same effortless and fluid sense of overwhelming style, in everything from character design to art style to the goddamn menus, that that game came to be known for. The music, which is a mix of remixes from the original game, and new compositions, is very decidedly Persona (and expectedly fantastic). And while I noted before the calendar system is gone, you still get to see the time of day and date progress in a very distinctly Persona 5 style UI.

As I previously noted, the story and writing is great too – if not quite as great as the original game, obviously. The characters in Strikers feel authentic to the people you cane to know and love in the original game, rather than representing flanderized caricatures that the Persona 3 and 4 spin offs often turned their characters into, which makes their return here feel more meaningful and substantial.

It actually does feel like you are getting to spend more time with them, rather than fan fiction takes on them. The story itself is a pretty compelling continuation of the original, though it does suffer from having to explain how a continuation exists at all when the plot was so thoroughly wrapped up by the end of Persona 5. Surprisingly, however, Strikers manages to do an admirable job of keeping the game friendly to newcomers who may not have played the original (a necessity, when you consider the game is also on Switch and PC, which as of right now do not have Persona 5 or Royal) – while a lot of the references to the original, and smaller details, will be lost on newcomers, Strikers is a reasonably standalone story that can be enjoyed without having played Persona 5 (though obviously, it is preferable that you do play that game, if only because it is one of the greatest games ever made). 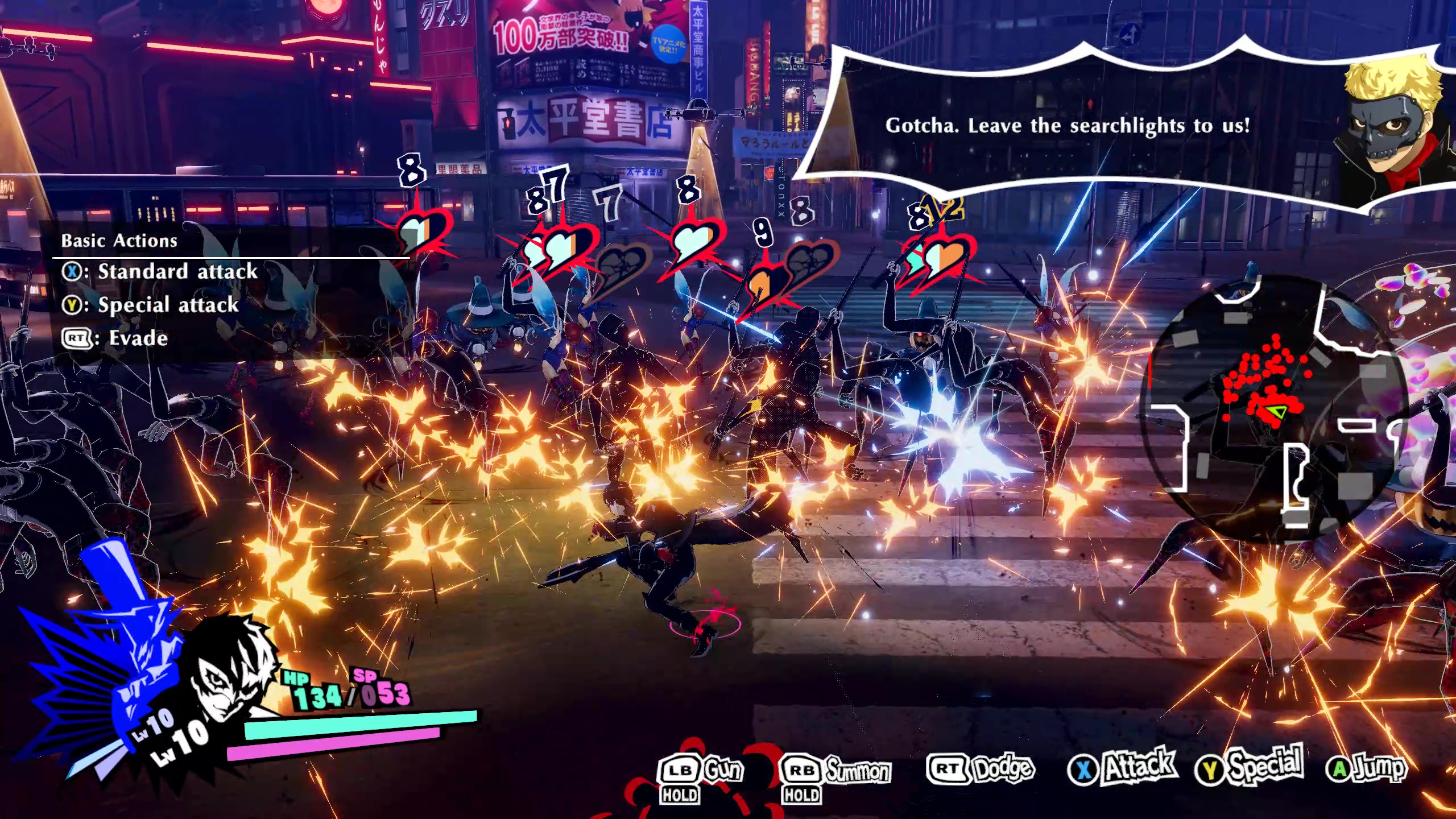 "While it makes several missteps, then, Persona 5 Strikers is a decidedly great game, and a compelling addition to its series canon on its own merits."

Graphically, while Strikers executes Persona 5’s art style with aplomb, it does ask for compromises from the player. On the Switch, the image quality is obviously lower and softer, and the game runs at a (surprisingly consistent) 30fps; on PS4, you either get the option to get a clean image in a graphics-focused mode, but cut down the framerate to 30fps, or to keep the gameplay at 60fps, but get a much jaggier image in return. On PC, of course, the image quality will be contingent on your machine.

Strikers also has surprisingly long loading times (another relic from the Dynasty Warriors games, it seems). On PS4, these can be 5-10 seconds for a fair few transitions (which can be awkward when you’re entering or leaving the Metaverse). On Switch, import impressions seem to indicate the loading times can go as north of 20 seconds in the most extreme cases. On PC, again, your experience here will be dependant on what the specs of your rig are.

While it makes several missteps, then, Persona 5 Strikers is a decidedly great game, and a compelling addition to its series canon on its own merits. It is not only the best Persona spin off so far (though that isn’t a high bar to clear), it is also great enough to warrant people playing it for what it is, rather than just being fan service for people who liked the original game, like most other spin offs are.

It’s a remarkably good translation of Persona tropes into an all new format, and it presents some intriguing possibilities for what a future Persona game might offer. It feels like a full fledged, mainline sequel to Persona 5, which is what Atlus bills it as – it earns that moniker, unlike the previous spin offs. Even with its issues, Persona 5 Strikers is a great game, and an excellent continuation of the Phantom Thieves’ story. Hopefully this indicates a brighter future for the quality of Persona spin offs.

Excellent translation of Persona gameplay concepts into a more real time action combat style; quality of writing and storytelling that mirrors the original game's surprisingly well; excellent art style and soundtrack; standalone story that can onboard newcomers as well as cater to existing fans

Surprisingly long loading times; graphics demand some kind of trade off from players in one form or another; the lack of series staples such as the calendar system may disappoint some fans

Final Verdict:
GREAT
Persona 5 Strikers is not only the best spin off for the series to date, it's a surprisingly great game on its own merits, and worthy of the "Persona 5-2" marketing it has received. Newcomers and fans alike will find a great game to enjoy here.
A copy of this game was provided by Developer/Publisher/Distributor/PR Agency for review purposes. Click here to know more about our Reviews Policy.