PES 2018 Interview: ‘Our Focus Is To Keep The Action On The Pitch’

Global Product Manager Adam Bhatti is hoping for a goal with PES 2018.

Developers PES Productions have struggled for years to get the formula for Pro Evolution Soccer down to perfection. And with a checkered past of hits and misses, it’s always up in the air as to what we’ll receive with each new installment. However, the last few years have been different and once again this year’s entry seems to be looking up. With a  series of upgrades and improvements, Konami may have figured out the strategy into making the football game they strive for.

We had a chance to sit down with Global Product Manager Adam Bhatti to figure out just what magic they’re hiding out on the field.

Can you tell us how the new career mode will work in PES 2018, especially after the acclaim that EA’s FIFA 17 received for The Journey?

We have Football Life which is the master league, which is the game’s career mode. We have the single player mode which is called Become a Legend. What we’ve done with those two is we have added the presentation element, scenes where players are talking to you. I think what you see from The Journey from EA is a huge focus on the single player story, which takes you away from, I guess the football side of it. It brings kind of a world element. Our focus is to keep the action on the pitch. Keep it around football for now. Those in the storytelling are not where we’re at right now. That’s where we’re a little bit different. Our tagline is “The pitch is ours.” So that’s probably where we’re going to be going for the next few years as well.

Besides Usain Bolt, which teams, stadiums, players, etc. can we look forward to this year’s PES 2018, and what are the new additions?

Nothing to say right now, but I can assure you we’ve got a lot to announce. We just wanted to focus on some really, really big announcements. Let the game have its moment and then we can start talking about different players and legends. Legends are really important to us. We recently brought them in last year, and were really going for a big second year.

The PES 2018 interface will apparently have more of a broadcast feel this time. Could you explain its overall look and how it will differ from last year?

The biggest thing is when you first play the game it’s a brand-new mode, which is where the scores and the teams are kept. What you’ll notice with that is how, during a match all the information , how it’s given to you, it’s given to you in different ways. Usually when you’re playing a sports game, as soon as you do an action something related to the action will sort of pop up and say, “you’ve had five shots on target.” This year we’ve kind of rebuild that whole system, where you actually get the commentators talking to you about it. You’ll get the real player images popping up as well giving you a more authentic feel. We have brand-new replay angles, and presentation within the replays. What that means is leading up to a goal when someone is making a decisive past, or a key pass, the counter will slow and turn and go normal speed again. It’s all about making it feel like you’re watching TV.

"I think what’s really important with strategic dribbling, is making it extremely responsive and instinctive how you play. While there’s new systems, brand-new animation systems, brand-new logic systems, the AI, the brand-new system is working with player abilities and individuality of them as well."

How are PES 2018‘s animations and lighting systems improving in this year’s edition?

It’s a different world. In terms of difference as well as how much work we have done to those setting, it’s all about really looking at how we can utilize this engine even more. So we had three years where we kind of got used to it, but we knew there’s a lot of other companies out there working on a new engines. We had to raise the game to sort of keep up. We spent a lot of time, a few years working on that. The result was brand-new lighting tech. What really helped was going to the stadiums themselves. Capturing it during  different times a day, and being then able to replicate that against a game. It’s always super accurate to see it in real life.

What new changes and features can be expected for myClub?

So myClub right now, what we’re talking about is its  integration into PES league. eSports, as I mentioned, is really important to a lot of people, not just us. But myClub is a key mode that we brought into PES a few years ago. And it’s gone from strength to strength. So what we’re doing with myClub is that, obviously is all the new player images which makes myClub seem authentic as well. And we’ve change the auction system as well. We’ve gotten a lot of feedback from our fans.

How do the new control systems, including strategic dribbling, add on to the overall fluidity of the game? How does this improve the overall ebb and flow of matches while maintaining realism?

I think what’s really important with strategic dribbling, is making it extremely responsive and instinctive how you play. While there’s new systems, brand-new animation systems, brand-new logic systems, the AI, the brand-new system is working with player abilities and individuality of them as well. What we wanted to do was make everything extremely contextual. So you’re not really thinking about these things going into play, but you feel them. So you’ll feel when your dribbling with a superstar, you’ll feel what you can and can’t do based on the way you feel with the player, based on the control. So I think that the new system is completely a changed game, because it just makes you think in a completely different way. But it doesn’t complicate things. It’s not about holding a button and doing that. It all happens as you’re moving the player.

How has the artificial intelligence changed in PES 2018 this time around? What improvements were implemented to make it more realistic?

With the AI we’ve had a lot of feedback that the players kind of played the same. Their abilities didn’t seem to matter. The covering was sometimes too hard-core. So it was really difficult to break teams down and it wasn’t kind of a natural flow. As soon as the teams lost the ball they tended to go into a shape. Because of the space pitch, one key thing is that we made the player small and the pitch bigger. So that mobility between the space is much more exaggerated. So you can’t see players  at the halfway line and zoom all the way back to the edge of the box, and make it super difficult. Another thing the users wanted us to do was to change how the AI, not only defended but attacked as well. Meaning attacking space, taking a risk, running towars the ball, and leaving the space now and again.

It seems that the PC version will finally get the love it deserves for PES 2018. What kind of enhancements we can expect so it shines above the console versions?

Not in terms of feature set. But certainly in terms of visuals and fidelity. We are working with Nvidia a lot and using their GeForce office cards, which are quite expensive. But if you do have one your PES game will be in a whole new light, well above PS4 and Xbox One. 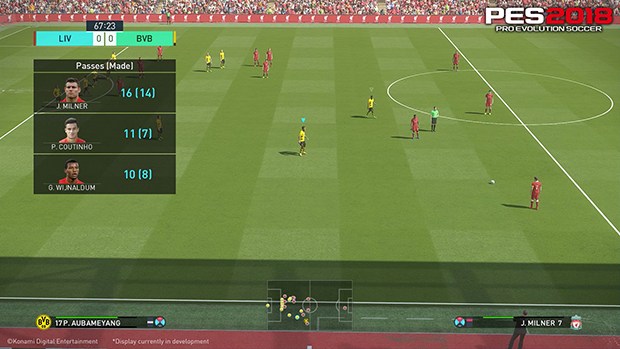 "We haven’t been able to provide an [online] experience where everyone is happy. And this is the key reason why we’re doing an online beta this time."

Do you have any plans to support the PS4 Pro version with improved visuals? May be higher frame rate or resolution or improved graphical effects?

Right now we’re committing to 4K for PS4 Pro. Any of the other features we are not ready to announce right now, we are still testing but we are guaranteed to launch with 4K.

Is that including Xbox One X when it launches?

What will be the frame rate of PS4 Pro?

Xbox One isn’t at the level right now. That’s not to say it won’t reach it. But right now it’s not.

Do you have any plans to bring PES 2018 to the Nintendo Switch? If not, can you tell us why? Is it due to its weak processing power?

On a personal level  I would love to. I personally love the Switch.  Right now, we have only announced the game. I don’t want to say, “no” because that’s not true. And I don’t want to say, “yes” because that’s not true as well. So it’s a difficult one to answer. I guarantee you every developer would be like this. Everyone is now, “hmm,” because it’s doing fantastic. Absolutely fantastic.

The addition of 11v11 online matches in PES 2018 sounds good but there must be some serious hurdles to implementing this in terms of matchmaking, netcode, etc. How have you worked through these issues to provide a strong user experience?

It’s been difficult actually. We haven’t been able to provide an experience where everyone is happy. And this is the key reason why we’re doing an online beta this time. The online beta is coming at the end of July, mainly because you’ve heard people complaining for the last few years about the stability not being good enough, the matchmaking not being good enough. We’ve had to, at times widen the matchmaking window to get more people in and just so we can catch people. That obviously will match you against people that you don’t want to be matched with because they have a different style or different connection. And that causes your experience to lower as well. So it’s something that we’re working on a lot right now.

PES 18 will have eSports integration but what does that mean in terms of spectator options, match options, etc.? What is Konami doing to ensure its smooth transition into eSports?

In terms of spectator options we are working with a few eSports companies. I can’t actually named them. What we focused on this year, when it comes to PES league is the integration across all our modes. When it comes to the spectator mode and all of the expected functionality from the user watching it…there is nothing to announce right now. I’m not sure if it will be integrated at launch. It’s something we will be able to talk a little bit more at Gamescon. Gamescom is when we’re hoping we are on track to announce everything that we’re doing with eSports.