Pikmin makes a glorious return, but it’s haunted by a consistent feeling of deja vu.

Nintendo’s reputation is largely pinned on the trinity of Mario, Zelda and Metroid. There is much more to the big N under the surface though, with plenty of series outside of the public eye that exude just as much charm as Nintendo’s big three.

Pikmin is one such franchise that maintains a cult following from its two Gamecube instalments in 2001 and 2004. After a hiatus, Pikmin returns as the first Wii U exclusive aimed at the hardcore gamer. More of the same makes Pikmin 3 a returning delight for fans, but this lack of innovation is a tiring trend that is creeping into too many of Nintendo’s first party titles as of late.

You control three explorers from the planet Koppai. A domestic food shortage forces them to explore a nearby planet for sustainable food, but they get separated from their ship and each other on the way there. What follows is a quest for survival, oversized fruit and the drive module required to leave the planet safely. The eponymous Pikmin return as you explore, marking the game with the usual mixture of puzzles and exploration that define the series. 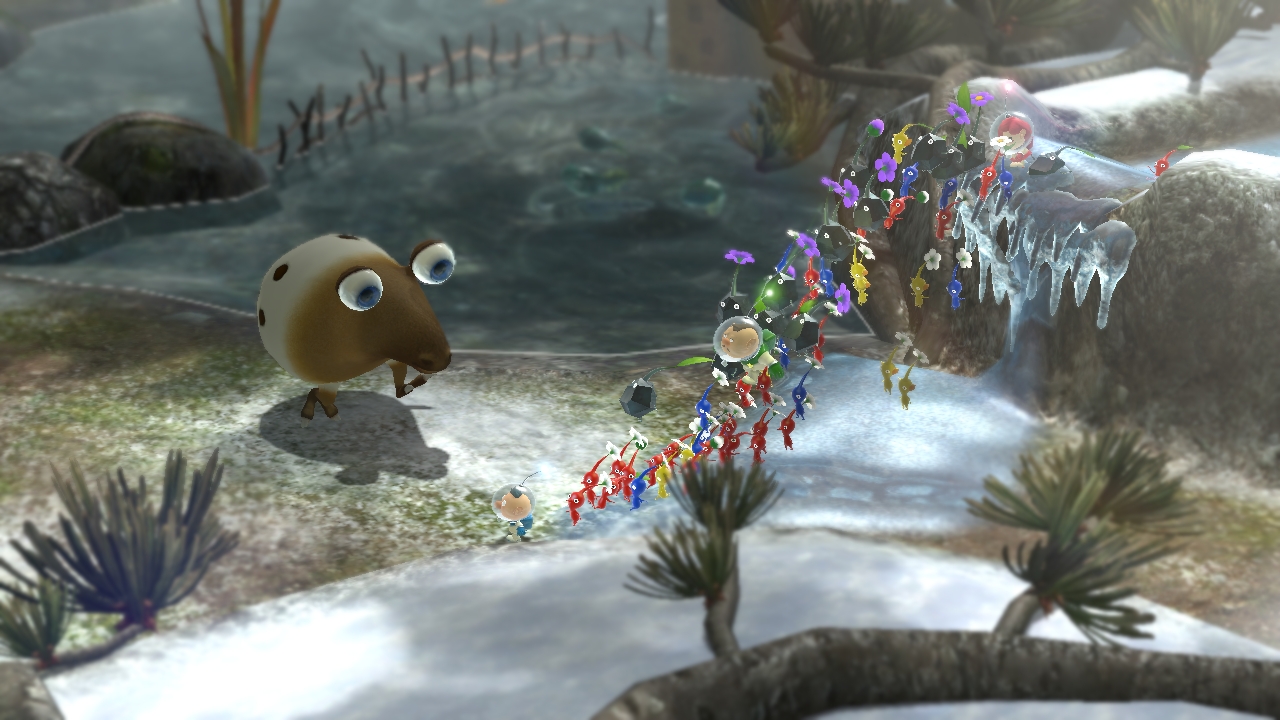 It’s in the basic mechanics that Pikmin 3 makes its only definable change to the series. You only control your team of explorers, but you can give the Pikmin basic orders by throwing them at objects and enemies. With different coloured Pikmin offering unique abilities, the majority of puzzles revolve around sorting and managing your Pikmin with maximum efficiency.

"Pikmin 3's other attempts to improve on the series are similar; successful, yet ultimately flat. You now control three human characters, swapping between them for more advanced Pikmin management and puzzle solving, but it hardly redefines the formula."

Red, Yellow and Blue Pikmin return from the previous games, joined by two new variants. Rock Pikmin can smash through tough barriers and glass, but only deal real damage when initially thrown. Pink winged Pikmin are arguably more interesting, being capable of fighting and moving objects in mid-air. They certainly mix things up but, with only two new Pikmin types, Pikmin 3 doesn’t exactly re-invent the wheel with its core mechanics.

Pikmin 3’s other attempts to improve on the series are similar; successful, yet ultimately flat. You now control three human characters, swapping between them for more advanced Pikmin management and puzzle solving, but it hardly redefines the formula. Likewise, levels are bigger, better and more complex than ever before, but they look and feel almost identical to previous maps in the series.

The same small scales, the same forests and the same enemy types await you in the grand, but repetitive return of Miyamoto’s pseudo-gardening sim. Pikmin 3 gets away with a lot due to the series’ charm and solid gameplay design, but this third instalment is starting to draw out and protract the formula in ways that it struggles to justify. 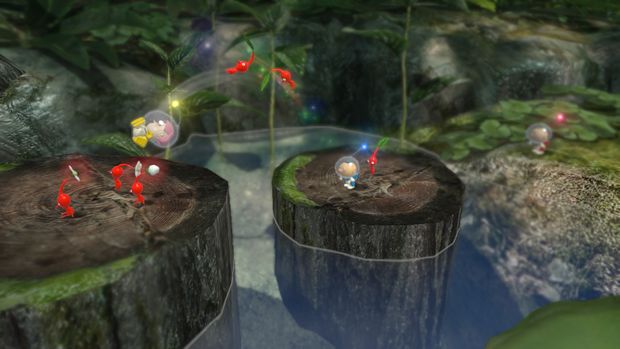 Part of the problem is the hopes pegged on Pikmin 3. It might be considered unfair to judge a game on the hype drummed up around it, but the fact remains that Pikmin 3 fails to really utilize the Wii U hardware. I had hoped for some light touch screen Pikmin control and, whilst the Gamepad screen does display a map with tactical information, it doesn’t offer the tactile control that could have transformed the series’ gameplay.

"It certainly looks great in motion, but I was expecting a slightly higher visual fidelity from Pikmin 3. The sound makes up for this though, offering a pleasing deluge of sci-fi timbres alongside the cartoon sound effects Nintendo are always so inventive with."

Controls are generally disappointing, with the Gamepad and Pro Controller setups feeling like you’re moving a cursor more than a character. Wii remote controls serve better in this regard, but this prevents you from having any control of the camera. It’s a bit harsh to criticise a game on what it lacks rather than what it has, but this does feel like a missed opportunity.

Pikmin 3 also falls foul of another consistent Wii U criticism: Its graphics are a mixed bag. The visual design has the usual appeal you would expect from a Nintendo game, but character models and textures look a little grainy as you get up close.

It certainly looks great in motion, but I was expecting a slightly higher visual fidelity from Pikmin 3. The sound makes up for this though, offering a pleasing deluge of sci-fi timbres alongside the cartoon sound effects Nintendo are always so inventive with. It doesn’t look bad, by any means, but there was definitely room for smoother visuals. 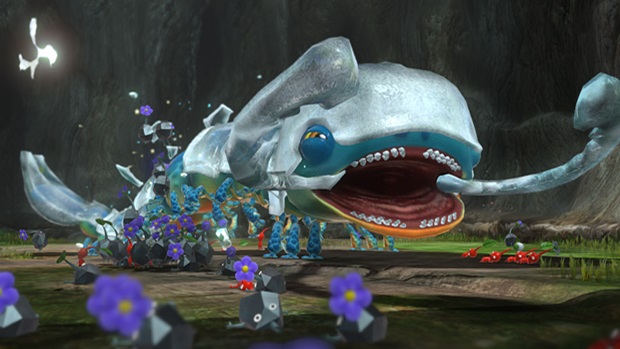 I’ve focused on the negatives so far, but there is a lot of good in Pikmin 3. The incredible sense of exploration prevails from the previous games, with the well balanced maps and puzzles providing a terrain that is rife with discovery. The day structure is still in place, with your explorers needing to get off the planet’s surface at night fall to avoid the native predators.

"The main story is a bit on the short side. It's certainly a case of quality over quantity, but a few extra hours on the campaign would have made a big difference to Pikmin 3's value for money. "

It keeps you on your toes, as any Pikmin unaccounted for perish in the nocturnal melee. I have my problems with the structure as, with the days being so short, it often kills any sense of continued exploration. It certainly reigns as an engaging mechanic, but don’t expect Pikmin 3 to be a particularly flowing example of exploration and puzzle solving.

The main story is a bit on the short side. It’s certainly a case of quality over quantity, but a few extra hours on the campaign would have made a big difference to Pikmin 3’s value for money. The game is bolstered by a variety of missions you can tackle solo or in co-op and, whilst they are fun, they aren’t quite as intricate as you might be hoping. Still, the inclusion of the versus Bingo Battle mode is surprisingly engaging, playing to the strengths of the series effectively. Both players get a bingo card with various enemies and fruits printed on it. 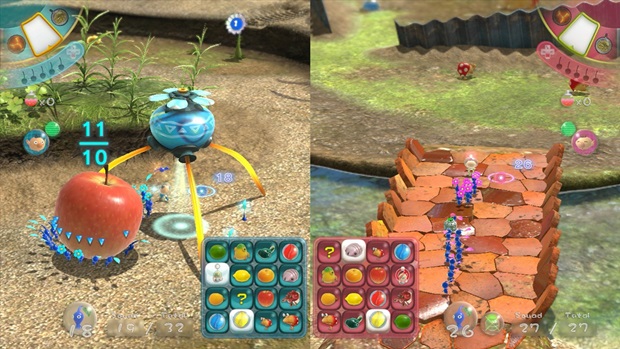 The player to find and move all the fruit and enemies on their card back to base wins. It’s a very Pikmin multiplayer mode and, though the lack of online play is lamentable, it’s a fun addition to the main story. It doesn’t entirely solve the lifespan problem, but Bingo Battle is a confident step in the right direction.

Pikmin 3 is a good game, regardless of how you look at it, but Nintendo need to be doing better. For the father of Mario and Zelda himself, it isn’t enough for his game to be merely good. The third Pikmin is more of the same and, whilst this is a delight, Nintendo’s conservative design choices prevent it from becoming the system seller the Wii U deserves.

Structure limits exploration, Quite short, Few additions to the Pikmin formula, Visuals could be crisper

A cult Nintendo franchise makes a competent return, but a lack of major innovations stops Pikmin 3 from becoming the killer app the Wii U needs.

A copy of this game was provided by developer/publisher for review purposes. Click here to know more about our Reviews Policy.
Tagged With: Nintendo, pikmin 3, review, wii u