Posted By George Reith | On 18th, Apr. 2011 Under Reviews | Follow This Author @GNReith

This shall be a short review for a short and sweet piece of content for everyone’s favourite Pinball game on the Xbox Live Arcade. The Mars Table adds an intergalactic themed level to the ever-expanding Pinball sim featuring a suite of side missions, along with the usual social systems and leaderboards that made the game so addictive in the first place.

The Mars table immediately starts as it means to go on by looking good. The theme is simple and instantly appealing, with the mechanical spaceships and robots all moving with a grace and fluidity that other developers would struggle to achieve. The sounds too are in keeping with the whole dynamic, and add to the sense of immersion. Or at least, immersion as far as a pinball table goes.

The table is laid out well, with the objectives and side missions you can activate being quite clearly labelled at the start of each game. The problem comes in that, despite this sign-posting, I still found many of the missions to be quite obscure in their origins. Activating the right ones felt more like luck and less like skill. I’m sure there are those who would counter saying that this is a part of the game but, whilst this holds true, it’s still not a part of the game I’m especially fond of. 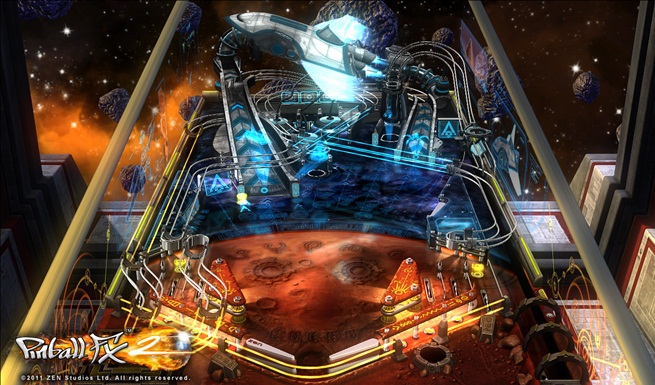 It’s a bit more classic than some of the wackier game tables, but it’s enjoyable all the same

Despite these minor complaints, the table is still a lot of fun to play. Part of this is just the simplistic charm of Pinball FX2 itself, but you’ll keep trucking on to get that high score all the same. It’s simple and addictive gameplay at its best. The thing I would warn potential buyers about is the sparsely laid out nature of the table. There’s stuff to do for sure, but it seems rather classic in comparison to some of the more wacky designs of the other tables in Pinball FX2. It’s not a bad thing as such, but those who were fans of the Biolab and other such tables shouldn’t expect the same treatment here.

My only major gripe with the table is its pricing. Admittedly, this is more the fault of Pinball FX2’s overall pricing strategy and nothing do with the table itself. Regardless of this, 240 MS points just seems a little steep for one table. Maybe it’s just because I’m not really the type to get sucked into constantly trying to obtain the highest scores, but I just can’t imagine a single table occupying enough time to justify the point of entry; as meagre as it is. If you love your pinball and have no qualms about the price then consider the Mars table worthy of your time.

Poor pricing, Some obscure missions and objectives, Sparsely laid out in comparison to other FX2 tables

The XBLA's best pinball sim just got bigger with the Mars table. A slick and well designed table overall, it is only let down by some sparse pacing and a questionable pricing strategy

A copy of this game was provided by developer/publisher for review purposes. Click here to know more about our Reviews Policy.
Tagged With: Pinball FX 2, XBLA, xbox 360