Being a game critic isn’t always fun and games (excuse the pun). Aside from legions of immature fan-boys questioning your mothers sexual decency every time you disagree with their opinion you are also cursed with having to play through some really awful titles from time to time. It’s not like reviewing a CD or a film, you have to actually force yourself to work through these games that can sometimes last as long as twelve hours. Playmobil: Circus was one of these games, and I can only thank the powers that be that it was quite a short game to get through. Playmobil: Circus embodies everything I detest about the Wii; from the fact that it is yet another mini-game compilation, right down to the dodgy motion controls that make it practically unplayable.

You inhabit the body of a generic circus performer in training and must practice your acts at circus school and then eventually work your way up to performing a full show. What this actually means is that you have to repeat all the mini-games two or three times. Good start. The games are sometimes rhythm based, at other times relying on the pointer and sometimes they revolve around an all out waggle session. I won’t run through all the games in detail as there are actually quite a few of them; sixteen in all, to be precise. The rhythm and pointer based games are just about passable, but some of the waggle games are just awful. The main reason being that they use the remote in ways that it just shouldn’t be used. One game in particular sees you moving a lollipop into a lion’s mouth and then snatching it away just as its jaws close for points. The problem occurs in that both actions are achieved by thrusting the remote forward or backward, and the Wiimote just feels horribly inaccurate across this particular axis. The use of the nunchuck is also poorly prioritised, often requesting precise and complex movements from what is, arguably, the least accurate part of the Wii controller. 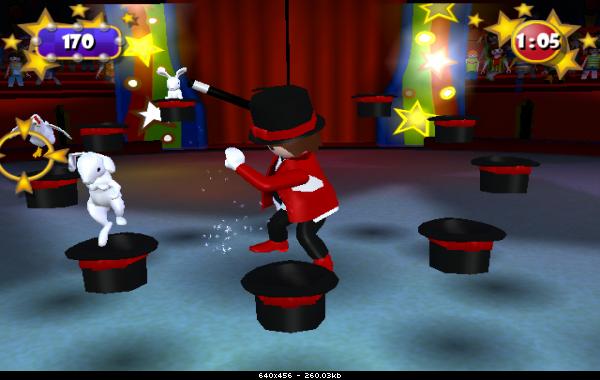 For my next trick I shall conjure up another uninspired mini-game!

So after getting frustrated many times due to the fact that the Wiimote will not register down movements (you know what I mean), you can move onto doing a show once you’ve achieved a certain score in the practice mode. The show basically consists of you doing four or eight games in a row, but with a different backdrop. It is quite a poor attempt at lengthening the game, and the mini-games themselves become boring enough without being forced to repeat them. If you score high enough during the show then certain encore games can be unlocked as a reward. I say reward, but it would be like rewarding an honest days work with a kick in the balls. The encore games are even worse than the normal ones, and are often horribly long-winded to boot. As if this wasn’t annoying enough, the encores can’t be done co-op, so if you’re playing co-op mode one of you must sit out every time an encore occurs.

Co-op is one of the two multiplayer options available, but neither of them alter the game in any meaningful manner. Co-op basically sees you and a friend doing exactly the same thing you do in the single player mode, but at the same time. Head to head mode isn’t much better, as you just play the solo mode except you take turns. Why you would want to subject anyone else to this torture however, is anyone’s guess. 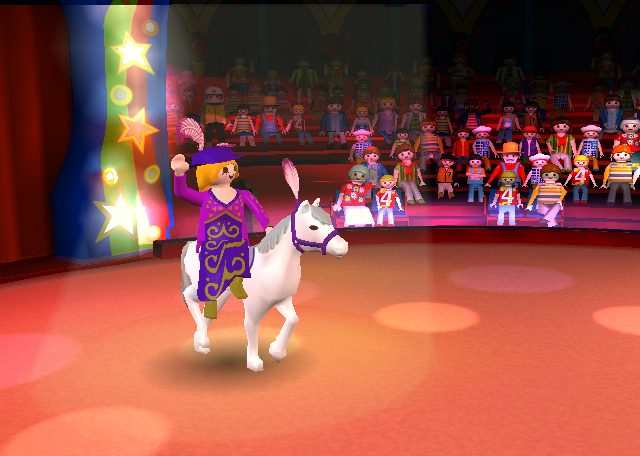 Even when you are not plagued by an imprecise control scheme the game offers a reasonable challenge, especially if you wish to go for the high score. This is where Playmobil: Circus seems to not know its target audience. The average Playmobil fan is probably below the age of nine, and I’ll come right out and say that no nine year old will be getting the high scores on some of these games without some serious practice. It’s not a problem as such, but it does seem odd that a child’s game would pack such a punch.

While we’re on the topic of the use (or misuse as the case may be) of the Playmobil license, it must be asked, why was it needed? I think the only meaningful explanation is that it was done so the design team could skimp on the animation and graphics. That said the graphics are reasonably pleasant for a budget game and the plastic feel of the Playmobil figures comes across well and suits the style of the game. The visuals aren’t particularly ambitious, but they do the job fairly well. 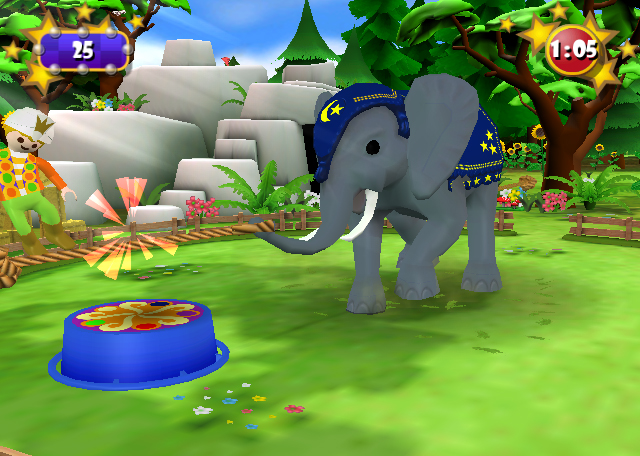 Things become a bit more questionable when we move on to the aural aspect of the presentation. If the audio for Playmobil: Circus were part of a police line-up, I would definitely consider it one suspicious character. The gibberish voice acting is lazy and pointless, although I must admit I didn’t really have any valid pre-conceptions of what Playmobil figures should sound like. The sound effects too are repetitive, clumsy and just plain annoying. The most suspect part of the whole thing however, is the music. The hip hop aspects of the music should not be present in a circus themed game and just left me bewildered and confused, and to top it all off certain aspects of the music are just out of tune entirely. I don’t know what was meant to be going on here, but I sure as hell didn’t like the sound of it.

Now we interrogate the game’s lifespan. If you’re a glutton for punishment, or are obsessed with beating high scores you could certainly do worse. That said, the bland games and pointless multiplayer won’t hold your attention for long otherwise. The game sells for a budget price, but this is really one of those cases where you get what you pay for. Avoid. Avoid Avoid.

Good level of challenge across the board, sixteen mini-games that are quite varied, Decent graphics

Final Verdict:
POOR
Mixing an arbitrary Playmobil license with generic circus themed mini-games, Playmobil: Circus offers some challenging moments that are made entirely unenjoyable by generic games and unresponsive controls
A copy of this game was provided by Developer/Publisher/Distributor/PR Agency for review purposes. Click here to know more about our Reviews Policy.