I’m generally not a superstitious individual, but as of late I’ve started questioning my fortune. Indeed it seems my luck is waning as of late, as I’m tasked with reviewing yet another Playmobil game. I always struggle to know how to approach reviewing a game such as this that is lacking in quality, yet is aimed at young children. Should I try to review it from the perspective of a 5 year old? Would that even work? I keep asking these questions until it dawns on me that, even though this is aimed at the wee ones, there are better games out there that the young ones could be playing. Forget about Playmobil: Knight, put it away in favour of superior 2D platformers such as Sonic or Mario.

For those who wish to persevere in spite of my warnings, here’s the basic run-down. You play a spotty, ginger, beet farmer (good start…) who, after a dark wizard tries to take over the kingdom, is the only able bodied gent available to save the land. It is thus that he is knighted and sent out on this horribly mediocre 2D adventure. 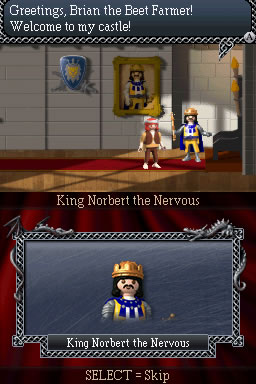 Move over master chief, Brian the beet farmer’s the new hero in town

The game is a very basic side-scroller where you run, jump and hack your way to fame and glory as a knight of the realm. I say run, but in actual fact it’s more like a very sombre plod. Seriously, the movement speed will bore you to tears and brings the whole game down just in how ridiculous it is. You know that feeling when you force yourself out of bed in the morning to face the horrors of humanity and stumble around your house half-naked with a bottle of whiskey in your hand cursing the failings of society? No? Just me? Well just try and imagine it and then you’re half way towards understanding just how slow the game moves.

A nice attempt has been made to add mission structures that deviate from the usual “go to the right of the screen affair,” but these missions seldom offer more variety than a simple A to B journey anyhow. You can earn gold and use it to upgrade your equipment, but it really can take quite a bit of grinding before you get anywhere near the next upgrade. You can also purchase a flying dragon and fly to the other kingdoms in a top-down flight mode, but the pathetic movement speed also plague these sections. 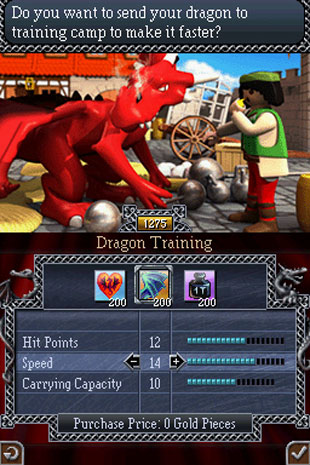 You can train your dragon to move faster, but it still feels to damn slow

For a budget title it must be said the Playmobil: knight is actually quite well presented. The sound is the lesser part of the package and generally comes across as repetitive and uninspired, but the graphics are pretty good on the whole with a reasonable attention to detail. Sadly some colourful backdrops and character sprites are not enough to contend with the appalling animations that drag the visuals down so much. 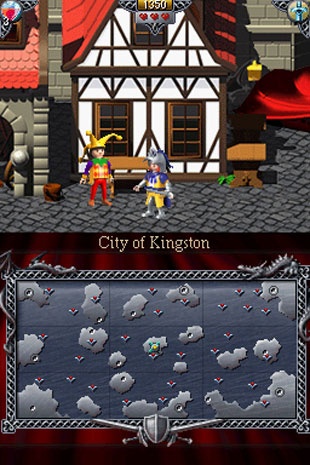 Even as a budget title Playmobil: Knight just won’t last long enough or provide enough enjoyment to justify the price tag. Weighing in at only a handful of hours, the game barely lasts a single sitting. If you are willing to add just a bit more moolah to the pot, you can get a full price title like Mario, Sonic or Pokemon that will provide you with much more entertainment.

The Good: It's not another bloody mini-game compilation, Reasonable visuals for a budget title, Might be fun for the kids

Final Verdict:
BAD
An attempt at a cohesive 2D adventure for kids in a medieval kingdom is let down by extremely slow paced movement and dodgy animations.
A copy of this game was provided by Developer/Publisher/Distributor/PR Agency for review purposes. Click here to know more about our Reviews Policy.