Posted By Kirk Mckeand | On 28th, Oct. 2012 Under Previews | Follow This Author @MckKirk

Life is all about choices. When I got off the tube in the capital, I could have walked left instead of right and I may have never reached my destination. The London locals didn’t want to talk to a foreigner from the Middle East (read East Midlands) and I had to trust my gut. I got lucky. In Haemimont Games new gangster epic you will be faced with a lot of choice, so I will ask you a question, do you feel lucky?

Down a side street was my destination, a detective agency , tucked away to avoid attention from the liquor police, “Tommy ‘Two Gun’ Tucci sent me” I said meekly to the man on the door, “Oh, hi!” he said politely, “we are just setting up if you want to get a coffee”, so I politely accepted and went to go in. The thing is, he meant a coffee in a coffee shop. I felt like a tool.

So after my reasonably priced coffee (I was expecting the price to destroy my soul) I headed back to look at Omerta the period, gangster sim. This time the door was closed, so I used the buzzer. “Who sent you?” said the raspy voice on the other side, “Tommy ‘Two Gun’ Tucci”, I replied. The door unlocked and I made my way down the narrow staircase ahead. At the bottom I was met my a lone man sat at a desk.

He was wearing period clothes and on his desk sat an antique typewriter, not unlike the ones in Resident Evil, and the ashtray on his desk contained the ends of countless used cigars. The room itself was minute and I was starting to doubt myself, then suddenly he stood up and made his way to the large bookcase bulit into the wall. He moved a book and the whole bookcase rotated, revealing a rather expansive bar, and beyond were countless gaming laptops. What an introduction. 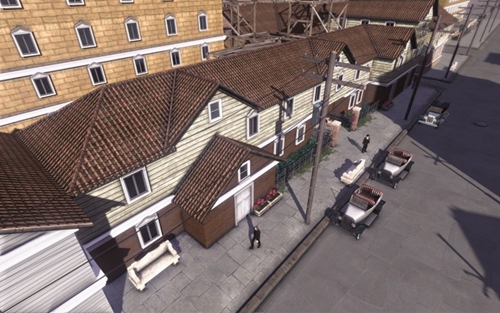 Atlantic City in all its isometric glory.

Omerta is the story of two brothers from Sicily, who moved to Atlantic City in America during the prohibition in the1920’s. One brother sees the prohibition as a chance to make himself a better life and the other chooses to enforce the law. You will never guess which brother you play as. The word Omerta is a code of honour, preventing people from within criminal syndicates divulging trade secrets. Gangsters don’t take well to snitches.

The game is a mix between Sim City and XCOM, but in a universe similar to the one seen in tv series Boardwalk Empire, which is no bad thing. From what I saw, it lacks the depth of either of the aforementioned games, but that is to expected as they are much more focused affairs. That is not to say the game isn’t deep though. At the heart of the game you are building up an empire, you can play the build section of the game relatively cleanly: bribing officials, trading, building alliances with rival gangs, building legitimate businesses. Or the opposite: killing officials, stealing everything, killing rivals, building illegal distilleries.

For any action to be completed, you must either go personally or send one of your hired goons to do the dirty work, and when you are all assigned tasks there is nothing to do but sit and wait. Hopefully they add the ability to speed up time for the finished build of the game, although this may be alleviated slightly when you have a bigger mob later in the game as I only played an early section. In the story mode you get a set of objectives to complete, one of the first is to build up a set amount of money by stealing/trading, but every now and then a random event will occur and battle will commence.

The camera zooms in for the combat, which is turn based. Your avatar and mobsters all have character specific skills, and as is the trend these days you can also assign perks which improve your proficiency with a desired weapon, amongst other things. Weapons also have unique skills: a shotgun gives you a cone target which can injure multiple enemies, a Tommy-gun is spray-and-pray and damages the enemies morale, pistols fire more in a turn and can target a specific area, and double revolvers let you fire first if attacked.

The turns are based on character statistics, so you don’t take it in turns by team, and a character won’t necessarily get only one turn per round. This leads to frantic prioritising of targets, trying to end them before they get their turn. You can use cover to your advantage, but unfortunately the combat zones seem pretty flat, and don’t seem to take advantage of verticality.

The combat is probably the highlight from what I saw, the only downside is that there are no rogue-like elements, like perma-death. If your characters die in battle, you currently just have to wait in the build mode until they are fit for duty again. One nice touch though is if your characters are arrested you have a few choices: you can be boring and bribe police, you can wait, or you can launch a full-scale assault against the station to destroy evidence. I choose option three.

There are some nice little aesthetic touches in the game, people getting out their umbrellas in the rain, the city itself featuring known landmarks from the time. Graphically the game is pretty simplistic, which suits the game really as the user interface is kept free from clutter, some dynamic camera angles in the battles would have helped with immersion though. 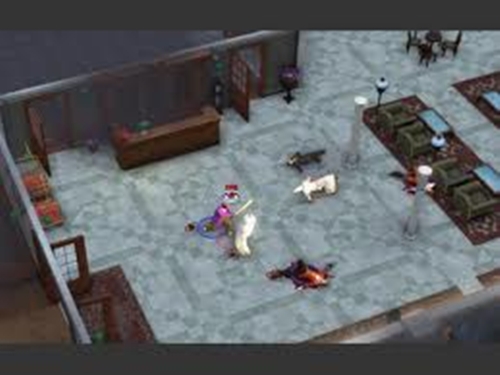 You can hit people with bats to inflict concussion, which affects the amount of action they can take.

Unfortunately I didn’t get to try out the two online modes, as they sound pretty promising. You can take your mob from the main game and pit them against your friends, or strangers, and keep the spoils of victory. You can also team up with your friends in some of the co-operative modes. These, along with the sandbox option, should provide longevity well after the main campaign is finished.

Haemimont Games sure know how to make a strategy title, they make the brilliant dictator-em-up Tropico series after all. From my time with the game it looks very promising, it’s hard to get the full picture though in a couple of hours, with a game this gargantuan in scale. Any fans of the strategy genre should definitely keep an eye on this. Ever since I remember, I always wanted to be a gangster. Now I can.