A slow, but a superb stealth-driven adventure.

Prey from developer Arkane Studios and publisher Bethesda Softworks, is an audacious, new attempt at a genre over-saturated at this point. In many respects, Arkane accomplished what they’d set out to do in this interesting and often intense first-person, action — mixed with horror and suspense — shooter. You’ll walk in thinking you know where you’re headed, but the plot twists, creepy corridors, and countless decisions of both good and bad, will send you into a tailspin of endless possibilities.

As you awake on the space station Talos I, your first decision of the game begins with choosing which gender your character, Morgan Yu, will be — this will branch out into a world of decision making that will determine Yu’s progress and fate throughout the entirety of the experience. As Yu awakes, there’s an ambiance of hazy and blurry pieces that seemed to be skewed and misplaced, and a sense that not everything is as it seems. After a purposely slow start, Yu is pushed into the overbearing environment of Talos I’s endlessly thrashed corridors, towering lobbies, packed offices and massive rooms destroyed… by something; Yu finds out that the Talos I space station has been taken over by an alien species called Typhon. Yu quickly realizes that it’s up to him/her to prevent the Typhon species from getting off of Talos I.

Like most games under the Bethesda’s branding, Prey has a fully-realized environment with a slew of gadgets and gizmos to pick up and collect, characters with fully fleshed out backgrounds, a unique and interactive story with plenty of exploration, and fantastic voice acting. There’s also some similar but interesting takes: such as a Resident Evil-style inventory system, and a Dead Space style of suspense to keep your eyes wide open the entire trip.

"The game encourages you to sneak and hide from enemies rather than taking them all on at once."

Prey‘s aggressive alien lifeforms, the Typhon’s, are as terrifying as they come — and they come in multiple forms. The smallest life form know as a mimic, is a quadrupedal black mass that looks like something you’d scribble on your notebook while taking notes in school. Its slithering, stout legs randomly sway in any direction trying to escape and hide. As they scurry off around a corner, the mimics transform into common objects you’ll often not realize and try to pick up, and that’s how it lures you into its attack. Mimics are just one of several variants that linger within Talos I, many of which appear with similar characteristics as that of the mimics. As the environments change, so do enemy types and their aggression to wanting to hunt down and eat Yu alive. I found myself jumping from time to time just trying to stay away from the vile beasts. Hiding around a corner, barely out of site was nerve racking, but so exhilarating.

Yu can be equipped with a limited amount of weapons and gadgets that will allow the character to fend off enemy attacks. This is where a lot of other features will start to look familiar to veteran Bioshock and Resident Evil gamers. Yu starts off with a wrench as the game’s base weapon. Its minimum swing distance and damage really persuade you in to find a new, better weapon quickly this way. But don’t get rid of that wrench — store it. Wrenches are great for restoring junctions and other utility points that help Yu along the way. As you explore the interesting terrain and fancy interior of Talos I, you’ll eventually come across a plethora of better, albeit limited-ammo weapons. For instance, the GLOO gun shoots out a blob of freezing material that instantly hardens on the enemy allowing you to swoop in and attack with your wrench, or pistol. Each weapon felt balanced, but every weapon feels like a peashooter. That’s not necessarily a bad thing since the game encourages you to never fully rely on your weapons.

Always remember that this is not a game entirely based on action elements. You’ll want to spend your time sneaking around as much as possible. Even with some of Prey‘s better weapons, the enemies will remain tough to kill. Their intelligence is based off of their visual scope. If they can see you they will come after you — it’s as simple as that with the Typhons. With such limited resources, it’s important to always stay quiet and use stealth instead.

The game encourages you to sneak and hide from enemies rather than taking them all on at once. With limited ammo and aggressive enemies, death will come a lot faster than you’d anticipate. Weapons are stored in a Favorites Wheel where you can access a number of items quickly, and also in the inventory screen which is set up and designed similarly to that found in Resident Evil — where weapons take blocks and you’re granted a specific number of blocks you can fill up in numerous ways. 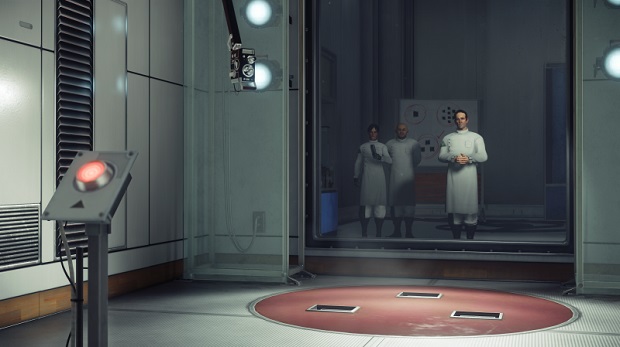 "Prey encompasses an expandable story that branches out from choices the player makes."

As previously stated, sneaking past enemies is a legitimate way of getting through corridors lined with tough enemies. By allowing the player to get from ‘Point A’ to ‘Point B’ in a slew of different ways gives Prey a unique edge compared to other similar games. Many times, doors are locked and the only way to bypass the lock is with a keycard. You can either search the surrounding areas for the keycard, hack computer terminals to open locks or you can find an alternate path. Alternate paths are often hidden or buried behind debris that can be moved if you have the right ability. And finding these paths was half the fun for me. I love searching out every nook and cranny and discovering as much as I can.

Much like many other Arkane/Bethesda games, Prey encompasses an expandable story that branches out from choices the player makes. There are clearing good and bad choices that can change how the story progresses, but it’s interesting to see where the story goes when the choices aren’t so day and night, but rest in a more gray area. These choices can either help Yu advance easier or make the adventure a little harder. We tried to be as good as possible when playing through the story, but sometimes we may have slipped up and allowed a character to die on a few different occasions.

Modifications are an important role in Yu’s life and they play a huge role in how Yu goes about tackling each obstacle. The important thing to remember about Prey is that you aren’t a battle-hardened vet who’s a one-man army. Yu is nothing more than a scientist who uses wit get through Talos I. So naturally mods help increase Yu from a scientist to a more Typhon-minded hybrid, gaining some of their abilities later on. Modifications come slowly and earning points to gain those mods are not just handed out easily. Accomplishing your goals will often give you points to power up Yu, but many early hours will be spent on simple mods, such as increased health, or being able to lift heavier objects, or repair mechanisms. As this is a more stealth-based adventure, earning better mods will take a lot more time. I felt as though the mods just came a bit too slow for a game of this size, but ultimately I earned everything I wanted by the end.

"Prey will suck you right in with its stealth-driven adventure."

Prey is a game best described through its music. With a unique blend of 80’s techno and screeching intensity mixed in, the music will determine your level of fear. The darker, open locations where you aren’t quite sure what will happen next, the drumming music will never let up; forcing your eyes to remain wide open — hoping you’ll be prepared for what jumps out from around a corner, or which pieces of debri will transform into a Typhon. But you’ll never be prepared enough. I surely wasn’t, and that’s what made a lot of those musical moments so important to me.

Prey encourages the player to explore and take as many routes to each destination as possible, which further adds to the replay factor. With the unique blend of a Bioshock environment, Dead Space suspense, Resident Evil-style inventory mechanics, Deus Ex style augmentation system and a ton of its own originality, Prey will suck you right in with its stealth-driven adventure.

Intuitive level design allow you to take many alternate paths to get to your destination. Music is satisfying and always keeps the player on edge. Weapons and abilities are fun even if they are slow to acquire. The environment is beautiful to explore. A great and intriguing story.

The game pretends to be more open to design but nearly forces the player to be stealthy. New abilities get unlocked painfully slow during the first several hours of the experience.

Final Verdict:
AMAZING
Prey can be best described as the ultimate hybrid of Resident Evil, Deus Ex, Bioshock and Dead Space, along with its own set of original features that sets it apart from other games.
A copy of this game was provided by Developer/Publisher/Distributor/PR Agency for review purposes. Click here to know more about our Reviews Policy.