Humans fight dinosaurs, much in the way Jurassic Park intended.

Primal Carnage is the latest release to Steam by Lukewarm Media. This team based player versus player pits teams of mercenaries against dinosaurs. Think of it as Team Fortress 2 meets Jurassic Park. Both teams have five classes to choose from. As Humans, you can be the Commando, Path Finder, Pyro, Scientist or Trapper. All classes have special secondary weapons. For example, the Path Finder can throw an ultra bright flare that can blind dinosaurs. 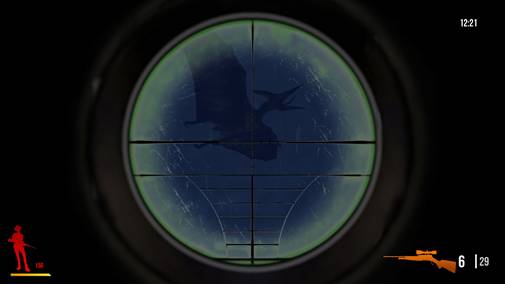 On the dino side your classes are broken down to Pteranodo, Novaraptor, Dilophosaurus, T-Rex, and Carnataurus. I’m not into dinosaurs so I’m going to assume those names aren’t made up. The Dilo is a very small dino that can spit purple goop at humans and the first time I thought my video card crashed on me. It was pretty messy and you can’t see for a few seconds. The Pteranodo is very effective in the sky, if you can master the flying, and can swoop down and snatch up humans. The raptor is the most balanced and strongest. Their secondary attack allows them to leap a great distance to land on a human to tear them to shreds. The T-Rex is big and can just eat people. The Carnataurus is humongous and you really should get extra points for taking one down all by yourself, they are just massive.

As mentioned the game play is just PVP. The environments are lush with heavy brush and vegetation. This works to the favor of both sides. Being much smaller, humans can easily hide in the brushes. This also means the visibility is extremely low for humans too. As dinosaurs you can hide in the bigger brush, and use it to move around faster without being seen. Your team is highlighted so you can keep tabs on everyone close to coordinate attacks. It’s also good to stick together as humans cause in the cases where a raptor pins you down, or a Pteranodo snaps you up into the sky, you are completely incapacitated and must rely on someone else to shoot the dino to free you. 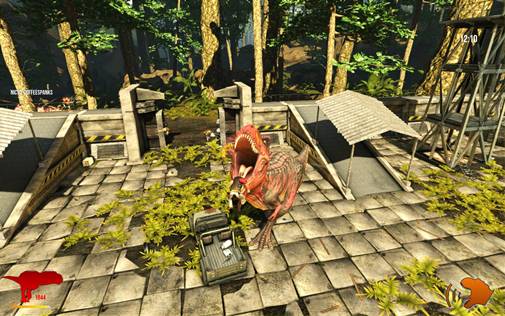 There’s also team chat but I highly suggest you keep the chat minimal. As a human I ran across two dino’s actually talking to each other on a bridge. They learned their lesson quickly with a double kill and why not to talk about how cool the bridge was and how to get to it.

In early review testing I had a hard time finding anyone online, and for the most part didn’t find anything worth noting except that the environments looks pretty good. After some time though I came across some full servers and the games really came to life. With full teams of dinosaurs rampaging through human nests, it stays chaotic throughout and gives you the feeling of a balanced game. Although the dinos should have the advantage due to speed and size, I found many humans to hold their own and gain victory in their rounds. That’s not to say the humans are going to win every time. If your Pternanodo are skilled they can scoop up people and either drop them to their death, or in my case, they dropped me on the top of scaffolding. There was no easy way down, and although I spent time looking for a way down, in the end I wasted time and fell to my death, which shaved off time from winning. 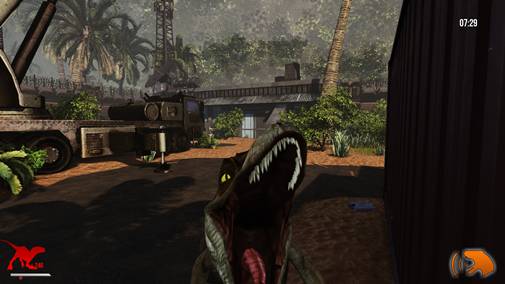 Although game play was solid, at times it felt like I was fighting the heavy brush just to get a glimpse of a dinosaur. In the jungle areas it made more sense, but in cargo freight shipping yards, it seemed fairly obvious that the brush was there only to obscure your view.

Once the servers get full, Primal Carnage can be an exciting game to play. It’s almost like being in the middle of the Jurassic Park movie, however in here, it’s okay that there isn’t a real plot. In the end the game is really just Team Fortress 2 meets Jurassic Park. This could be a good thing for people who pretend the movie had a plot, and are a little tired of Team Fortress 2 and need something new in their team death matches. However if you aren’t into dinosaurs, think Jurassic Park was completely stupid, even though the effects were amazing, and you just played another free round of Team Fortress 2, you could easily skip this game and not even feel like there’s a plot hole in your life. Really, they spent the entire movie getting the power back on, just to leave in a gas powered helicopter.

Final Verdict:
GOOD
It’s an all out war in Primal Carnage. Humans fight dinosaurs, much in the way Jurassic Park intended.
A copy of this game was provided by Developer/Publisher/Distributor/PR Agency for review purposes. Click here to know more about our Reviews Policy.