Posted By Rashid Sayed | On 17th, Sep. 2009 Under Reviews | Follow This Author @GamingBoltTweet

The original Prince of Persia came out in 1989 from Jordan Mechner. Fourteen years later in 2003, Ubisoft picked up the rights and revitalized the franchise with a trilogy of new games: Prince of Persia: The Sands of Time, Prince of Persia: Warrior Within, and Prince of Persia: The Two Thrones. All of them were a critical and financial success. That leads us to right now where Ubisoft has restarted the franchise once again with a new prince, a new story, and a new world in the aptly titled Prince of Persia. The first thing most people will notice about the new Prince of Persia is its unique art style. Ubisoft brillantly uses cel-shaded graphics to really make the game visuals stand-out. Each environment is beautifully rendered in their corruption stage and their eventual cleansed stage. The enemies are dark and sinister and look unique to other villains. The Prince (even though he is not much of one) along with his companion Elika are both cel-shaded as well and look fantastic. The visuals, while not always technically sound (there are some framerate issues), never fail to be absolutely beautiful.

Prince of Persia has always been all about platforming from one place to another and not as much about combat. That has changed since the original. In Prince of Persia: The Sands of Time back from 2003, the game was all about platforming and not so much about the combat. Warrior Within changed that, but the combat in the newest installment of the series feels more satisfying. Instead of having a bunch of grunt enemies attack you, all of the battles are one-on-one which gives it a more cincematic feel for each battle. However you won’t be alone. Elika will always be there to help and along with the Prince can pull off some pretty awesome-looking combos. 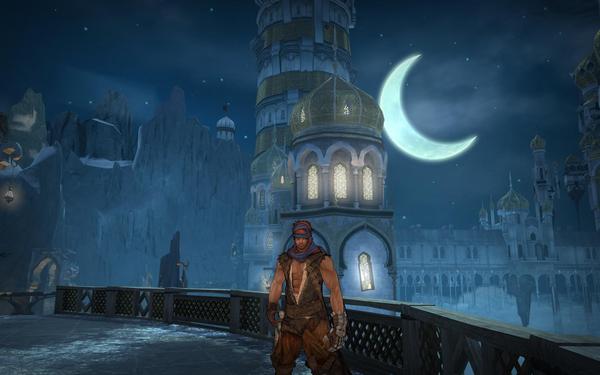 This game has a stunning artstyle.

The controls are the same whether you are in combat or not. There is a button to use the Prince’s gauntlet, a button for his sword, a button for acrobatics and platforming, and a button to use Elika. Over the course of the game, the Prince does not gain new powers or weapons. On the other hand Elika gains new powers which open up new areas of the game for you to cleanse. The controls have been changed from the Sands trilogy and will take some getting used to if you are a veteran of the series. However they do work very well. One thing that might turn some people off is that this game is very forgiving. If you don’t know whether you need to double-jump over a gap, the color fades from the screen to let you know that you need to. Anytime you need to counter an enemy attack, a button prompt will appear on screen. Also you cannot die in the game. Whether an enemy is about to kill you or you mistime a jump, Elika will always save you. It is unfortunate that there is no way to turn these options off but the game overcomes the lack of difficulty to still be very rewarding.

The single-player in Prince of Persia starts out with the main charcter, the Prince (who is actually a petty thief), walking through the desert calling for his donkey, Farah. Pretty soon a princess named Elika runs into him and he helps her escape her pursuers. I’ll leave the rest of the story for you but it turns out to be pretty good. The entire game is anywhere from eight to twelve hours depending if you try to collect all of the 1001 light seeds (which you will find out about through the course of the story). 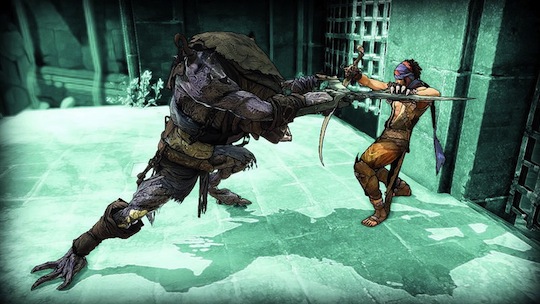 Combat is a one-on-one (two-on-one with Elika) affair this time around.

Soundwise this game is decent but nothing spectacular. All of the music seems like it should be there and it kicks in at the right times. The sound effects are quite a bit bitter whether it be from the corruption around levels to the scraping sound when the Prince drags his gauntlet against a rock. Elika and the Prince’s voice acting performances are definitely the high points of the audio. The Prince is a wisecracking guy who can be kind of rude towards Elika. Elika, on the other hand, is the character you will come to care about throughout the game. She puts up with the Prince and is the one who always saves you from certain death. Even with all that, it is Elika’s voice acting that is one of the best voice acting performances of the year.

As I’ve said already, the single-player takes anywhere from eight to twelve hours to complete. There is some replay value with bonus costumes you can wear as the Prince but there is not too much incentive. Also there is no multiplayer in the game which takes away from the replay value as well.

As a whole, Prince of Persia is a great game that platform fans should not shy away from. The art style is fantastic, voice acting is great and the gameplay is solid. Yes it may be easier than it should and there isn’t much replay value but the overall experience is worth it and is a welcome addition to the venerable Prince of Persia franchise.

Soundtrack leaves something to be desired, game can be too easy sometimes, the Prince isn't as good as Princes of old

Prince of Persia is a solid addition to the franchise but being so simplified doesn't always help.

A copy of this game was provided by developer/publisher for review purposes. Click here to know more about our Reviews Policy.
Tagged With: PlayStation 3, POP, Prince of Persia, xbox 360