Who could have ever guessed the recipe for one of Nintendo’s more popular DS titles was a simple puzzle-laden point and click mystery adventure? Sure, the point and click has always been popular with three groups: the very young, the middle aged woman, and the elderly. Somehow, Professor Layton manages to satisfy gamers of all ages without changing much of the original formula. Even more amazing, is the fact that the series has been able to produce four titles (five in Japan) by sticking to its guns, and it’s still a hit with a movie already out, two more coming down the pipeline, and yet more games coming out in the near future including a cross over with another popular investigative-point-and-click-game-gone-movie Phoenix Wright! Wow, what a resume!

Since the release of The Curious Village back in 2008, many of my friends instantly became charmed by the series and urged me to play, but for whatever reason I resisted the Layton-mania that swept over my group of friends. When I had the opportunity to review this game, I was initially intrigued, but became sold once I found out that The Last Specter was actually a prequel! This meant I had a second chance to enjoy the series without feeling like I was missing something or had a lot of catching up to do. Thankfully, I also took the opportunity to at least pay attention to the series the first time around, so I went into this review with at least a sense of the game’s roots.

The Last Specter takes place three years before the events of the first game, and features the main characters Professor Layton and his assistant Luke as well as a new character, Emmy. The story itself goes into how the professor met Luke, and the first mystery they solved together in the town of Misthallery. One of the things I did notice about the story in general is that it isn’t as big and important as other games such as Phoenix Wright. That’s not to say it isn’t present, rather than act as the canvas that the rest of the game is painted upon, the story takes the role of a sort of glue, binding the components together and giving it direction. In this way, it isn’t intrusive for those who play the game solely for its puzzles, and at the same time has received enough attention that those of us along for the narrative feel satisfied. The animated and fully voiced cutscenes are expertly done, helping to set this game apart from its competition while simultaneously opening the door to an audience that normally doesn’t play games. 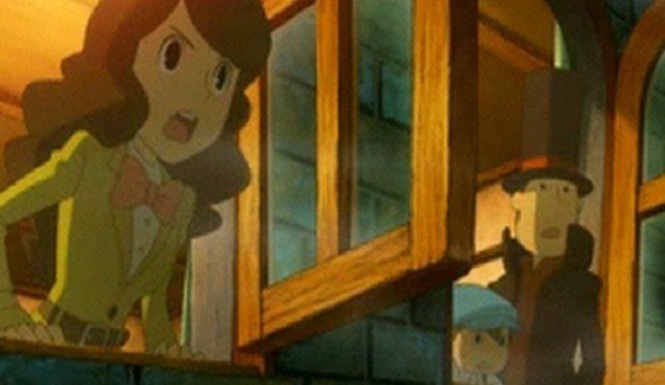 The cutscenes are of surprisingly high quality for the Nintendo DS.

Gameplay wise, the game is extremely simple. You navigate through the town of Misthallery one screen at a time clicking on objects or people of interest trying to find hint coins, puzzles, or advancement in the story. You solve puzzles, advance the plot, rinse, and continue until you reach the end of the game. With an equation like that, it’s painfully obvious that puzzles are the real meat of this game, and the developers took no steps to hide this fact with each and every citizen carrying an obsession with puzzles that borders on disturbing. While this could be accepted in The Curious Village with the way the narrative was written, at this point in the series you wish video games were invented in this fictional England so you can shove a DS in the hands of all these citizens and give them something else to do rather than dream up nonsensical puzzles they feel compelled to share with the good professor. Of course, then there wouldn’t be a game, so I guess we have to deal with the cards we have been dealt.

As far as the puzzles go, in general, they are well thought out and designed. There is a great variety to the types of puzzles you encounter, and there certainly is variance in the puzzle difficulty with some puzzles being mind numbingly easy and others may cause you to stare at your DS for close to an hour as you try to find the solution without using any hint coins. As I mentioned earlier, hint coins are spread throughout the city of Misthallery. Their use is simple: each hint coin is good for one hint on a puzzle, each puzzle having four separate hints. The usefulness of the hints varies from puzzle to puzzle and are usually obvious facets of the problem you have likely long realized. Occasionally, you will be given a hint that really shines a new light on how you tackle a problem, and even if only for that, they are useful. They are in limited supply, so I would recommend against using them indiscriminately.

The puzzles are not without their flaws, and I would say there are three things that while not a deal breaker, are mildly frustrating. Firstly, even with my limited time playing and watching The Curious Village, I noticed that there is some overlap with puzzles between the two games. The puzzles in The Last Specter may be slightly different, but can still be solved in much the same way as its predecessors. I can forgive the developers this though, as I imagine it must be difficult to come up with nearly 200 new puzzles every year, and some overlap must be done out of practicality. At least they are trying to make it different, which is more than can be said of other developers in a similar situation. Second, some of the puzzles wording or rules are a little vague, which leads to a double puzzle of trying to figure out how the game wants you to solve the puzzle, before you even get into the act of solving the puzzle proper. Finally, there is a score system in place that grades you on how well you solved the puzzle taking into account hints, and wrong guesses. These points that you earn from the puzzles are used to unlock bonuses meaning there certainly is incentive for getting things right. Unfortunately, there is nothing stopping me from solving the puzzle, hitting reset, reloading my data, and getting it right for full points. I suppose the option is better than forcing an auto-save feature or the dreaded Mr. Resetti from Animal Crossing. 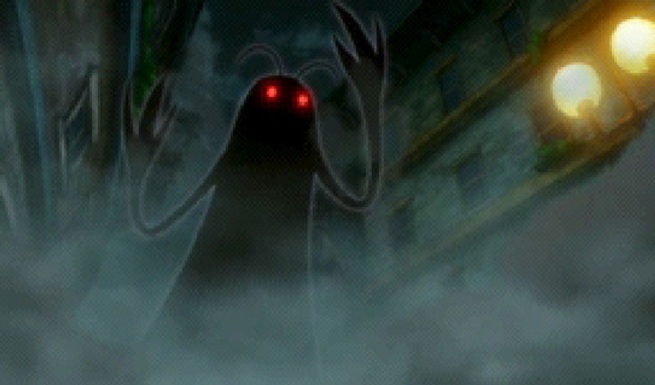 In the newest title, you will be trying to solve the mystery of a specter destroying the town of Misthallery.

Mr. Resetti may have been left out of The Last Specter but that did not prevent the team from taking some inspiration from Animal Crossing with their bonus RPG included on the cartridge. London Life is supposedly a Layton-esque RPG with over 100 hours of gameplay. The first thing I thought when I read that was “Oh! Final Fantasy!” conversely, the first thing I thought when I played it was “Oh… Animal Crossing.” Essentially, you get to run around doing errands for characters from the Layton series, increasing people’s happiness and getting spiffy new outfits for your custom made character. Really, while it’s not bad, it’s not a real selling point to the game either. Sure it’ll give the game a little bit more of a lifespan in your DS, but that’s all. Considering it’s tacked on for free, and did not take anything away from the main game itself, I can’t really complain. If anything, in a world of shady DLC practices, I’m impressed that they would develop something that could have been its own mobile title priced at $4.99 and include it onto their game for free. Even though I did not enjoy it personally, if there is even one person out there that does, it did nothing but help their title, and for that I can at least give Level-5 a nod.

All in all, much of the same that you Layton fans are used to. The game did not stray from its roots playing it safe, but is still enough to satisfy fans. If you’ve been intrigued about the series as I have, I encourage you to jump in with this title. Its ease of accessibility makes it an excellent time burner on the train, or where ever else you find stray, unused minutes of your day to day life. If you didn’t like the series, well, sorry to say but nothing changed in this title that will have you clamoring to give it a go; that is unless you are obsessed with Animal Crossing or fetch quests, desire a setting similar to old London, and don’t mind spending $35 to play a cheaper version. In that case, knock yourself out you weirdo.

Puzzles are varied and have varying levels of difficulties for all puzzle enthusiasts. Includes an entire miniature bonus game.

Without much new innovation in the series, the latest title offers nothing to non-fans of the series save an excuse for those already interested to jump in.

Final Verdict:
EDITOR’S CHOICE
Professor Layton is back in an all new prequel. With even more puzzles than before, the game continues its tradition with great brain teasers presented with a compelling narrative.
A copy of this game was provided by Developer/Publisher/Distributor/PR Agency for review purposes. Click here to know more about our Reviews Policy.