This action game has certainly made a strong first impression.

With the onslaught of upcoming action games on last-gen and current-gen hardware as well as PC, you can’t be blamed for missing a few things in the fog of it all. It’s this period of a video game generations life cycle where a lot of old and new developers are going out of their way to show off what they can do with the new capabilities of the new hardware. and it appears that the Chinese video game studio Digital Sky is no different. Their upcoming game: Project DT is certainly looking like something worth keeping an eye on, as it mixes an interesting dark futuristic yet industrial aesthetic with some incredibly frantic beat-em-up action that’s just as dazzling to the eye as the apparent protagonist. The only trailer that’s been released doesn’t really tell us much about this protagonist, but we can clearly gleam that she is obviously a badass with rocket-powered fists and legs and more than enough fighting acumen to take on bizarre biomechanical machines three times her size.

We haven’t seen much of the game yet obviously there’s only been one official trailer released, but we do see some pretty frantic action that might remind one of the hand-to-hand combat from Fist of the North Star turned up to 11. It almost has a little bit of a metal gear solid vibe to it as well, which becomes especially apparent when our hero fights what appears to be a modified Metal Gear Ray and proceeds to beat the ever-living crap out of it. Foxhound should really get a hold of this girl. The combat consists of what appears to be a wide range of combos with both punching and kicking and not really any use of external weapons. No swords, no guns, no projectiles of any sort, just her fists and feet. Some punches and kicks look like they are just done by her, but other ones seem to be enhanced by various little rockets all over her body giving them more power and seemingly doing more damage.

Whether this is something that just happens in the course of regular combos or if it’s some sort of enhanced mode of fighting that you manually trigger and is tied to some sort of fuel is anybody’s guess but I’m glad it’s a part of the combat either way. There also seems to be a lot of options for when the protagonist is in the air. Beating up enemies in the air and dive kicking them back down to the ground looks like it’s satisfying to pull off and could introduce a lot of variety into the moment-to-moment combat of the game. The enemies seem to have a good amount of variety to their combat as well. While it’s definitely not looking like some sort of challenging Souls like game, I am curious as to how much challenge these guys will put up. They definitely look like they’re meant to be taken seriously and aren’t just fodder for you to warm up on.

The boss fight at the end of the trailer is elaborated on a little bit in another gameplay demonstration video that can be found although it’s a little harder to find than the trailer. Its moveset is pretty diverse, with close quarters stomping and swinging of its feet to mid-range barrages of missiles to long-range massive laser beams that might remind one of a boss from Vanquish or Nier Automata. If this boss has any indication of the types of enemies we can expect to fight in Project DT, then I think fans of action games like this have every reason to be extremely excited for whatever this game turns out to be.

We can also see that there is a combo reward system that’s giving the player letter grades on various moves and chains of attacks. You can also see the HUD a little bit in this gameplay demonstration video. you see the main character’s life bar the boss’s life bar as well as some yellow notches below her life bar that might indicate some sort of ammo or limited-use attack, but unfortunately throughout the video whatever that is is never used so we’ll have to wait and see what exactly those are meant to indicate. We also do see what sort of looks like a selected weapon or style in the upper left corner. With her arm currently selected and something else behind it that is available but not selected at the time. So maybe there are alternate weapons in this game after all but they just don’t want to show them to us yet which is totally understandable. 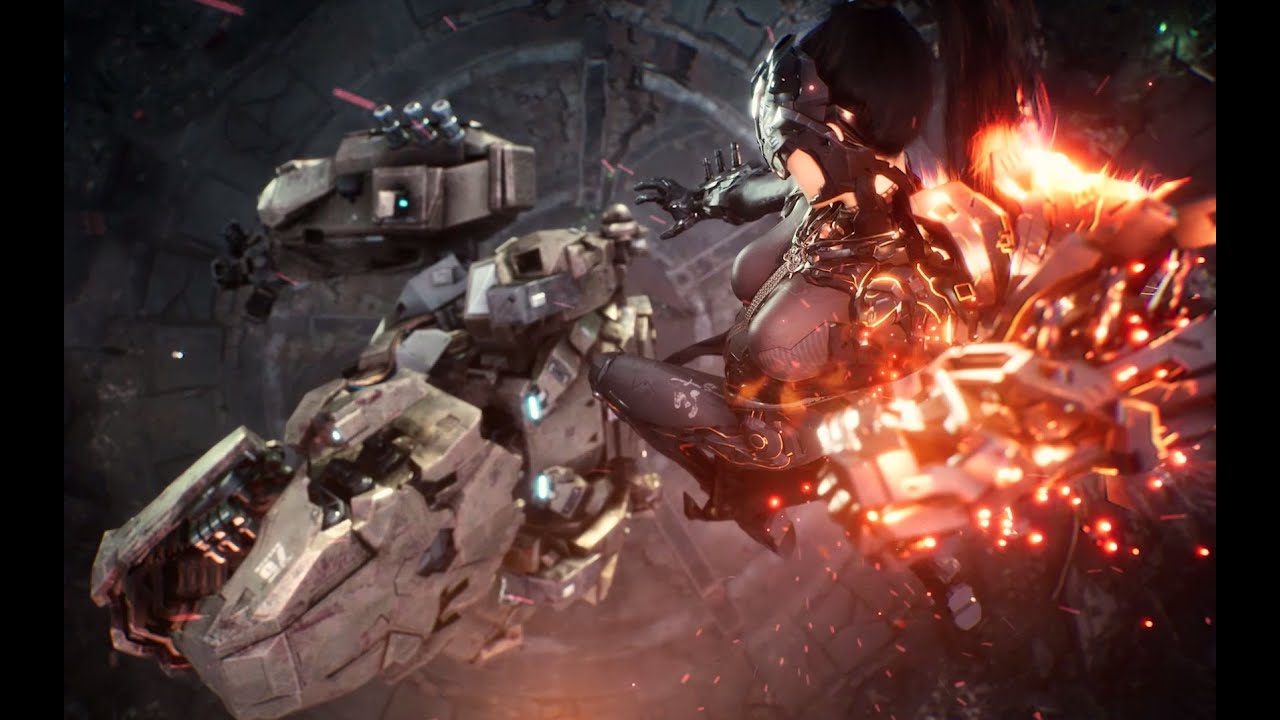 Aside from the combat it looks like this game has a fair amount of world building and atmosphere going for it. Lots of dark shards of smooth rock in the background and flags from some sort of civilization that may have gone awry. It almost doesn’t even look like it’s on Earth, or if it is, it’s probably so distant into the future that it may as well not be. The busted-up robots among the foliage at the beginning of the trailer do seem to suggest that this is a war-torn region. So whether that’s a war between two factions and our hero is looking to stop it or if she’s on one of the sides will have to wait and see but there’s definitely some sort of major conflict going on here and it’s not just an isolated story of her character doing something outside of the context of the society which she’s from.

Whatever this game ends up being it’s pretty clear that it’s going to have a heavy focus on fast stylish action and a lot of visual eye candy. This is something that we should really be expecting of any major action game at this point, but Project DT also seems to want to put its own spin on things with a darker, more somber dystopian setting, and a focus on hand-to-hand combat as opposed to the hacking and slashing that we see in most other action games of this type. Although hopefully the main character’s moveset does end up being expanded by alternate combat styles or maybe different weapons, what we’ve been shown so far does seem to indicate that the developer behind-the-wheel knows exactly what they’re doing and is well on their way to making a really fun action game. Whether this character can end up standing among the greats like 2B remains to be seen. But given everything that we’ve seen so far that does appear to be the aim, and I think we have every reason to be cautiously optimistic.