Forgive the fact that its name is an oxymoron, or that ultimately Prototype 2 is more of the same albeit with slightly glossier graphics and a new protagonist, and I’ll wager that you’ll really enjoy this latest outing.

Leaping buildings in a single bound, sprinting up walls and swallowing people whole soon becomes second nature in this uber violent, parkour-loving superhero sequel. And, compared to the first game, it’s better in pretty much every department. 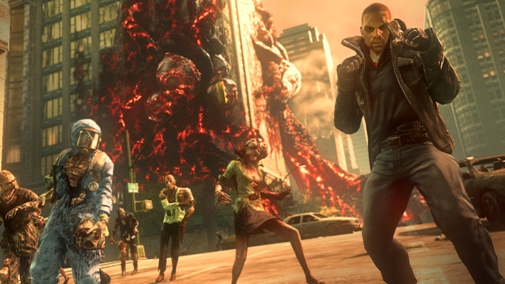 The follow-up to Radical Entertainment’s 2009 open world epic is bigger, badder and better looking than before, this time putting you in the shoes of war veteran Sergeant James Heller.  Taking place 14-months after the events of the original, he returns home from war to find the plague that blighted New York City is rife, and his wife and child have been murdered. Heller decides to take matters into his own hands and track down Alex Mercer, the anti-hero from the first game, who he thinks is responsible. Trouble is, when he confronts the shape-shifting menace, Mercer infects the good Sergeant and gives him equally awe-inspiring powers.

So it’s up to you to negotiate the disease-riddled streets to uncover the truth about the latest outbreak and track down those no good Gentek scientists who are behind the virus. Heller is consumed by thoughts of revenge – not a nice way to be but better than those poor passersby who are all too often consumed by Heller. 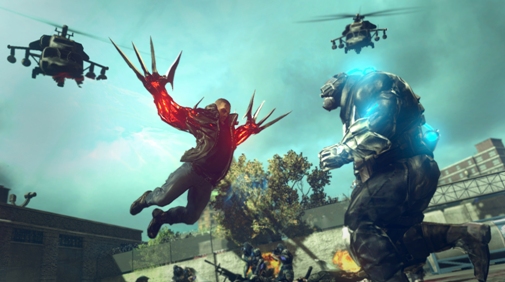 Flying through the air with the greatest of ease

The city is split into three distinct zones, each affected by the virus to a different extent and boasting varied challenges and opponents. You’ve got to feel for the poor old inhabitants who live in perpetual fear, well aware that  they’re highly likely to be killed by you, the military or the weird beasts that now roam the streets.

The graphics have clearly been enhanced since the last outing and New York certainly looks a little livelier than the previous drab rendition. Heller is a nicely-drawn colourful character and is well animated, while pedestrians and the evil Blackwatch all look the part too. The creatures that you’ll face look suitably gruesome, which adds to the malevolent feel to the game.

A lot of care and attention has been paid to the atmosphere and the environment this time round. There’s a real sense of foreboding and doom amid the military clampdown, the civilians being controlled by a ruthless regime. 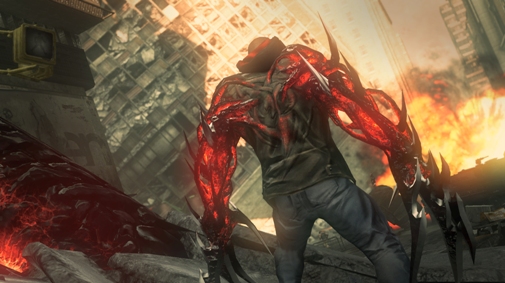 Thing is, for all the positives, Prototype 2 is slightly flawed. Despite all the efforts to ensure the AI runs away when all hell breaks loose, it seem pretty nonchalant when you start to run up sheer walls in front of them or glide just metres above their heads. It’s all a little weird and disrupts the “realism” somewhat. One minute gunfire can erupt and screams ensue… fair enough. The next, you’re running up a 10 storey building before their very eyes, jumping from the summit and plunging hundreds of feet to land safely amongst them, before absorbing one or two to replenish your health… and they don’t even bat an eyelid. Perhaps they’re a little numb by the whole ordeal and it’s just a usual day at the office but I know for damn sure I’d react if a normal-looking guy cut someone in half right in front of me and ran up a wall!

At the start of the game you’re armed with only a few abilities that mean you’re able to consume people, run up walls and air dash short distances. But you’re quickly able to call on a new hunting skill too… a swift click of the thumb stick emits a sonar pulse that sweeps the terrain and returns to you, highlighting the location of your target. It’s a great addition and a much better idea than the usual handholding and signposting that features in most games nowadays.

As you progress through the game, you’ll be awarded new mutations that significantly upgrade your abilities. You can choose new superpowers from a fairly substantial list and tailor your character to your needs. These range from the more mundane, like improving your speed or gliding skills, to taking more damage or being less noticeable to the pesky bio scanners that litter the city. There are also, of course, a plethora of powers that you’ll earn as you complete missions and fight the increasingly tough bad guys. From claws and tendrils to hammerfists and blades, these are brilliant fun and instil a real sense that you’re a powerful killing machine.

The powers are fantastically diverse and well animated – looking great when you’re slicing and dicing your way through a crowd of bad guys, before speeding away from the scene to evade the incoming strike force. Finding collectibles in the form of hidden BlackBoxes and Field Ops teams that are dotted about the map also allow you to boost your skills and increase your repertoire of moves. 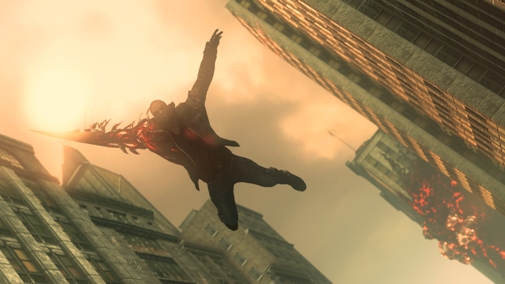 Power up and you’ll have no problems completing the missions

However, as we said above, it’s not without its faults. Besides the slightly weird AI, the missions and plot are much improved on the original but are ultimately run of the mill and quickly feel repetitive. These largely consist of receiving a phone call from an ally or watching a brief cut scene, and then having to get from A to B as quickly as possible. Once there, you typically need to find a commander, head scientist or some Blackwatch bigwig and absorb them to take on their appearance or abilities. It’s usually then a case of using some heavily-guarded hand scanner to gain access to a generic looking laboratory. Kill some more people or creatures and escape when the alarms go off. Job done. It does seem a little formulaic at times. Thing is, it’s all still great fun – especially when you’re powered up and have some blades, claws and tendrils up your sleeves.

Another minor gripe – but quite a common one in games of this type – are the camera angles, which can be somewhat frustrating at times. There’s nothing worse than being in the heat of battle with several hungry-looking creatures bearing down on you, and the camera refusing to give you a decent view.

It’s a decent sized game that will keep you enthralled for a good few hours. Besides the story objectives, there are numerous Blacknet missions to get your claws into as well. These start by accessing terminals dotted about the map and then meeting various objectives. It’s a nice distraction and often a little less linear than the main plot.

There’s plenty to keep you occupied around the streets of New York but even when you’re done with the main campaign, the RADNET retail edition comes crammed with 55 nuggets of additional content. For the seven weeks following its launch, gamers can test their mettle at various challenges, unlock new mutations and powers, and gain access to new avatar items, themes and videos. It’s a good idea and may encourage a few more people to buy the game at launch.

Okay, so Prototype 2 has not revolutionised the series to the extent that Assassin’s Creed 2 did with its predecessor but it does address many of the moans of the original. It’s more fun to play, the environments are more lifelike and fun to traverse and it has a much more likeable protagonist. I found myself caring more about Heller’s missions and his quest for revenge than I ever did with Mercer – although I did find myself clicking through the many cut scenes and ignoring some of the story to get back to the action as quickly as possible. But that’s no bad thing.

This is everything the first game wanted to be – but there is still plenty of scope for the next follow up to be even more spectacular. Not quite a classic but well worth picking up.

It looks better, feels better and the lead character is far more appealing than before. New York is more lifelike in the sequel and the pacing and missions make you want to keep on playing

Take away the new coat of paint and the new protagonist, and it all feels fairly similar to the first game. Quickly gets slightly repetitive and the plot is fairly forgettable

Final Verdict:
SUPERB
There's a new superhuman killing machine in town, with blades for arms and the ability to run up walls. Prototype 2 fixes alot of the gripes from the first game and is great fun from beginning to end. But it does have a few flaws...
A copy of this game was provided by Developer/Publisher/Distributor/PR Agency for review purposes. Click here to know more about our Reviews Policy.