In our latest feature, we take a look at what it would cost to build a PC comparable to that of Sony's latest and greatest PS5.

The next generation of consoles has already dawned upon us, with folks over at Sony and Microsoft having launched the PS5 and Xbox Series X/S respectively. Games like Bluepoint Demon’s Souls remake and Insomniac’s Ratchet and Clank: Rift Apart are great showcases of Sony’s hardware. The Xbox Series X might have a slight edge over Sony’s machine in some facets of hardware, but games like Halo Infinite are yet to showcase the console’s fullest potential.

Consoles have become pretty close to PC in many ways over the years, with PS4 and Xbox One utilizing the same x86 instruction set that most desktop CPUs use – as opposed to the PowerPC and Cell chips found in consoles like the PS3 and Xbox 360 respectively. This has in turn, calls for a number of comparisons to PCs with new consoles often being touted as the most bang for your buck. Of course, owning a gaming PC or a console has its own set of advantages and disadvantages – that’s undebatable.

That being said, it’s always interesting to validate time after time again whether claims of consoles being the ultimate way to play at a budget are indeed true? With this in mind, we try to build a PC using all-new off-the-shelf components that should give performance results as close as possible or even better when compared to Sony’s latest and greatest.

Note: The pricing of hardware is based on what they were during the time of writing of this feature, and may change in the future. Also, we have tried to include components that were close to the PS5’s hardware as it’s not feasible to have a 1:1 component list.

The PS5 uses a custom AMD CPU with 8 cores and 16 threads, running at 3.5 GHz. The CPU upgrade to next-gen consoles has remained underappreciated for some time now, as the jump from what was essentially a mobile-grade Jaguar cores from the PS4 and Xbox One has a substantial impact on performance, which many games are utilizing to push framerates up to 120 fps.

For our PC of choice, we went with the Ryzen 7 3700X. Like Sony’s PS5, Ryzen 7 3700X uses the same Zen 2 CPU architecture and features a total of 8 cores and 16 threads, running at a base clock of 3.6 GHz which can reach speeds of 4.4 GHz during heavy workloads. Furthermore, there’s also overclocking support for enthusiasts, which can push these numbers even higher. We also considered the Ryzen 7 5700G, but went with the 3700X since getting compatible hardware for the latter is quite cheaper than the former. On the topic of price, the Ryzen 7 3700X has an MSRP of $329 and can usually be found at around the same price.

Sony’s PS5 uses a custom RDNA 2 GPU which shares the same die with the CPU. It features a total of 36 CUs at 2.23 GHz to achieve 10 TFLOPs of power. The GPU has proven itself to be incredibly capable, with first-party games like Ratchet and Clank: Rift Apart maintaining rock-solid performance levels all the while filling the screen with a bevy of post-processing effects. For our PC build, we opted for an RTX 3060 which features a total of 3584 Turing architected CUDA cores running at up to 1.8 GHz to achieve a raw grunt of 13 TFLOPs of shader performance, which is 30% higher than the PS5.

The PS5’s custom GPU shares a central pool of 16GB of GDDR6 RAM with the CPU, while the RTX 3060 – obviously enough – has a total of 12 GB of GDDR6 memory to its name alone. Nvidia’s Deep Learning Super Sampling technology – commonly abbreviated as DLSS 2.0 does the RTX 3060 great favors, as it allows games to run at high resolutions with all of the graphical bells and whistles without losing much detail.

The RTX 3060 is available at an MSRP of $329, although you might be hard-pressed to find a card at that seemingly very lucrative price. A multitude of reasons ranging from scalping to global silicon shortage have knocked the prices sky-high, so grabbing one alone might be an exercise in pain for now.

For the motherboard, you are free to choose any supported B450/B550/X570 variant from a number of manufacturers. For the sake of keeping the total price point as low as possible, we went with the ASRock B450M PRO4 which claims to support the Ryzen 3000 series right out of the box without a BIOS update, and comes with most of the basic IO amenities that one requires from a motherboard. It can usually be found for around $70. Of course, there are always higher-priced options that allow for better upgrade paths for the future.

In terms of memory, we went with a TEAMGROUP T-Force Vulcan Z 16GB kit, which features 2 modules of DDR4 RAM running at a frequency of 3200 MHz. A Ryzen CPU requires high-speed memory to perform its best, and 3200 MHz is a fine balance of price and performance for now. Running in dual channel configuration has some marginal benefits over a single channel, which is the reason behind our choice of a 2×8 kit. One could spring for a single channel memory instead, of course. Rest assured, there will be more RAM slots available on the board either way for an easy upgrade option in the future. The T-Force Vulkan Z memory kit retails for around $70 on Amazon, and should be an easy pick.

The PS5 features an 825 GB SSD, which operates on a PCI-e 4.0 interface and boasts speeds up to 8-9 GB/s of compressed data. Both Sony and Microsoft have touted the SSDs to be game-changing, for good reason. These SSDs are tightly coupled with other internal components, which makes them more efficient and gives developers a lot more flexibility in designing engines to make full use of these toolsets. Games made for the PC platform have to account for thousands of hardware configurations, but SSDs aren’t the standard just yet – more so, PCI e 4.0 ones.

Our choice of a Samsung 870 EVO is based on many of these more practical reasons than anything else. It’s affordable, it’s durable, and provides plenty of space to store next-gen games and software. A 1TB Samsung 870 Evo is available at $169 at the time of writing. Those wanting to replace it with a PCI-e 4.0 SSD such as the Samsung 980 Pro will also have to spring up for a higher-end B550 motherboard.

For the power supply, we went with the $100 Corsair CX 750 Watt power supply. This is 80+ Bronze certified, and should provide enough juice to keep all components running at max TDP. Of course, this goes without saying – don’t cheap out on power supply. The last thing a newly built system needs is a motherboard shortage caused by some cheap and unreliable power supply 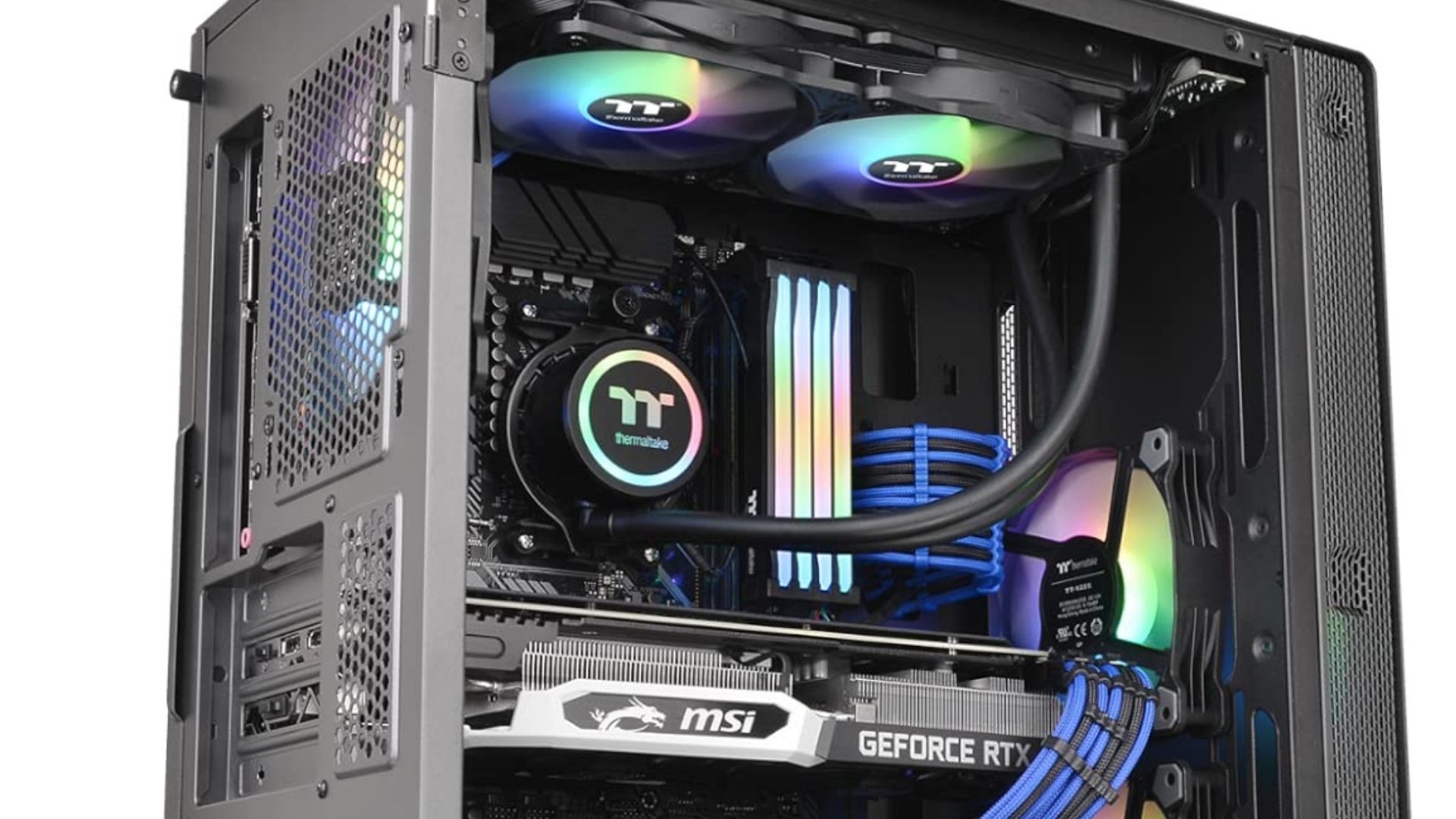 For the cabinet, we went with a Thermaltake S100, which features a tempered glass side panel and a 120mm Rear Fan. It gets the job done, and at a price point of $70 – it’s one of the best out there.

Total Price And What About Blu-Ray Drive, OS, And Peripherals?

The total price for our proposed build comes at around $1137, which is almost 2 times the price of a PS5. A point worth noting here is that we haven’t included a Blu-Ray drive, a fresh copy of Windows 10, and peripherals, and all of this can bump this build’s price to an even higher number. PC gamers mostly download games digitally so a Blu-Ray drive isn’t really required from a gaming perspective. That being said, this configuration should handle almost all of the latest games at a resolution of 4K with respectable settings at comfortable framerates. For games that prove too demanding for the system at the resolution, supported games can utilize DLSS 2.0 to help achieve better performance results. All in all, it’s a lot more flexible and powerful machine than Sony’s offerings – albeit with a hefty price premium attached to it.

Sony uses custom components for its hardware, which is produced at a massive scale which by extension allows it to reach such an enticing price point. Xbox recently revealed that console hardware rarely nets the companies any profits, citing that software royalties and sales contribute to that front instead. Of course, as the generation progresses and newer generations of CPUs and GPUs provide more horsepower for the same price – or hardware, as used in our proposed build, becomes older and by extension cheaper, the gap will narrow down by a great margin as it has always in the past.