Quantum League Interview – Teaming Up With Yourself

Video games – especially those falling in the competitive FPS space – have a tendency to play it safe and follow trend, but that is surely something that cannot be said for Quantum League. Blending time looping mechanics with its unique 1v1 or 2v2 matches, Quantum League looks unique, fast, exciting, and unlike anything else on the market. How well it plays remains to be seen, but things definitely look promising right now. To learn more about this fresh new shooter, we sent across some of our questions about it to its developers at Nimble Giant Entertainment. You can read our conversation with lead game designer Balthazar Auger below. 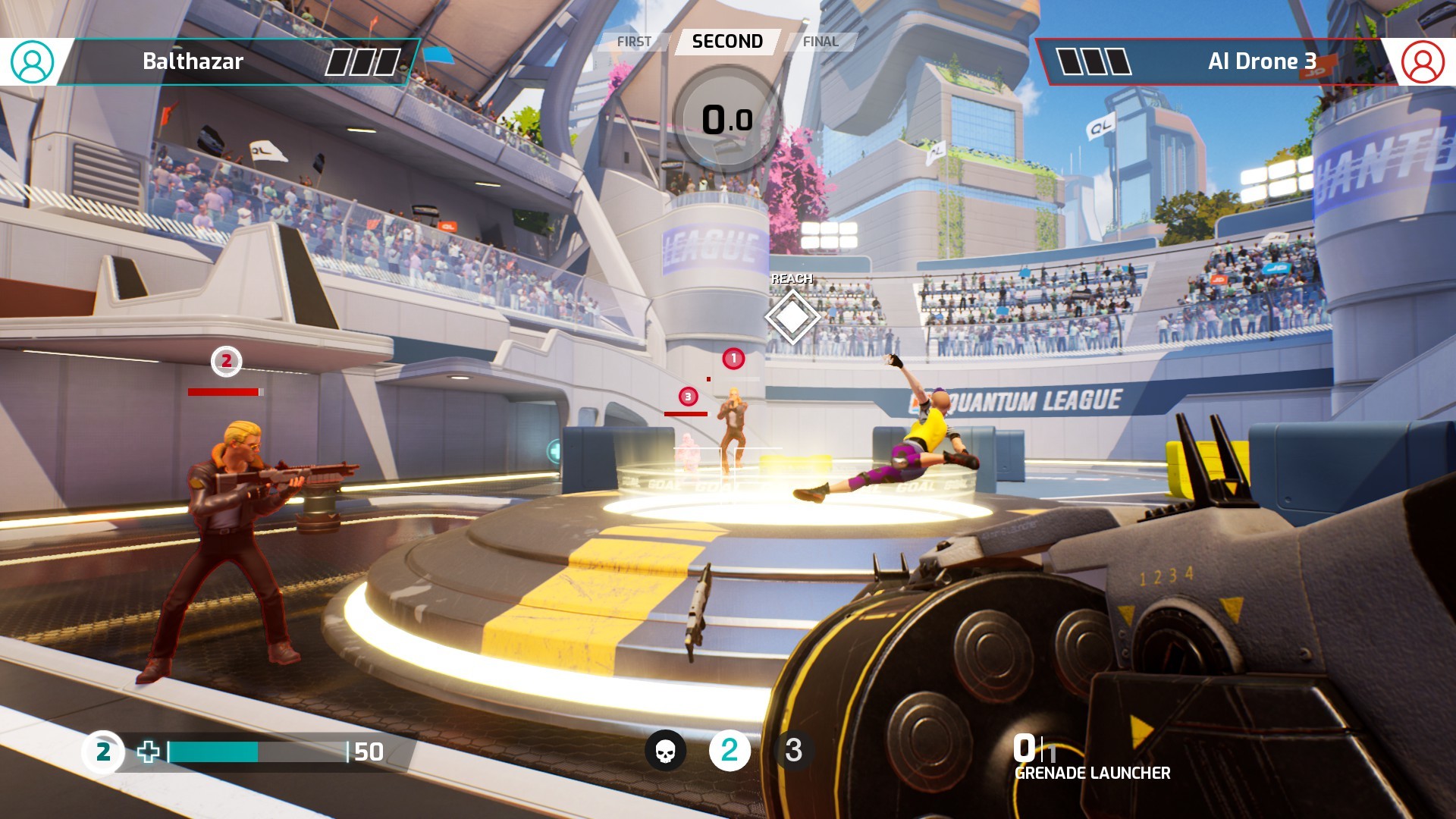 "During a company-wide brainstorming event a lingering idea came up. What would real-time first-person XCOM be like?"

The central premise of Quantum League is a fascinating one, and it’s fair to say that it’s quite unlike anything we’ve seen before in competitive shooters before. How did it come about?

During a company-wide brainstorming event a lingering idea came up. What would real-time first-person XCOM be like? The mechanic was not totally clear, but the idea of being a one-man-squad going back in time again and again to fight another player was there. We decided to assign a very small team to make a prototype. After two weeks we presented a prototype with the base mechanics to the whole company. A two vs two arena, king of the hill, three clone time rewind mechanic, barrels and all. The team played a match. It started slow, people trying to figure out what was going on. By the second loop people were on the edge of their seats. On the final last second point people jumped and cheered. We knew we had something.

How challenging was it to take this crazy idea and ensure that it then works as an actual game?

It has been a very interesting challenge, to say the least! The core problem when embarking on such a journey is that you have no fixed frame of reference, and kind of have to come up with unique solutions to “solved” problems of FPS design, like death mechanics, game modes, HUD design… We felt it was important to really consider each design problem as it presented itself to us in a fresh way, in order to let us find the best possible solution and avoid falling into a “default” decision which would have brought more compromise down the road.

Though the beginning of the decade saw the competitive shooter market beginning to settle into a comfortable rhythm, the last few years have seen a burst of creativity, and several new ideas have exploded onto the scene. With regular competitive shooters, battle royales, hero shooters, and more on the market, where do you see Quantum League fitting in and carving out its own playerbase?

Our analysis is that most FPS players are getting progressively less “game-locked”, and are open to keep more shooters in their active library at the same time, which is great news for everyone as this fosters innovation.

In a way, Quantum League is the antithesis of battle royales: instead of player agency being diluted in a huge player count and gigantic map, here it’s all about you, and the solutions you are able to come up with to overcome your opponent. Our closed beta community has sometimes likened the feeling of playing QL to a game of fast chess. 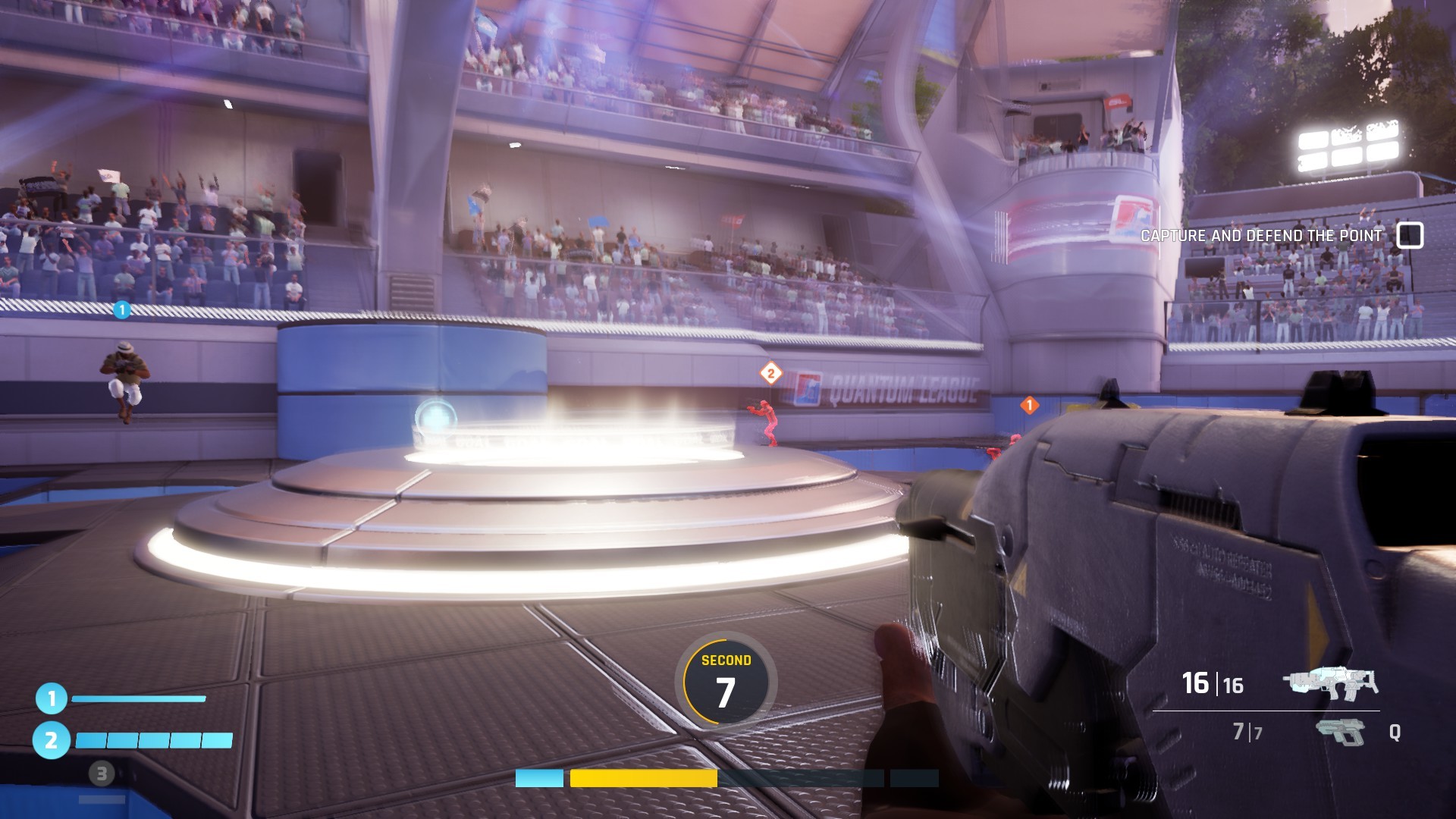 "Due to the game’s competitive nature, we’re being very careful with gating gameplay content per-level, so all our unlocks are currently only cosmetic. The game will not have a level cap."

Have you considered modes for Quantum League that go beyond the 2v2 count, or is the game’s very premise something that just wouldn’t work with higher player counts?

We have several ideas beyond the “capture the point” and “deathmatch”, both in 1v1 and 2v2. However, we’re saving most of them for the next iterations of the game. We believe the mechanics can offer a variety of different challenges for the players, but we need to be very careful when designing it as possibilities are endless and we need to consider each scenario. As for going beyond 2v2 into 3v3 and more, there are other things we need to figure out first, like performance and level design.

Can you talk about how much the playable characters differ from each other? Are the differences largely cosmetic, or can players expect to see gameplay advantages and disadvantages to each as well?

Currently the characters are only cosmetic. We’re evaluating a few ideas, but we can’t confirm any of that yet.

Can you talk about progression, and what sort of improvements or unlocks players will be working toward as they level up? Have you decided on a level cap for the game?

Due to the game’s competitive nature, we’re being very careful with gating gameplay content per-level, so all our unlocks are currently only cosmetic. The game will not have a level cap.

What can you tell us about Quantum League’s map design? I imagine the process of conceptualizing and then creating them would have been an interesting challenge given the game’s core gameplay mechanic and its smaller player counts.

Designing a Quantum League level requires careful consideration of the intended gameplay variables first, like loop length and player count, which define its scale and pace. Then it’s a matter of executing the level’s concept using prototyping tools as fast as possible, and test it with an active time loop. More often than not, ideas that seemed cool on paper end up being rejected at this stage! However, once maps get past this initial stage, the rest of the process is more straightforward: many playtest / polish cycles to get it to feel balanced and fun, and then fine-tuning cover and special object positions until the map is fair and fun.

What can players expect from Quantum League’s weapons as far as quantity and variety are concerned?

Our core game rule is that you pick a primary weapon for each clone that spawns, so we need to make sure that all weapons are balanced, but not in an absolute way: during natural play, we want players to recognize the gameplay situation they are in and go “this is the perfect weapon for this situation / tactic I want to use”.

Our ideal for adding a weapon is that it allows a tactic that wasn’t possible before. Due to this, we are keeping the number of weapons intentionally low up to our initial release, and plan on growing their number in future updates. 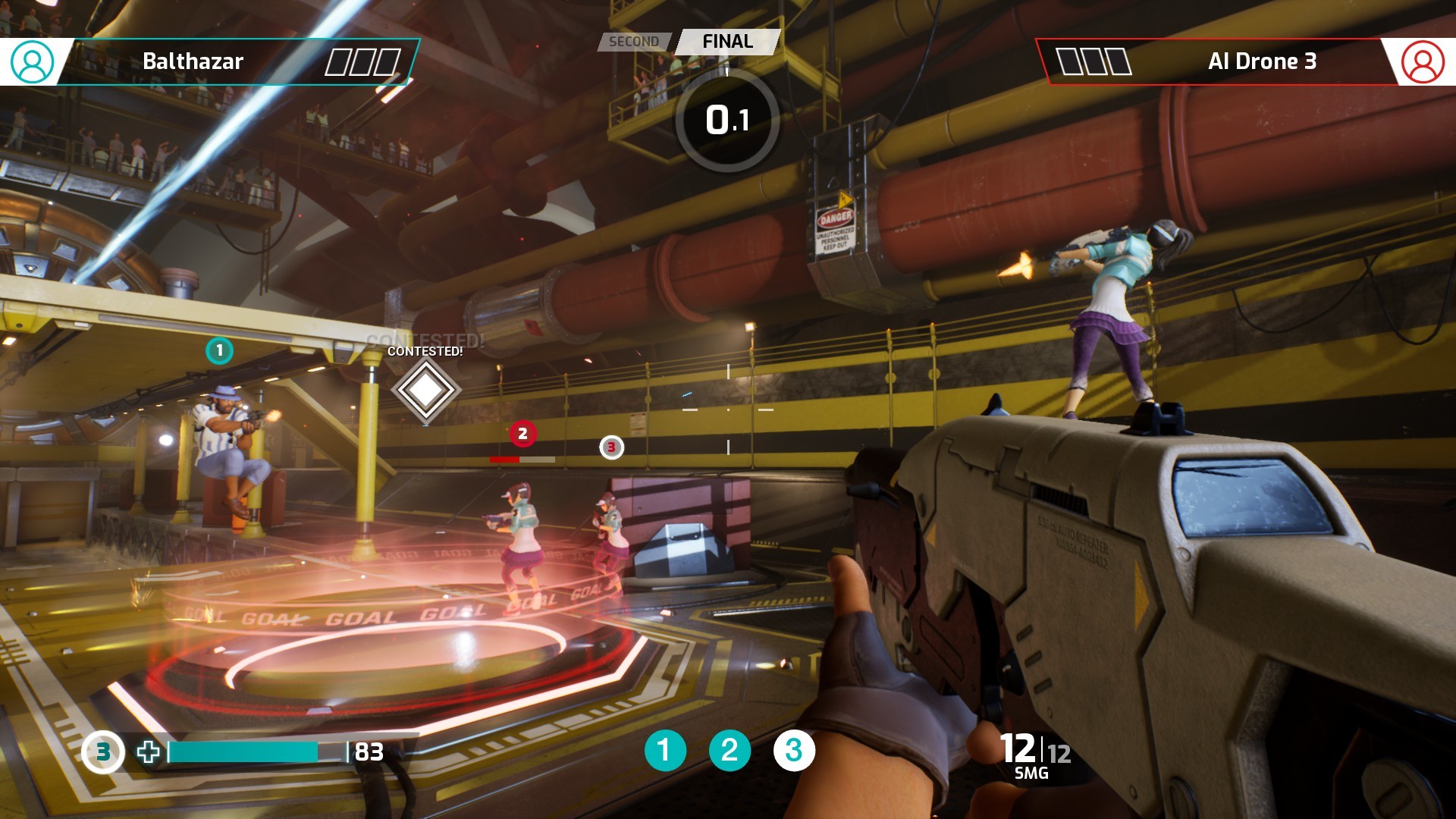 "After we launch, we’ll be sharing a roadmap with our players which details all features and major updates the game will receive."

What are your plans for Quantum League’s post-launch support, by way of updates or new content?

After we launch, we’ll be sharing a roadmap with our players which details all features and major updates the game will receive. What I can share right now is that we plan to grow the game in all possible dimensions: new maps, modes, weapons but also completely new gameplay mechanics once players have had a moment to get used to the game.

The game has been officially confirmed for PC (Steam) and Nintendo Switch. We want to bring the game to as many platforms as possible, but we’ll share those details later on.

The Switch version is still in active development and improving every day, so we still can’t give a definite answer on this particular subject.

With next gen approaching, have you given any thought to releasing Quantum League for the PS5 and Xbox Series X as well?

Nothing is off the table! 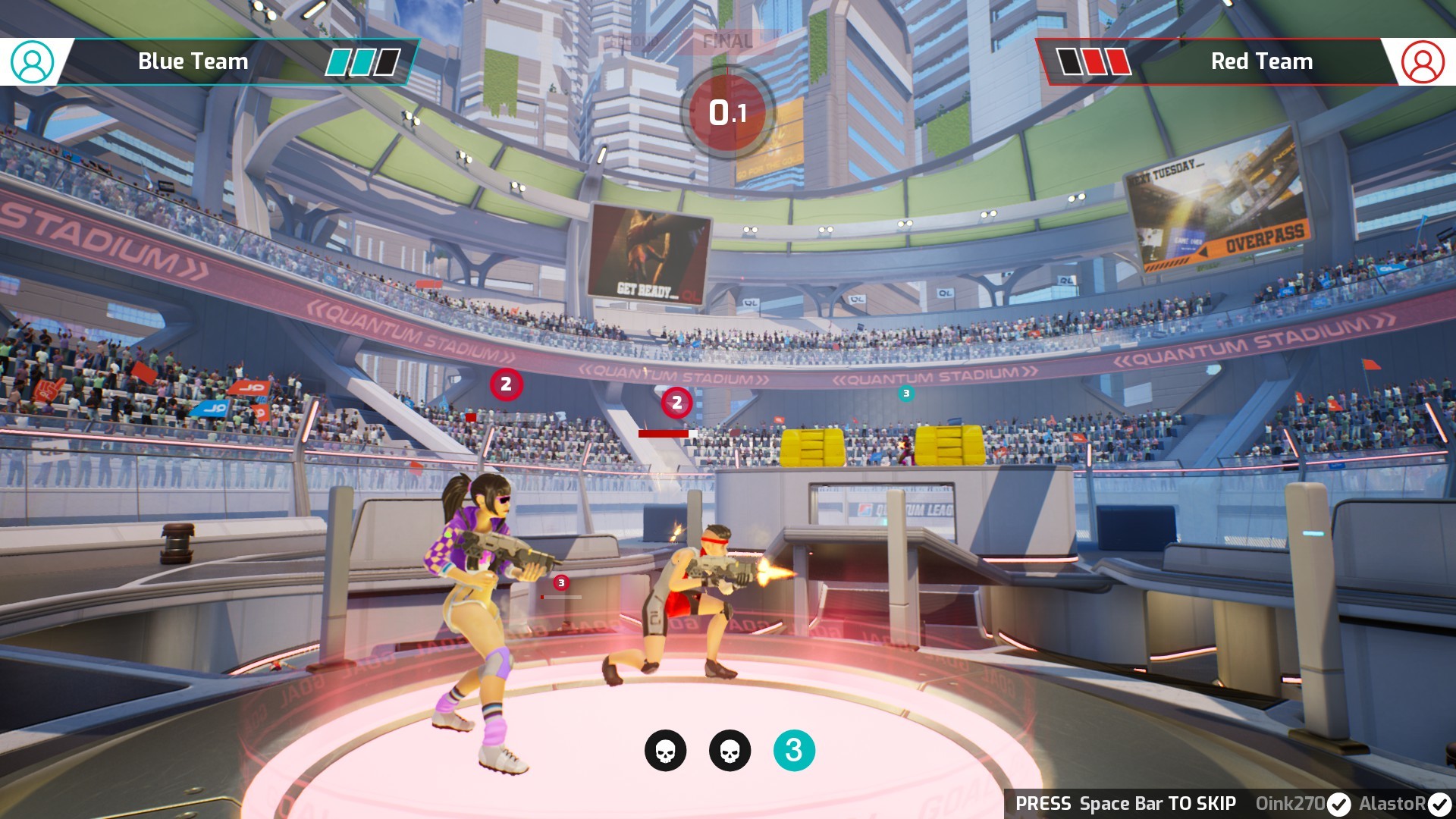 "All developers building multi-platform titles are bound by the lowest-spec target hardware, so the only advantage I can imagine there would be more stable framerates on higher-end resolutions for the Xbox Series X."

The PS5 features an incredibly fast SSD with 5.5GB/s Read Bandwidth. This is faster than anything that is available out there. How can developers can take advantage of this and what will it result to?

Well, it definitely should help loading times, for a start, but speaking as a game and level designer what this will probably bring over time is a kind of paradigm shift in how we structure our game worlds, and how detailed they can be. It remains to see what actual benefits we can get from that right now, as engine technology also needs to evolve to match the hardware advances, and developer mentalities need to catch up as well. Sometimes more isn’t really better (remember the Cell?).

The PS5 features up to 10.3 TFLOPs whereas the Xbox Series X has 12 TFLOPs. There is a difference there, but do you think such a difference matters in the long run?

I think it will mostly matter to Xbox-exclusive titles, which will be able to be programmed to get every drop of extra juice from the machine. It may also buy the new console a longer generation cycle. However, all developers building multi-platform titles are bound by the lowest-spec target hardware, so the only advantage I can imagine there would be more stable framerates on higher-end resolutions for the Xbox Series X.