Rachet and Clank Future: A Crack in Time Review

The Ratchet and Clank series has been one of the most respected and loved series ever to grace the Playstation platform. In 2007 the first Playstation 3 R&C game was released starting the Future story line. Ratchet and Clank were out to stop Percival Tachyon, the last of the Cragmites who were responsible for nearly wiping out the Lombax race and forcing the rest into an alternate dimension. After finally defeating him, Clank was stolen by the Zoni for purposes unknown to Ratchet. A Crack in Time follows Ratchet as he searches the galaxy for his best friend.

Along the way you will meet both familiar and new characters alike as you attempt to find Clank and stop my personal favorite R&C villain, The Evil Doctor Nefarious. Nefarious is trying to take control of The Great Clock, a device built at the exact center of the universe (give or take 50 feet) designed to maintain the fabric of time and space. Clank is the key to its use and he must gain control before Nefarious does. The story moves at a good pace and will last around 9-12 hours depending on how many of the collectables you want to gather. The final hour is the true action packed climax you’d expect, ending with one of the more memorable and emotional ending I have ever seen. 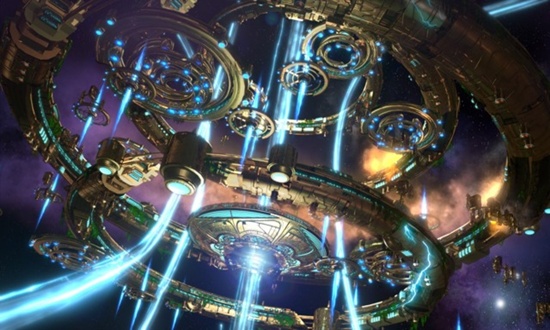 Instead of simply warping from location to location, Ratchet can explore each system using his ship and land on moons for collectibles or land on planets and stations to progress the story. In space combat is fairly dull as enemy ships are very easy to defeat. On the ground however Ratchet has access to his arsenal of ridiculous weapons. Each weapon has its own unique abilities and each it fun to use and highly destructive as fans of the series have come to expect. There are familiar feeling weapons, and then there are weapons like the Rift Inducer 5000, a weapon that opens a hole to another dimension allowing “Fred” to grab and eat your enemies. My favorite weapon while playing was Mr. Zurkon, a trash talking robot companion who would attack all who opposed him. The reason I liked his so much was his one-liners to enemies like “I shall let you live little alien…psych! Mr. Zurkon lives only to kill” or “You dare to hurt measly furball?” This is of course a testament to the great sense of humor R&C: ACIT has. Finally Ratchet’s newest toy is his Hoverboots. They allow hover off of ledges, hit jumps, and overall increase your movement speed through the game while in use. They open up fun new platforming elements that for the most part work very well.

Unfortunately Clank doesn’t have a trash talking robot companion and his one-liners are…well…less than stellar. He does however have a great new time mechanic. At certain points in Clank’s levels he will have to make copies of himself to open a door. You must move Clank onto a time pad and begin recording an action like holding down a button. Once you stop that, you begin recording on the other pad and can see a copy move to the button and press it which opens the door for you. As you progress you will face more and more thought provoking puzzles. These later puzzles will require your copies to do multiple actions each in order to open the door at the end. The time mechanic is a welcome addition that is the true driving force of Clank’s sequences.

Both Ratchet and Clank do suffer from the same issues. The camera can be very uncooperative at times and can make combat and platforming very difficult. There are also times ledges will become picky about where you land on them. If you do not land to their satisfaction, you hit a wall and plummet either to the platform below you or more frequently to your death. The same issue also occurs in some of the Hoverboot sequences. 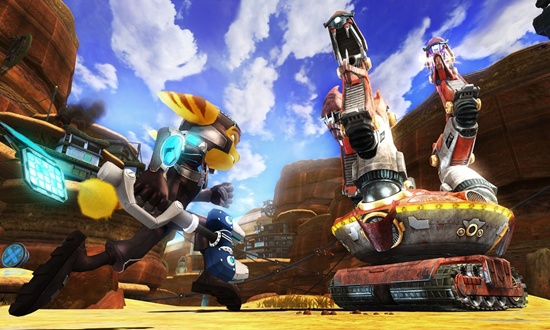 What did you notice first, the more vibrant graphics or the Hydra Tank?

The various worlds you will visit in your travels all look beautiful. The game engine shows improvements both in and out of cutscenes and has a lot more color. It’s like playing a Pixar movie, an explosive action packed rollercoaster of a Pixar movie. The voice acting is top notch with every role being delivered flawlessly. The music is also good with each world getting a fitting score.

A Crack in Time is continuing the trend of fantastic exclusives for the PS3 this year and is a must have for fans and newcomers. The action is great, the game looks great and sounds great, the ending is fantastic, and the overall experience is more than enough to satisfy gamers through multiple playthroughs.

Great visuals, Great arsenal of fun weapons, Great sense of humor, Terrific voice acting, Story is well told with an ending that will pull at your heart.

A copy of this game was provided by developer/publisher for review purposes. Click here to know more about our Reviews Policy.
Tagged With: A Crack in Time, PlayStation 3, ps3, Ratchet and Clank, Ratchet And Clank : Crack in Time