Radiant Historia: Perfect Chronology is an excellent way for fans and newcomers alike to jump back into Atlus’ time bending JRPG.

One of the best games in the Nintendo DS’s library was Atlus’ Radiant Historia, a wonderful JRPG in the vein of 16- and 32-bit classics, with beautiful sprite art, a moving soundtrack, and an arresting premise and gameplay mechanics. Radiant Historia was a great game, but sadly, it found itself largely ignored. It came at the tail end of the DS’s life, when attention was shifting to the then newly released 3DS, and saw a limited release in North America, and none in Europe at all.

Now, it’s been given a second chance, although, like again, it finds itself in a uniquely unenviable position- it’s releasing on the Nintendo 3DS (albeit worldwide this time), but it’s coming out after the Switch has already released, and attention for 3DS games, new or old, seems to be minimal. And that’s a crying shame, because Radiant Historia was always a wonderful game- and in its Perfect Chronology guise, it’s a veritable classic.

First, let’s get the new additions out of the way for anyone who has already played the DS original, and wants to know what new stuff this 3DS remake brings to the table, and whether or not it is worth their time: the 3DS game adds a new, third timeline, voice acting, a new artstyle, a new animated opening from A-1, some new music including a great new theme song, and new illustrations for events. What’s even better about all this is how smartly the new additions are integrated- for instance, to access the new content, you can simply choose to play the “Perfect Mode” from the beginning, which puts the third timeline front and center right away. Otherwise, especially if you are a newcomer, you can always just choose to play the Normal Mode, and play though Radiant Historia as it was on the DS (albeit with the new voice acting and new art), and then, once finished, play through a New Game Plus to see the new content for yourself. 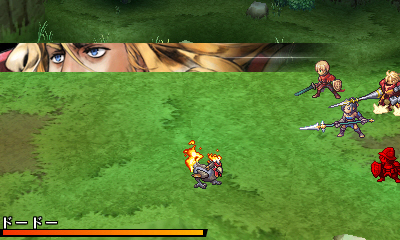 "Agent Stocke finds himself mired in the hopelessly labyrinthine politics of this war, and during a mission gone wrong, finds his comrades fall, and himself captured."

It’s a very smart way to juggle these additions to a game that has a small, but very vocal fan following- and the way Atlus have handled this, I am sure they won’t end up alienating any fans. Conversely, however, is the new art. The original Radiant Historia had a very muted and grounded look, art that was completely unlike most other JRPGs on the market. Perfect Chronology goes with a more anime style look, and while I think the game still looks very good, there will be those who will prefer what it looked like before- I do hope they give the new look an honest chance with an open mind, because even though it’s different, I think it still works, and especially complements the voice acting very well.

With all that out of the way, assuming you are a newcomer, what exactly are you getting into here? Well, Radiant Historia is a JRPG that tackles a story about a world on the brink of ruin, with an encroaching desert reducing the area of habitable land, and driving nations to war with each other. Special Agent Stocke finds himself mired in the hopelessly labyrinthine politics of this war, and during a mission gone wrong, finds his comrades fall, and himself captured- except, he happens to hold in his possession a curious book called the White Chronicle. The White Chronicle gives him the ability to travel through time, where he will have to navigate two alternate timelines as he attempts to restore what should have been the “true” history of the world, and save mankind from a ruin it brought about on itself.

You may have noticed that I am being as vague about the story as I can- because it’s an incredible narrative, and revealing even a little bit of it feels like I am doing it an injustice. What I can tell you is that the story is worth the investment, and the payoff is fantastic.

Radiant Historia makes this premise its central gameplay mechanic too, allowing you to travel to any ‘node’ in history (where the timeline branches), to try and fix your mistakes and shift history into the right direction. Simply seeing the immediately vast effects your choices and decisions have is fascinating, and makes jumping through time an actively pleasant experience, even if it can feel like you’re trying to grope your way in the dark to the right ending. 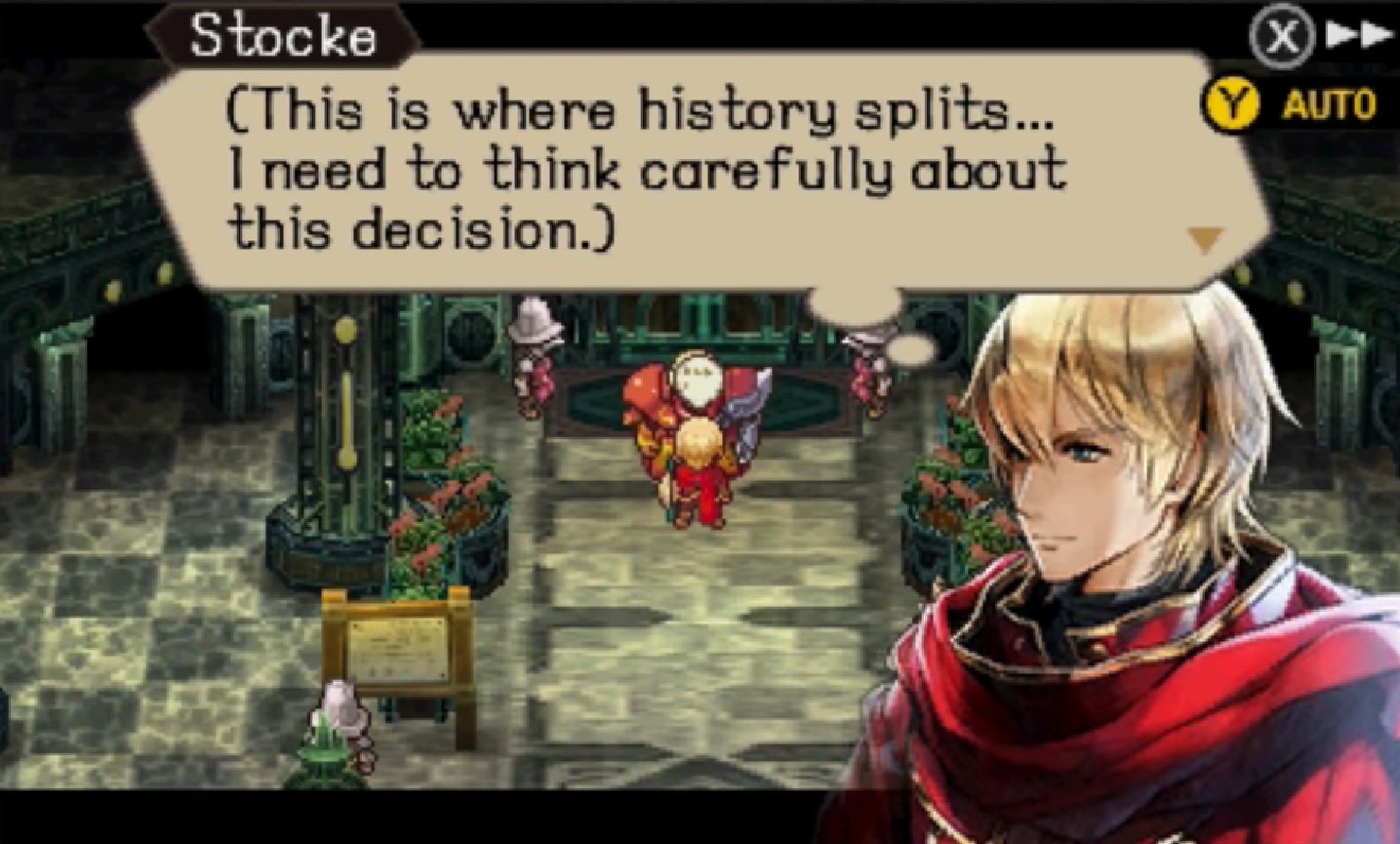 "Radiant Historia makes this premise its central gameplay mechanic too, allowing you to travel to any ‘node’ in history (where the timeline branches), to try and fix your mistakes and shift history into the right direction."

It helps that the story is populated by a very likeable cast (including a protagonist who is a departure from the norm for the genre), who, in turn, are aided by sharp writing, and some very good voice work- and if you don’t like the voice work, you are always free to head into the menu and just turn it off.

It also helps that the actual meat and bones that is the gameplay is fantastic- in addition to the whole visual novel/choose your adventure style time jumping mechanic mentioned earlier, Radiant Historia has a wonderfully inventive battle system; it’s turn based, and you get your standard Attack/Defend/Item options, but by putting the players on a 3×3 battle grid, it makes the act of positioning hugely important, and makes party composition a far more involved process than it would be otherwise. In a sense, it harkens to Atlus’ own Etrian Odyssey series, which has a similar emphasis placed on party placement.

This mechanic becomes especially compelling, because you learn abilities to move characters around on the grid, which means that, used properly, you can now unleash devastating damage on enemies (or defend your characters from attacks). It also helps that you have full control over the order of turns your party members and the enemies go in- you can see the actual order of turns at all times, and when it lands on a character you are controlling, you also have the option to swap out their turn with anyone else’s- friend or foe- right away. This, again, adds a glorious layer of strategy and nuance to the battle system, leading to some wonderful multi-turn combos strung together by moving characters around, on the field, and shuffling the order of their turns to ensure the right moves are pulled off in the right order.

All of this is tied together in a very pleasant package inasmuch as the presentation goes- the game looks great, though, again, the new art may end up turning off a fair few fans, and the music is wonderful, too. Make no mistake, however, this is a DS game at its roots, and it distinctly looks like one- but given how accomplished the presentation in the DS original was, that’s not exactly a slight against Radiant Historia: Perfect Chronology in the slightest.

In the end, this is a wonderful JRPG- and if you are a fan of the genre, and still have a 3DS kicking around somewhere, I cannot urge your picking it back up and playing through this game enough, especially if you never played through the original.

The new artstyle could end up turning some people off

The passage of time has done nothing to diminish the beauty of this fantastic RPG.

A copy of this game was provided by developer/publisher for review purposes. Click here to know more about our Reviews Policy.
Tagged With: Atlus, Nintendo 3DS, radiant historia perfect chronology