To start off with this Review, I would like to mention this game is free of charge for the week, so if you havn’t already, make sure you download it.

So Rag Doll Kung Fu is a blast to play, the game features some very nice physics and gameplay elements, that are not new, but are done very well and are a big part of what makes this game really fun.

The game features tons of content, Challenges, Multiplayer, and Customizabilty. You can start off by creating your own character, you wont get much customization since you just started the game, but as you progress , you beat challanges which earn you more clothes and customization of your character, such as faces, hats, shirts, etc. The game also features Trophies, and some of them are the challanges that you have to do to earn clothes, so if you earn a sertain trophy, you might get some rewards with it too. There arn’t alot of trophies to collect, but let me tell you they are pretty damn hard and you will need alot of skill to earn them.

The single player aspect of the game, called “Challenges”, there are is a different challange every time, such as Survival, King of the hill, and Capture the Fish. but to get all the challnges you will have to beat each one on at least Bronze. The single player aspect is very short, meaning about an hour or less, though each challange, you can beat it on bronze, silver, gold, and plastic, which gives alot of replay value because you get trophies and rewards for doing so. The single player is hard, i can tell you that for sure, i barley got 1 challange on silver, but you need mad skills to even get all the challanges on silver, so the game is not easy, which is a good thing.

The multiplayer of the game only features local offline multiplayer for up to 4 people, so if you have friends over, this is a fun game to play. The multiplayer mode features 4 gameplay modes, all of them are in the singleplayer except for the mode called “Dodge Ball” which brings a ball into the arena, and the player who hits the most people with the ball wins.

You can choose between a variety of maps to play in, though some do not support all the game types.

If you dont have 4 controllers, or in fact 2, you can bring in bots, so  you can play all the game modes with bots, or 2 people with 2 bots, and so on, so this is a good thing to have if you only have 2 controllers or 3 and some games are far better off with 4 players. But the fact that there is not online mode in this game except Online score board, it is a bad thing, and hopefully there will be an update giving us the ability to play online with friends.

The graphics of the game are not bad, in fact are pretty good, the game it self is chartoonish in a way, but overall the graphics are ok. 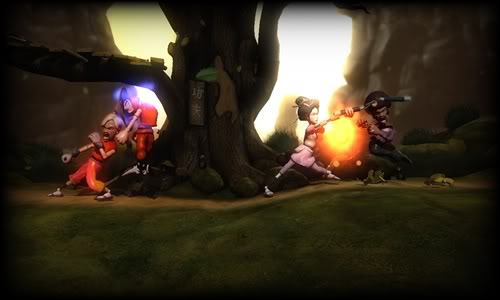 Gameplay wise the game is good, the characters you play as are sort of action figures, and you can move them freely much like action figures. There is a variety of special attacks in the game, which most of them are used using the Sixaxis controller and are very hard to execute so youll have to practice alot. Though the game is also very funny gameplay wise, its full of comedy and stupdity, but in a good way, which is one of the best things about this game.

The conrolls are your average fighter controlls (X to jump, Square to punch, Triangle to kick) and are very easy to get used to (except for the sixaxis), but overall the gameplay is really fun.

The sound of the game is pretty good, sound effects sound nice, as well as a characters reaction to a hit, more or less screaming. There is also an awesome theme song for the game which is funny as hell! 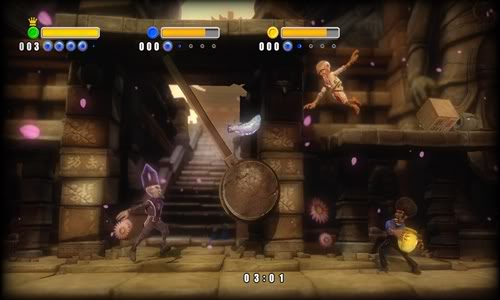 Ultimately, Rag Doll Kong Fu: Fists of Plastic, is a good game, full of fun gameplay and replay value, great local multiplayer and some very nice physics, though no online is a really bad thing. This game is a great purchase to any one, and considering is free for the week, its a must get.

Great gameplay and local multiplayer, and a good amount of replay value

Final Verdict:
SUPERB
Rag Doll Kong Fu: Fists of Plastic is a game that should spend your time playing through, especially with friends.
A copy of this game was provided by Developer/Publisher/Distributor/PR Agency for review purposes. Click here to know more about our Reviews Policy.