Posted By George Reith | On 18th, Apr. 2011 Under Previews | Follow This Author @GNReith

Who doesn’t love a good Horde mode? The ever popular co-op mode against waves of AI enemies has found its way into many popular shooter franchises, with a Red Faction makeover culminating in the upcoming Armageddon’s Infestation mode. If you want to take down weird ass aliens, and a bunch of buildings in the process, this may be the mode for you. In place of the conventional competitive multiplayer modes, Volition have given us the Infestation mode instead but, having been given some hands on time with the modes, I can honestly say that you won’t miss team deathmatch games too much. 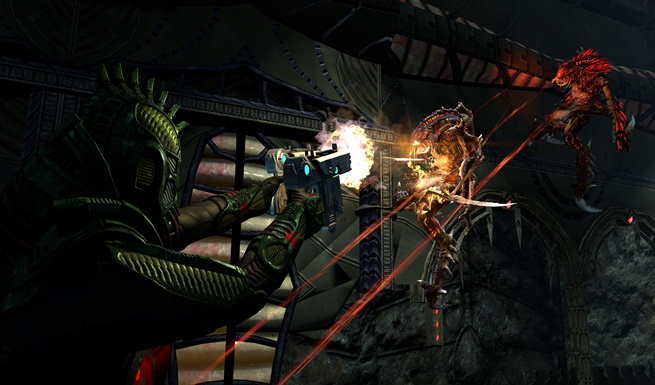 The new enemy types will really keep you guessing

The first thing I noticed was the way the new enemy types change up the traditional co-op survival formula. The new alien enemies that antagonise you in Armageddon really add to Infestation, as their absurd agility and nimble nature mean they can break through any formation you try to set up with your team mates. They also add more variety to the proceedings than the standard humanoid type enemies.

In order to combat the alien menace you’re going to need a variety of tools, an area where Armageddon really delivers. Those of you who’ve had the initiative to read my previews of RF:A’s Campaign and Ruin modes will know that the weapons are varied, intuitive and fairly original. I was also impressed with how Volition start you off with very little and allow you to build up. As you compete in Infestation rounds you slowly increase your arsenal until you have full pick of the game’s varied armoury. It’s a small feature, but it really adds a nice sense of progression to the proceedings. Complementing this are the passive upgrades that run through all game modes. These can be upgraded as you collect salvage, either through pick-ups in the single player, or by wasting waves of aliens in Infestation. There’s nothing like having your upgraded powers crossing over between game modes. 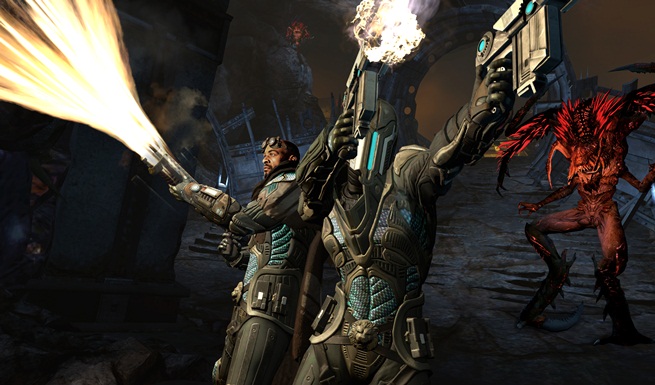 You'll have to work together in order to survive

One element of the other two modes that turns over a new leaf in Infestation is the nano forge. Rather than providing upgrades, as in Red Faction: Guerilla, the nan forge offers you a variety of different abilities that are mapped to the right bumper. What keeps things interesting is how each of the four players in an Infestation game are assigned a unique nano forge ability for that game, meaning you all have to work together to get the most out of your team’s powers. You also need to be there to revive each other if you go down; something which happens a lot on the harder waves.

What impressed me most about Infestation was its variety over other modes in competing titles. Though I didn’t have enough time to try all of them out, there seemed to be a decent number of maps, ranging from closed corridors to wide open environments. The objectives can also differ with defence modes being thrown into the mix. Having to defend a particular structure from your adversaries really adds a new dynamic to things, and gives a new found use to you repair grenades. Just be careful you don’t go too mad with the magnet gun, as you can easily wind up accidentally destroying your own structure. And yes, that’s me talking from experience. 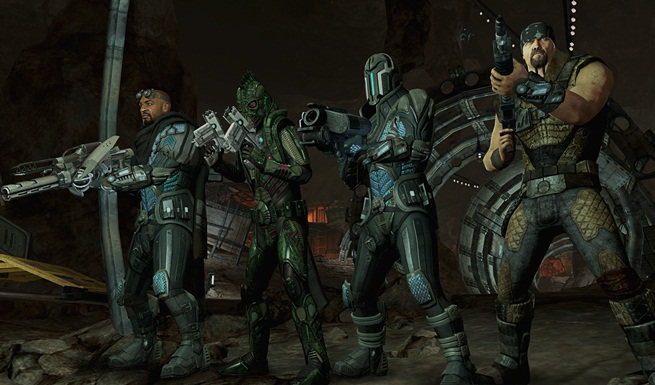 You can unlock new guns based on your performance, adding a decent sense of progression to the mode

What else is there to say about Infestation? There’s nothing like facing off against brutal and monstrous aliens in a digital arena to bring people closer together. It’s fast, furious and fun and will dominate a lot of your time when Red Faction Armageddon launches in June.