Posted By George Reith | On 10th, Mar. 2011 Under Previews | Follow This Author @GNReith

THQ were kind enough to let me have a hands on test of the upcoming Red Faction: Armageddon earlier today and, having spent some time on the game’s single player mode, I can promise series fans and newcomers alike that they will not be disappointed. The game is a true sequel to 2009’s Red Faction: Guerilla, tightening loose screws, adding some crazy new weapons, and taking the series’ trademark destructible environments to a whole new level.

The level I was fortunate enough to play started with a bang showing us our main character Darius Mason (who just so happens to be the grandson of Alec Mason from the previous game), escaping from a rather dangerous misunderstanding. Having been tricked whilst on a contract into awakening an ancient plague that threatens Mars, Darius is forced to escape his pursuers by traversing through a sewer system. Red Faction: Guerilla was largely criticised for its rather sparse narrative and story elements, but you can tell that Volition have listened to the feedback for Armageddon. From the small window I was given into the game’s campaign mode, it already looks more cinematic and story driven than previous games in the series. 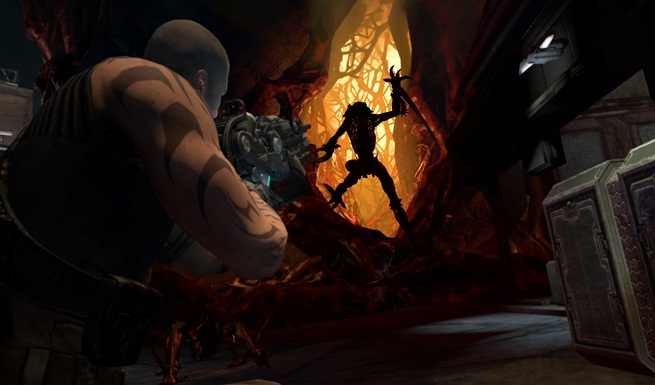 The campaign is more intense and cinematic than ever before

Though Armageddon feels much like its predecessor, there have been some major control alterations between the third and fourth instalments of the series. The alternate fire functions have been removed from all weapons and have been replaced with nano forge abilities that you can launch instantly with a tap of the RB. You can also hold it down to open up a menu, allowing you to use multiple abilities on the fly. I wasn’t able to get a good look into all the nano forge abilities, but the quick fire shockwave ability I had equipped by default came in handy as a quick tactical strike. This became especially helpful when I found myself caught off-guard, an occurrence that was eerily frequent throughout my time with Armageddon due to the new breed of enemies Darius must face. Whilst Guerilla treated us to humans, humanoids and even more human-like adversaries, the foes of Armageddon take on the form of alien creatures that really keep you on your toes. The alien forms have allowed Volition to play around with enemy sizes and shapes, meaning there are more giant ass behemoths and stealth cloaked spider creatures and less random swat guys swarming you in groups. The action came thick and fast as a result, and the fact that the enemies constantly spawn unless you destroy the fleshy pods they generate from made the adrenaline pump even faster. I was rather impressed by how high the pace was kept throughout. 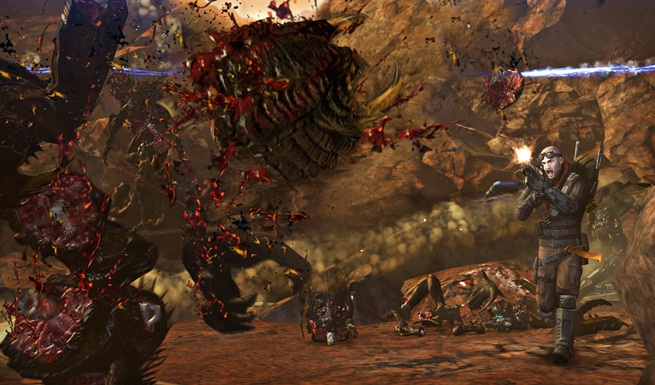 Helping you counter these new bad guys is a rather impressive array of new weapons and abilities. All kinds of different pistols, grenade launchers and rapid-fire arms are at your disposable, but one or two exceptions truly stood out. The big one seen in recent announcements is the magnet gun, which is truly as fun as it is powerful. Simply fire it at one target, then fire it at a second and the former will hurtle toward the latter. Don’t like an enemy? Throw a building into him. Don’t like a building? Do the reverse. There are bound to be a lot of creative uses for this little beauty, but even the simpler stuff is still going to bring a smile to your face. In terms of sheer macho fire-power the mech battle suit was a blast (no pun intended.) With unlimited machine gun ammo, shoulder mounted rocket launchers and a meaty shoulder barge attack, the battle suit will see you smashing through your foes and their surrounding environment with ease. It’s also nice to see it not being a scripted sub-level. It works just like any of the vehicles from Guerilla, letting you hop in and out as you please, keeping the gameplay varied throughout.

One of the more subtle, but nonetheless crucial, additions came in the form of the permanently mapped repair abilities. Whereas in Guerilla some key objects that were necessary for progression were mysteriously indestructible, Armageddon now has the room to make nearly everything go boom. If you accidentally wipe out a staircase you need to progress further in the level, simply hold LB and your repair ray will have it back in working order within seconds. You can also fire repair grenades by tapping the button that affect a wider area. It’s a small improvement at first, but it allows them to take the famous Geomod technology of the series to the ultimate extreme. No piece of the environment is safe. Now if only all shooters could include similar tech, our industry would be a better place. 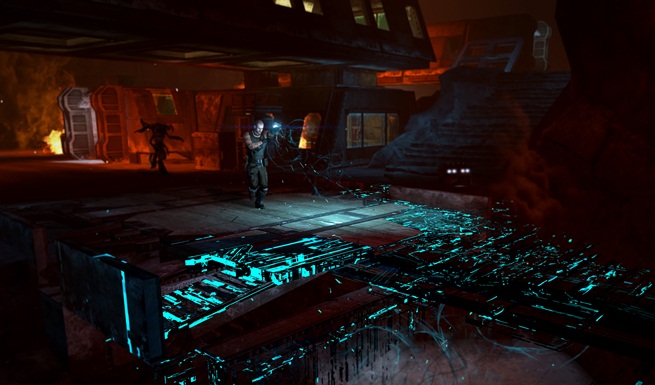 When it comes to wanton vandalism and destruction in Red Faction, Armageddon has left me with one doubt in how salvage is now handled. Nowadays you need only find random salvage crates littered through the levels, but in Guerilla you were awarded salvage for blowing stuff up. In a way it concerns me that with all the impressive physics of the destructible environments, there might not be enough incentive for players to really put the engine through its paces. That said, does anyone really need an excuse to blow stuff up? On the plus side the new upgrades you can get with your salvage are a vast improvement over what we saw in Guerilla. The tiered upgrades increase in volume as you progress through the game and cut a nice balance between passive boosts and active nano forge abilities. There is also the huge bonus of your upgrades being shared between all of the game modes in Armageddon. It definitely adds more incentive to try out all of the modes when experience is shared between them.

My only other concern is in terms of level design. Whilst the sewer level I partook of was well structured, it felt rather enclosed and claustrophobic. Though I’m definitely glad Armageddon feels tighter than the occasionally haphazard pacing of Guerilla, I can only hope (and assume) that we’ll get enough open environments to counter balance the corridor style gameplay I got a taste of.

Despite my usual scepticism towards… everything, I found myself coming away feeling unusually positive about Armageddon’s story mode. Some of the voice acting got on my nerves, but this is a small price to pay for a more intense narrative, even more destruction than ever before and the best Red Faction gameplay yet. Keep your spirits high people. This will definitely be one to look forward to.