Red Faction: Armageddon has a completely different system when it comes to the mechanics of the game from Red Faction: Guerrilla, everything is generally the same but things seems to flow a lot better when it comes to the controls.  The biggest change from the last game though is that developer Volition took out the multiplayer/versus and replaced it with a co-op mode that is pretty much wave after wave of enemies to annihilate with up to 4 of your friends, which is a lot of fun I must add.  Taking out versus in a game though in no small change.  There is obviously the campaign and RUIN Mode which I believe, you can only play if you purchase the game new.  In RUIN mode, it is literally destroy as much as possible within the time limit and it is a blast.

The story of Red Faction: Armageddon takes place on Mars and a Terraformer kept Mars habitable on the surface, that is until the cultist Adam Hale destroys it, forcing the Mars colony underground.  The destruction of the Terraformer was due to Hale’s father being killed by Adam Mason many years ago, pushing him to seek revenge on his family and Darius Mason, Grandson of Adam Mason.  Ten years have passed of living underground, with the colony living a harsh life until the colony is put in danger yet again.  An Alien threat becomes a problem for the colony to survive underground, Darius Mason is now forced into battle once again, with the help of his Nano Forge, he must stop the Alien threat while seeking out Hale. 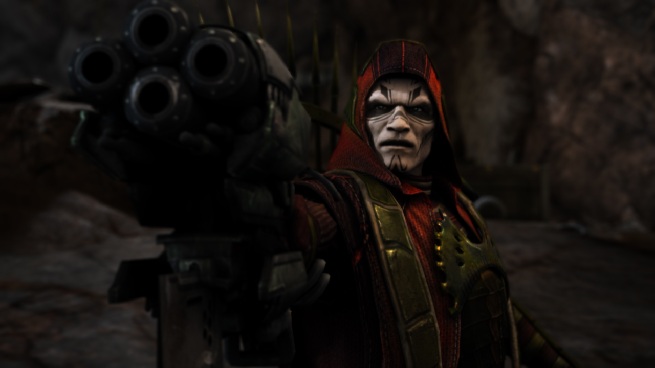 The campaign and its story can tend to be a little all over the place as you have you partners in war Sergeant Frank Winters and and science knowledgeable Kara.  Winters is by the book and has little sense of humor as he is headstrong in completing the missions.  Kara, who can be seen as Darius’ opposite as she was born a Marauder, smuggling goods on Mars, with the only thing bringing her and Darius together being that they both need to stay hidden.  Aside from the storyline itself you can’t help but have fun throughout it as certain levels you can use a giant Mech that destroys everything in it’s patch between its missiles, machine gun and stomping melee moves.  There are other vehicles as well but the Nano Forge is another useful toy that you will use quite often throughout the campaign.  The Nano Forge can be used as an offensive or defensive tool, and all of its abilities are upgradable by collecting salvage through the game.

As fun as it is to destroy literally everything you can set your eyes on, using the Nano Forge you can rebuild anything that has been destroyed even if you are not the one who did it.  This can be a great thing when you are being attacked by an swarm of aliens and there is no cover around, as you can use the Nano Forge to rebuild buildings or random parts of an area to take cover on.  You can destroy a bridge watching enemies fall to their death and then go back and rebuild that bridge.  Being that much of the campaign is underground in caves though leaves a little less destructible environments than there would be say on the surface of Mars.  The Nano Forge can also be a deadly tool as well with a number of upgradable powers.  Shockwave launches all enemies in the nearby radius in the air, suspending them in the air where you can take them out with ease, especially as it is upgraded lasting longer and damaging them while they are in this field.  Impact is just like a damaging force push only it can generally kill enemies if not launch them away from you.  Berserk is an ability that will give Darius an overcharge making him deal much more damage with all weapons for a certain period of time.  Shell is exactly what it sounds like, putting up a force field that prevents incoming projectiles from coming through. 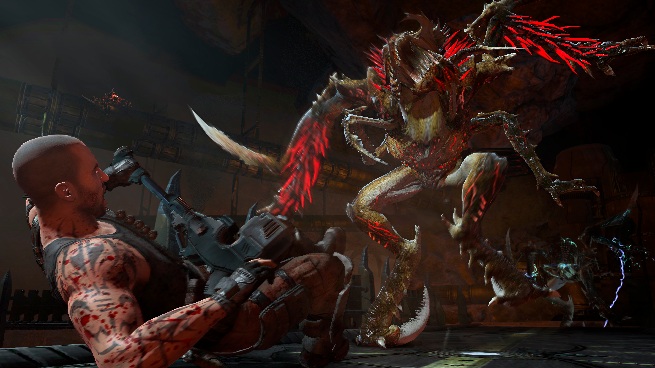 As for the weaponry in Armageddon, you will of course have you assault rifle and grenade launcher but it is the super destruct weapons that really make the game fun.  You have your Singularity Gun which creates a small black hole sucking everything in its radius inside of it which is one om personal favorites.  Then there is the Nano Rifle that launches a load of nanites programmed to dissolve anything they touch.  Of course will will always have your trusty Maul melee weapon which is an upgraded version of the EDF Sledgehammer among many other weapons you’ll come across.  The newest addition and most unique weapon added to the game is the Magnet Gun which can be used for multiple purposes, especially useful if you want to save on ammo.  This bad boy can bring down buildings or fling an enemy into the ceiling or even into another enemy.  The Magnet Gun has a first shot that fires a Magnet onto almost anything whether it’s enemies or destructible environments and then a second shot that magnetizes the first shot together.  You can do some really interesting things with this thing.

Aside from the campaign there is Infestation Mode and Ruin Mode which are both very fun.  Infestation mode is what is replacing the versus mode, which is a co-op mode that can be played by yourself, two people or up to four friends.  You will be swarmed by alien waves that never seem to end, but they do and there is a marker that tells you how many enemies are left and where they generally are.  You will play as a character from the game and have the choice of picking your weapon load-out upon starting you battle to reach waves 1 through 30.  The more you progress the more upgrade tiers you will unlock.  This mode is most fun will a full team as you can do things cooperatively, using strategies a the magnet gun can even be used cooperatively.  Depending on the map you are playing on you main objective will either be defend a certain position of just to simple survive.  The salvage points you collect in Infestation mode also carry over to campaign and visa-verso.  Ruin Mode is fun as well, but can only be played alone as you try to beat high scores and unlock new maps.  Each level has a score you will have to reach in order to complete it and unlock the next map to play while the more destruction you do in a small amount of time gives you a bonus to you score.  There is also a Free Play mode here where there is no timer or anything you can just wreak havoc and destroy things or rebuild things at will, best for trying out which weapon types are best for that specific map or in general. 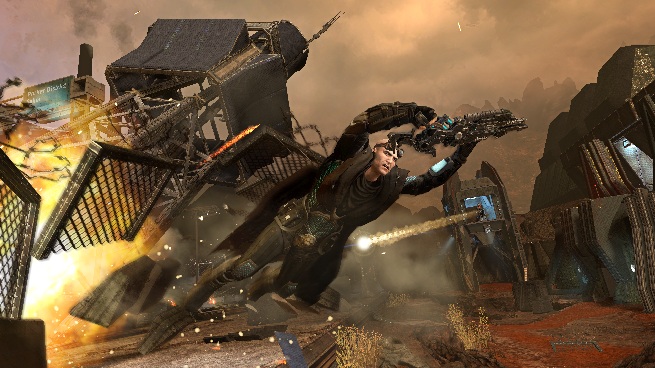 Red Faction: Armageddon in my opinion is a better game than the last one, and it has so many fun elements in it, you would be lying if you said you didn’t have fun after trying it.  I mean with nearly everything be completely destructible and rebuild-able it is almost like a dream come true for some people.  The only downside to the game really is that with the replacement of versus with Infestation mode, in can get old after a while.  I personally did not enjoy the versus in the last game all that much, but it gave it more replay value.  Now if Red Faction: Armageddon keeps coming out with DLC than that’s another story and will keep you tied to it.  But the game is a blast and I suggest purchasing with a few friends to play it with.

The co-op mode features everything in the game with the ability to play with up to four people and your salvage points carry over from campaign to Infestation Mode. Destroy=Fun.

No versus mode, lowers the replay value.

An absolute destruction-fest with new ways to destroy everything and the ability to rebuild it all. New modes take the game to a different place.

A copy of this game was provided by developer/publisher for review purposes. Click here to know more about our Reviews Policy.
Tagged With: Red Faction: Armageddon, thq, xbox 360