Resistance 2 is a first person shooter by the well-known Insomniac Games. It is hard to believe but this is their fourth game on the Playstation 3 (Resistance: Fall of Man, Ratchet and Clank Future: Tools of Destruction, and Ratchet and Clank Future: Quest for Booty). Resistance 2 is an improvement from the first game in almost every way, but the key word is almost.
Starting off, the game’s visuals are technically sound. You might find some muddy textures here and there and the character models are not the highest resolution, but throughout my playtime, there was zero slowdown in frame rate. This is especially impressive when there are dozens of enemies on-screen whether it be the AI in single-player or real people in the competitive multiplayer. It is just as impressive when the enormous Leviathan from the trailers for the game is walking around Chicago. All in all the graphics are impressive and technically sound. 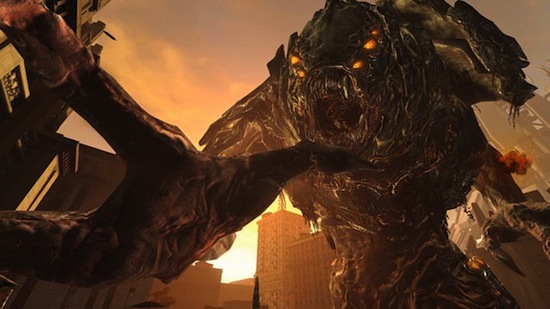 Yes, you will fight this in the game and it is larger than most buildings in Chicago apparently.

The gameplay is largely the same with a few changes.  You can now only hold two weapons (ala Halo) instead of being to hold all of them in the first Resistance.  Insomniac also decided to include a sprint button which is definitely a welcome addition when trying to get from one enormous area to the next.  One thing the established studio changed which takes away from the challenge of the game is the health system.  In the original, Resistance: Fall of Man, you had a health bar that was divided into four segments.  After an early event, you would regenerate health up until the end of the bar you’re in.  For example if you had two and a half health segments after a battle, your health would regenerate up to the end of the third bar so instead of two and a half, you now have three segments.  However if you wanted that fourth segment, you would still need to find a health pack.  In Resistance 2, Insomniac adopts the approach of Gears of War, Call of Duty, and many other games with a complete regenerating health system where if you get shot, you will see your screen slowly turn black and white (in Resistance 2 only) which tells you to find cover, wait a few seconds, and you will have full health once more.  While it is good to make the game easier for more casual players, the health bar system of the first game worked fine.  The last thing to say briefly about the game is that the weapons are fantastic each with a useful secondary fire.  Innovative weapons are a trademark of all things from Insomniac Games.

The story of Resistance 2 is overall not as compelling and not as cohesive.  In the original, as well as this installment of the series, you play as Nathan Hale who at the end of the first game was taken away by a group of mysterious soldiers.  In Resistance 2 it is revealed that the soldiers who took him away were a group called the Sentinels, other soldiers like Hale who were infected with the Chimeran virus.  From the introduction you basically go from location to location from one battle to the next with no real sense of completing or doing anything really important.  Even though you do not receive that sense of completion, the gameplay is still super fun and sometimes the story will just seem superfluous since so much fun is being had.  One aspect of the storytelling from the original game that worked so well were the in between mission commentaries by your CO Rachel.  It gave a real sense of cohesiveness to the story where if she wasn’t there, you might not have picked up on as much.  Another thing that doesn’t detract from the story itself but more so the experience is that Hale talks.  He said one or two things in the first game, but that was it.  In Resistance 2 he is barking and yelling orders to everyone.  You really came to like him since he was just a man on a mission not complaining about anything.  Now he tends to become irritating.  The ending of the single-player campaign will leave most people scratching their heads but all in all the single-player campaign is decent.

The multiplayer on the other hand is where this game shines.  There is cooperative and competitive modes.  First let’s talk about the co-op.  Unlike the first game where co-op was going along the main story just with another person, the co-op in Resistance 2 is a separate campaign which can be played with up to seven other players over Playstation Network.  There are six maps with different points you start at to complete the mission.  In order to win these maps all players will need to choose one of three classes: the soldier, the special ops, and the medic.  The soldier is expectedly the tank who has a minigun and can put up a shield that deflects all fire.  In order for his shield to stay up and running, he will need a special ops (or spec ops) since he can give all of the other players ammo consistently.  However in order for any of them to stay alive they will need a medic who can shoot healing blasts from his gun to heal the other players.  This is one of the first games in awhile where each class is really dependent on one another.  Overall the co-op is fantastic. 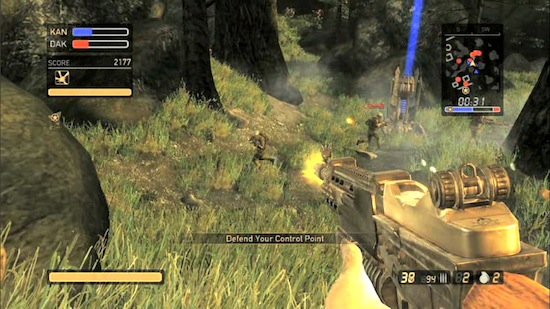 The multiplayer in Resistance 2 is extremely addictive and will keep you coming back for more.

The competitive might not be quite as good as the cooperative, but it is no slouch either.  While there are only four maps there are different regions you play in depending on how many players are in the game.  While that might sound lacking, it really isn’t and the maps do not become stale.  Up to sixty people can play online at once in any one of the game’s game modes which include deathmatch, team deathmatch, core control, and skirmish.  The competitive is fun but just not as satisfying as the cooperative.

The music in Resistance 2 is the usual orchestral-type soundtrack played in most big games these days.  And just like those other games, it works very well here.  The voice acting leaves some to be desired (shut up Hale!) with the best performance being Dr. Malikov’s character.  As far as sound effects go, explosions sound like explosions, grenades sound like grenades, and pretty much everything sounds like it is supposed to.

This will stay in your Playstation 3 for quite some time.  The single-player clocks in anywhere from eight to eleven hours depending on difficulty and if you’re looking for the collectible intel documents.  The competitive is very solid along with the surprisingly great cooperative; in short, you will get your money’s worth.

Resistance 2 is definitely in the pantheon of elite games for the Playstation 3 right now and for good reason.  Yes the story might have been not as cohesive or seemed as purposeful as the original but they took some interesting steps with it.  The multiplayer is fantastic and Insomniac should be awarded for the quality of their servers.  While the single-player is somewhat lacking, the multiplayer makes up for it and then some.  This is a must own for Playstation 3 owners.

Lackluster story with a questionable ending, graphics are not the best, some voice acting can be irritating

Final Verdict:
EDITOR’S CHOICE
Resistance 2 is a follow up to the very popular PS3 launch title with a new story and a multiplayer that will keep you coming back for a long time to come.
A copy of this game was provided by Developer/Publisher/Distributor/PR Agency for review purposes. Click here to know more about our Reviews Policy.