Revenge of the Titans Review

Two trends in gaming have dominated our fair market as of late. We have a surge of very similar Tower Defence games to match many casual gamers now purchasing smart phones, and we also have an obsession with retro gaming in all shapes and forms. Merging these two populist gaming styles together is Puppy Games, with their highly polished Revenge of the Titans. It is a well made Tower Defence at its core with an extra dosing of strategy thrown in for good measure, but there are one or two issues that will put off a majority of more casual players.

Those of you familiar with any Tower Defence games with a science fiction setting will feel comfortable with Revenge of the Titans. The Titans, a bizarre alien race that look like rabid dog monsters, are attacking earth. It is up to you to stop their onslaught by strategically using your resources to build new technology and weapons that will slay the alien menace. 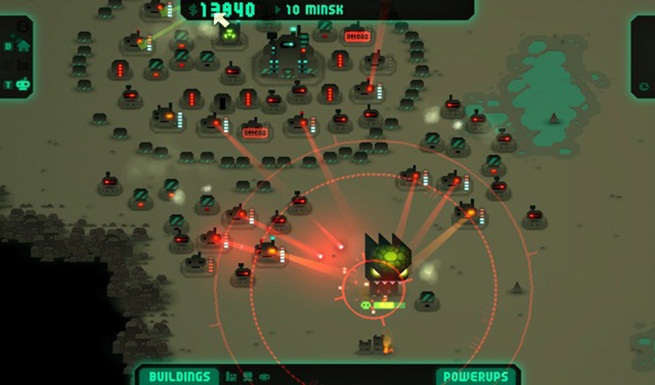 Boss monsters ensure that the action never lets up

The standard Tower Defence formula is largely unchanged in Titans, with the eponymous aliens marching upon your base at a steady rate. What mixes things up somewhat is the infusion of basic RTS components. The big one is resources, with all turrets costing a set amount of cash that you must earn by placing refineries on resource points. The other element is that the Titans can attack your structures. It’s such a simple change, but it turns the usually leisurely pace of the Tower Defence game into a hectic battle for survival. It is tough, and you will wind up barely clawing victory from the jaws of defeat on multiple occasions.

Whilst these RTS inclusions are fun, it is the persistent tech and research elements that starts to drag things downhill. At the beginning of each new level you may choose one new technology, ranging from new blaster and refinery types to research options that further expand your weapon selection. It’s a feature that gives the game a great sense of progression, though at a hefty price. Each new enemy type that is introduced has a specific weakness and, as many of the weapons required to exploit these Achilles heels need a few research options opened up first, you can often find yourself overwhelmed by enemies that you can’t get a counter to for the next few levels. It is frustrating, and the lack of advanced warning before these sorts of situations is a real pain. The truly dedicated will find a way around it and be able to persevere, but I can see more casual players giving up at moments like these. The difficulty of Titans usually gives it a great “just one more try sort of feel,” but times like these made me want to throw in the towel. 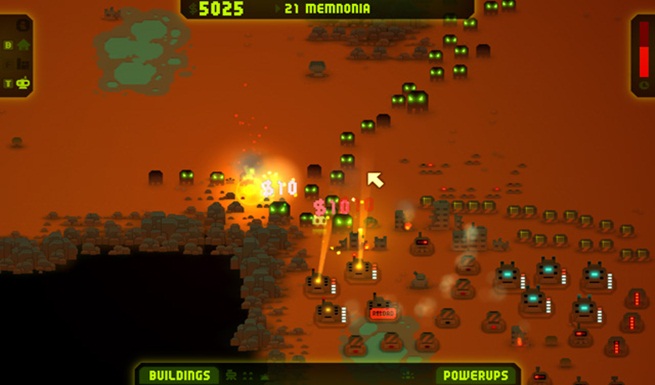 The graphics are gripping, but can look a little samey after a while

While we’re on the topic of enemy types, there is another issue: They all look very similar. The game adopts a retro style that, despite being very gripping and vivid, is flat across the board. It’s quirky and fun, but it results in turret and enemy sprites all looking near identical. The levels suffer a bit from this monotony as well, though not to the same extent. There is also the issue of the interface being slightly cluttered. If you invest enough time to learn the shortcut commands for each building then this isn’t a problem, but more casual players who are going to rely on the standard point and click method of building selection will find that the tiny icons and lack of immediate feedback on structure prices will limit their enjoyment somewhat.

Though the game won’t appeal to all demographics, those who dig Revenge of the Titans will find a lot to love. The campaign alone is extensive, and the endless and survival modes will keep keen players coming back for more. The new boxed addition we received for review also allows players to get a free digital copy of the game via Steam, which means that players will get the updates and DLC for free as they come out. It all makes for a value for money package, provided it’s your sort of thing. 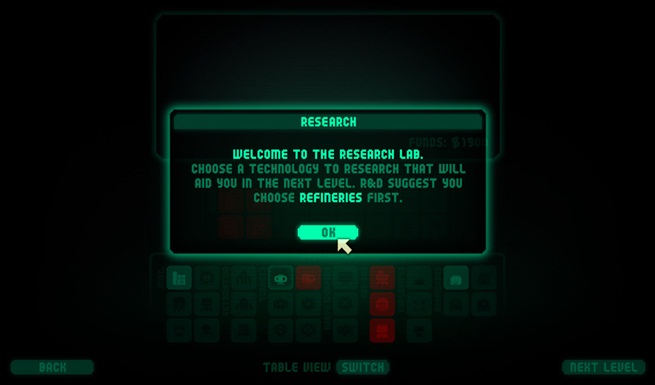 The research adds a sense of progression, but it also makes the game too much of a gamble sometimes

Revenge of the Titans, despite relying heavily upon genre conventions and gaming history references, manages to change enough standard formulas to feel fresh and original. In a climate of low difficulty and hand-holding in the games industry, a truly tough title is satisfying. Be aware if you’re looking for a more forgiving strategy title that Revenge of the Titans won’t be for you however. It’s fun, frantic and, unfortunately, a little unfair from time to time. If you think you can break through these minor niggles, then expect Revenge of the Titans to be a worthy use of your time.

Enemy and turret sprites are very repetitive, Not much diversity between levels, Poorly signposts what tech will be effective in later levels, Very unforgiving, Can get repetitive, Interface isn't especially intuitive

Final Verdict:
GOOD
A more hectic take on the Tower Defence genre, Revenge of the Titans offers a retro styled experience with a highly strategic twist. Addictive gameplay and a cool visual style are not enough to completely mask the game's eclectic balancing and repetitive sprites
A copy of this game was provided by Developer/Publisher/Distributor/PR Agency for review purposes. Click here to know more about our Reviews Policy.