The DS made a name for itself not only because of its massive library spanning every singe genre imaginable, but also because it became a haven for the kinds of games that no longer were economically viable in the retail ecosystem provided by consoles. As they migrated to PC as indie games, and to the consoles as digital only games, on the DS, they were embraced whole heartedly as full fledged retail games, and they often went on to be considered some of the best titles in the handheld’s library. Quirky, off beat games ,with mechanics that wouldn’t find mainstream acceptance on other systems, found life on the DS.

So it’s good to see that similar games have already started making their way to the DS’s successor too. Among the first of these is Sega’s Rhythm Thief and the Emperor’s Treasure, one of Sega’s inaugural efforts on Nintendo’s fledgling new platform, and the latest in a long line of unconventional games, in the same vein as Elite Beat Agents and Professor Layton. 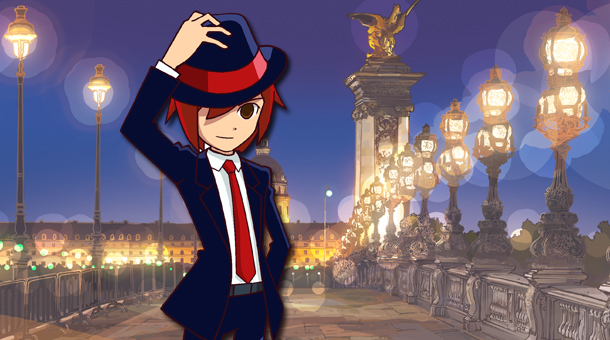 That last comparison is especially pertinent, as Rhythm Thief takes a similar approach to its story, characterization, and its storytelling, with similar high quality, well produced anime sequences that advance the story. Throw in some brief moments of point and click gameplay, and replace the puzzles with the rhythm games, and you have yourself Rhythm Thief.

Playing as Phantom R, the most wanted criminal in Paris, you break into museums, art galleries, and more. However, in keeping with the tradition of villains that like to put on a show, you always warn the authorities first, and then proceed to time your robberies to dance numbers, putting on a spectacle for anyone watching, even as you try to escape in the darkness.

Honestly, the game is better enjoyed as a series of discrete episodes with little to no connection to each other. I say this because even though it has an overarching story, it is generally very silly, and does more to hinder the game, and to take away from it, than it adds to it.

That’s a pity, because like I said, the storytelling itself is exceptionally well done. It is even more of a pity because the core gameplay itself is incredible, taking on some old gameplay mechanics and breathing new life into them by synchronizing them with rhythm minigames. Sneaking, platforming, dancing, fighting, cooking, even minigames involving the 3DS’s gyro sensor, all of which get an interesting new twist added to them because of the rhythm element. 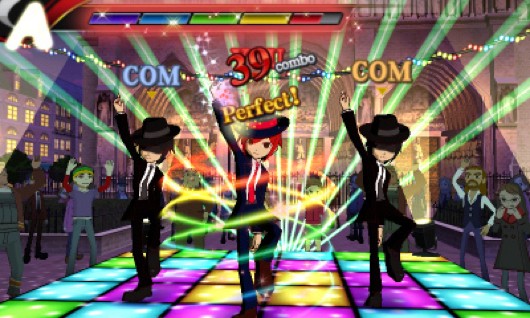 The rhythm challenges are varied enough, so that it never matters when they repeat, and trying to match the beat is difficult enough on its own, though it is never unfair. The button press games, on screen or otherwise, are probably among the best ones, with the stylus based games taking a bit longer to get used to, but in the end, they all contribute to some exceptional rhythm based gameplay, set to some of the best music found on Nintendo’s handheld.

The scoring system in these rhythm segments is harsh, in that a few missed notes can send you down from top rank down to the bottom one. Thankfully, then, you get to ameliorate this by purchasing power ups to make the game a bit easy should you so desire. On the other hand, if you find things going too easy, you can enable a setting that requires you to score a perfect A in each minigame before you can proceed.

Coupled with the point and click content, the rhythm games all add together to give us a pretty long and substantial game, with additional modes outside of the main story mode, should you feel like playing one of the rhythm games without sitting through the story. It’s a well done game, well made, with a compelling gameplay twist, and that unique Sega charm that so many games used to have, but all seem to lack today. All in all, if you are looking for the kind of game on your 3DS that was so prevalent on the original DS, you can’t do better than Rhythm Thief, not for now.

Well made, great presentation, nice variety to the rhythm games, nice mixing of rhythm games with point and click elements, nice soundtrack, a lot of replayibility

Final Verdict:
GOOD
If you are looking for the kind of game on your 3DS that was so prevalent on the original DS, you can’t do better than Rhythm Thief.
A copy of this game was provided by Developer/Publisher/Distributor/PR Agency for review purposes. Click here to know more about our Reviews Policy.