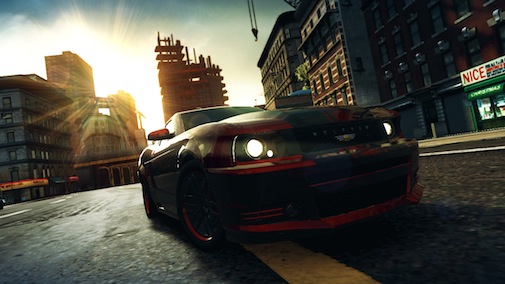 Three weeks ago to the day I wrote a hands-on preview for Ridge Racer Unbounded from a demo build of the game, speculating that this may very well be a surprise hit for this year and boy, I wasn’t wrong. Five years since the last Ridge Racer title, the creatively named Ridge Racer 7 wasn’t a title I had very much time for and indeed was the second Playstation 3 title I told, behind the Jurassic abortion that was Turok. Unbounded is also the first title to be developed by someone other than Namco, whilst still published by them. Bugbear Entertainment have picked up the reigns, bringing the vast swathes of the FlatOut franchise with them.

My main issue with the previous games was the focus on drifting and what I deemed to be a relatively unrewarding driving system, as well as being relentlessly Japanese in its design. In Unbounded, gone are the Bruce Bufferesque title announcer and much of the arcade-inspired interface, instead replaced with a far sleeker menu system fit for a somewhat grittier generation. Gone also is Ridge City, replaced by the appropriately titled Shatter Bay, a far more ‘urban’ environment than in previous titles.

Cars handle in such a way that has made be realise just how unrewarding Burnout Paradise was at drifting; it felt like it was essentially auto-pilot, even the most feeble racer would struggle to fishtail out of the trickiest of corners. Unbounded, however, punishes and rewards the racer in equal and appropriate measure and as such a more nuanced approach must be adopted. Overcooking a corner will have you parked in a shop window or ‘fragged’ -or taken down- by a fellow racer, but if you time a corner just so, you will be greatly rewarded. This isn’t the only example of Unbounded’s fair treatment of the player, it’s a rare example of a racing game not condescending to the player at all. The phrase ‘Do unto others as you would have them do unto you’ sums this up perfectly as you will find yourself fragged and punished in exactly the same way you will to the AI and even the AI can be seen occasionally battling for control over their own vehicles when taking a corner too quickly. 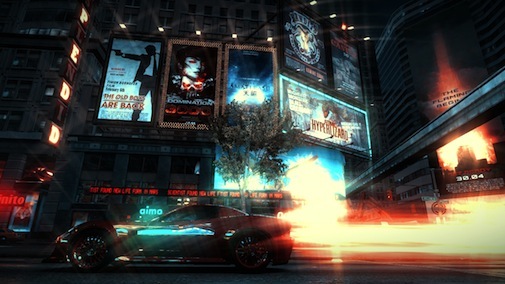 Drifting is rewarded with Rage, a boost-bar which not only gives your car a boot up the arse, it also turns your car into the red guy from Tron and allows you to batter through buildings and carelessly parked explosives in order to accurately recreate Michael Bay’s daily commute. It’s the big new change to the franchise that adds just enough spice to the game to keep it fresh without simply resorting to idle gimmickry, a very welcome change at that.

Aside from your standard racing and ‘domination’ (takedown) game modes, Shindo racing and drifting is also present. Shindo cars lack the ability to burst through time and space but do possess a far stronger boost, as well as being generally quicker and more difficult to handle. The drifting mode is relatively straightforward in the sense that you are rewarded for drifting whilst trying to beat a pre-set time.

The city itself is fairly well realised, if a little bit repetitive, various walls, walkways and buildings are destructible, as well as those which can be destroyed with Rage and by and large, the whole world is fairly sleekly presented, save for a couple of niggles. The interiors to some of the slow-motion set-pieces are a little bland and grey, one ‘nightclub’ had absolutely no decor or furniture in at all. Additionally, when cars are either fragged or dangerously damaged, the fire graphics look decidedly mediocre and in some instances wouldn’t look out of place in the last generation. 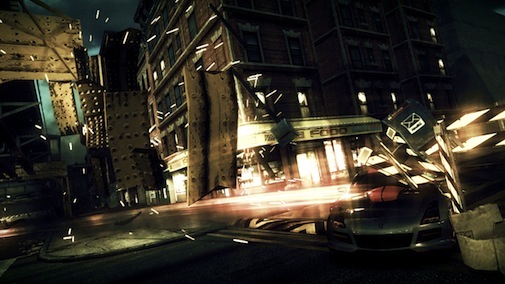 Unfortunately, again we see the removal of local-multiplayer splitscreen, and whilst the online multiplayer is more than proficient, it represents a huge blow for a franchise whose history is almost built upon it, a worrying trend which seeks to destroy all real-life gaming interaction unless it’s with the bloody Kinect, shooing Rabbids down a virtual plughole, or something equally stultifyingly banal.

Whilst the title itself may be cumbersome, Bugbear have clearly taken lessons from Burnout 3 and a plethora of Need for Speed games, it represents a much needed and greatly welcomed paradigm shift for Ridge Racer which will hopefully provide ample competition to a largely underwhelming market.

Once upon a time, Ridge Racer sold the original Playstation. With its then groundbreaking, drift based gameplay, incredibly realistic graphics, unparalleled physics, and endless options, the title quickly became an instant classic, and became a fast killer app for the Playstation. It became that one game that everybody bought, everybody played, but no one quite ever talked about. In the meanwhile, publisher Namco continued churning out the games. And soon enough, it became a sort of a tradition- every time a new system launched, Ridge Racer would be there. It would always be there, always as a launch title.

The franchise has seen better days- now reduced mostly to a meme due to Kaz Hirai’s infamous ‘It’s Ridge Racer!’ during Sony’s E3 2006 presser, with the quality of the games themselves heavily diluted thanks to poor ports with recycled content, and baffling experiments like the DLC heavy Vita launch title, Ridge Racer is completely irrelevant today. Which, for a franchise that used to be as good as this once was, is sad.

To be very fair, this game is absolutely nothing like any Ridge Racer game before it. In fact, down to the branding on its cover and its menu screen, it shares nothing with any of its numerous namesakes- the graphics, look, sound, feel, everything is different. It might as well be an entirely new racer in an entirely new series. It might be the sequel to Spilt/Second we never got. It might be the traditional Burnout games fans have been demanding for years to no avail.

What it isn’t, however, is Ridge Racer.

All the racing takes place in the crowded streets of some downtown metropolitan city- in itself a shift from the previous games. Racing through the streets, players are encouraged to drift and race through the scenery, getting the game’s own version of ‘style points’ (remember Need for Speed Underground?), which fills up a power meter. Use the power meter to smash through the scenery, like a gas station, a truck in the way, a log hut, and create your own way on the road. Make your own shortcuts, try to finish first, even as you try to control your manic car at unbelievable speeds, the landscapes just zipping by, the objects reduced to blurred, colored lines. Weaving in and out of the traffic, since traffic is the one thing that might slow you down, and trying to avoid your fellow racers-

I’m sorry, did I say trying to avoid your fellow racers? My mistake.

Remember the comparison to Burnout? This is where the Burnout portion of this game kicks in.

Fill in your power meter and crash into your fellow racers in spectacular ‘frags’ that would make Criterion blush. Taking down other racers hasn’t been this satisfying since Burnout 3, and this feels like that game’s true successor that we never got. Coupled with the fully destructible environments, and the more focused racing experience that simulates an insane sense of speed, we are left with an incredibly fun arcadey racer that is among the best in its genre.

Except that it is also unfairly difficult.

Ridge Racer Unbounded shares one thing with its forebears- the centrality of the drifting mechanic, even though it is handled very differently in this game. And therein lies the issue. If you try to use the drift button like you did in the previous games, or in any other driving game for that matter, essentially substituting it for a handbreak, then you’re in for a very rough time. No, the drift button is something you always need to have your finger on, jamming it down through every single corner. And this, by itself, ups the fun quotient of the game infinitely.

The problem is, the game never tells you this. It never communicates the fact that the drift mechanic is executed differently in this game, and that if you don’t use it properly, you will lose every single race. There is absolutely no tutorial, you’re dropped head first into the game, down into the deep end, and you’re expected to figure this out yourself. Unfortunately, the game is unforgiving, and this combined with its lack of tutorial can completely turn people off from the racer.

More issues: there is an excellent track editor in the game. Its versatile, its powerful, and once again, its unintuitive, esoteric, and it makes no attempt to explain itself to newcomers. Once you get the hang of it, it’s incredible. It’s just getting the hang of it that’s the tough part, and the game doesn’t make it any easier for you.

It’s a story of incredible potential, all of which is perfectly realized, but never communicated well to anyone. It’s the story of the lone genius, who toils away into the night and makes a groundbreaking discovery, but because of his poor writing and communication skills, can never tell the world about it, and his genius goes unnoticed. Those few who can actually have the patience to sit with the genius- with the game- and look past the eccentricities and the quirks, those few are in, very literally, for a wild ride. All it demands on your part is to forget everything you know so far about racers, and learn it all afresh.

Final Verdict:
SUPERB
Whilst the title itself may be cumbersome, Bugbear have clearly taken lessons from Burnout 3 and a plethora of Need for Speed games, it represents a much needed and greatly welcomed paradigm shift for Ridge Racer which will hopefully provide ample competition to a largely underwhelming market.
A copy of this game was provided by Developer/Publisher/Distributor/PR Agency for review purposes. Click here to know more about our Reviews Policy.