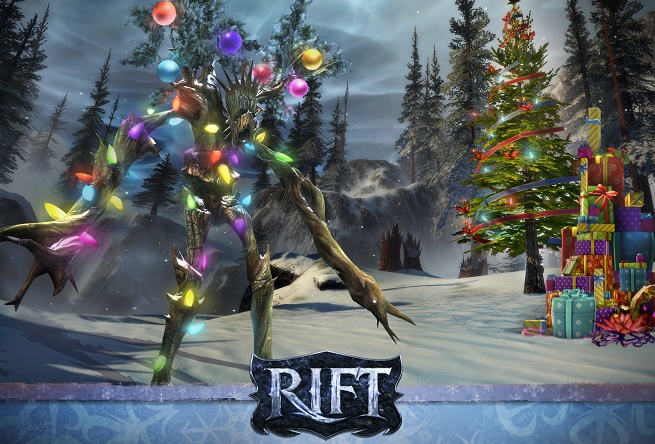 Game Developers and Publishers Trion would like to lend their Holiday Spirit by participating in this online giveaway where five lucky winners will get a copy of the game Rift. No matter what holiday you celebrate you are eligible to win Trion’s Rift-mas Giveaway. Although Rift was released earlier this year during March it is still one amazing fantasy MMORPG. The contest is only eligible to residents of the U.S. and Canada.

All you have to do to enter the give away is comment what class you would play as in the game. Once the Holidays drift away, we will them randomly pick 5 lucky winners to receive the fantasy MMORPG, Rift for the PC. There are four classes being Warrior, Cleric, Rogue and Mage with each of those classes having sub classes. To help you decide here are descriptions of each class along with their subclasses straight from the official site.

Warrior
Weapons, tactics, and combat are the mainstays of a Warrior’s life. Both the barbarian raiding a village and the knight commanding a column of troops adhere to the tenets of discipline, personal combat, and martial training. Every Warrior knows how to fight in close quarters, to take a blow and deliver a mortal wound in return. As the elemental forces have closed around Telara, a growing number of Warriors have incorporated magical techniques into their martial styles.

Warriors excel as lone combatants or within a larger force, depending upon what fighting styles they have mastered or choose to employ. Warriors as a Calling have no shared ethos or background, but their training, mastery of weapons, and enduring nature unite them in spirit. The noble barbarian and corrupt knight meet as equals on the battlefield.

Gameplay
Front-line combatants without peer, Warriors reliably make up the core of any fighting force. These hardened and disciplined fighters never falter, and can be counted on to protect those weaker than themselves. But virtue is not a defining characteristic. Many Warriors conceal sinister motives, every battle a chance to slake their bloodlust.

A Warrior knows that the key to victory is to outlast one’s foe, carefully waiting for the opportune moment to mount a devastating assault. To this end, Warriors will spend decades training their bodies, building up a reservoir of power to see them through any fight.

Equipment
Warriors are melee fighters who rely on heavy plate armor for protection as they close with their opponents. Many augment their armor with large, sturdy shields built to deflect even the fiercest blow. Others forgo this extra protection, wielding massive axes, swords, and glaives to cut a swath through their enemies.

Cleric
Telara’s original wielders of magic gained their powers through pacts with minor elemental spirits. Through devoted study, these Clerics reached out to ever-more-powerful beings, soon communing with demons, faeries, and gods. These holy men and women founded a number of spiritual disciplines: some focused tightly on a narrow ethos, while others retained more free-form theological allegiances.

Although those who take up this calling boast extensive knowledge and keen intellect, Clerics value wisdom and faith above all else. Intensely focused, a Cleric tackles any endeavor secure in the support of powerful beings incomprehensible to the layman. These beings’ exact nature depends upon each Cleric’s culture of origin and spiritual training regimen.

Gameplay
Clerics are renowned for their powerful support magic, able to repair the most grievous injuries or cure the deadliest diseases. The spells at a Cleric’s command are as varied as the patron deities they follow. Many Clerics are also capable combatants who rain divine wrath from afar, or wade into the thick of battle, warhammer swinging.

Clerics fuel their spells with the arcane energy known as mana. Granted by their patron deity, a Cleric’s pool of mana is not limitless and must be carefully managed, lest the Cleric deplete his reserves in a crisis.

Equipment
The militant orders gird themselves in chainmail, and march into close combat wielding heavy, two-handed warhammers, or a simple combination of mace and shield. The more arcane priesthoods, meanwhile, wear cloth vestments, brandishing symbols of spiritual power such as staves, tomes, and totems.

Rogue
The history of martial combat stretches back to the earliest days of Telara, when war was a brutal, messy, simple affair. This, as any Rogue will tell you, was the heyday of the Warrior. Their own tradition began much later, after people learned to fight with their minds as well as their muscles.

The arts of the Rogue are handed down by many different masters, each of whom developed unique forms and techniques. All Rogues are sophisticated combatants and dynamic thinkers, who utilize every available tool to skew the battlefield to their advantage. In the cities, Rogues learned to use shadow and cover to catch their targets unaware. Other Rogues learned the secrets of the wild, taming savage beasts and brewing poisons from the flora. Still others gained mastery over the arcane to enhance their weapons and attacks.

Gameplay
Rogues are most at home skulking around the edges of battle, waiting for the perfect moment to strike with overwhelming force and minimal chance of counterstrike. They excel at tasks requiring a quick mind and quicker blade, such as dueling, scouting, and assassination. Not all Rogues live in the shadows. Many are simply loners, at home on the edges of society, mastering the arts of hunting and animal husbandry to survive.

An expert at hit-and-run tactics, a Rogue relies on quick bursts of energy to fuel dazzling combination attacks that cripple and maim, leaving opponents open for lethal finishing maneuvers.

Equipment
Rogues prefer simple leather armor, leaving them unencumbered to move stealthily and make swift escapes. In close combat, a Rogue wields a light-weight sword or dagger in each hand. Never the sort to give up an advantage, many Rogues have also mastered the art of ranged combat with bows and firearms.

Mage
Since the dawn of time, spirits, creatures, and eruptions of energy from the elemental planes have shaped Telara in profound ways. Mortals watched planewalkers call forth elemental power, and gleaned from their techniques the basics of arcane magic. Through research and experimentation, the ancient Mages learned to control the elements without pledging themselves to any gods or minor spirits. After mastering broad elemental incantations, Mages focused their studies on individual elements, tapping the potential of primal forces controlled by a skilled hand.

Magical study is no solitary affair. Mages gather to share their arts and research, and arcane schools have risen and fallen throughout Telara’s history. The two greatest schools still in existence are Quicksilver College, where Mathosian students come to study under ancient Elven masters; and the new academy in the stronghold of Meridian, where Defiant scholars accumulate the recovered knowledge of the Eth.

Gameplay
Devastating long-range combatants, the arcane powers Mages wield can tear through any opponent, regardless of armor. While Mages are renowned as a fearsome offensive force on the field of battle, a number of orders specialize in potent support and healing magic as well.

A Mage must carefully manage the arcane energies they draw from the planes to power their spells. With each spell cast, excess planar energies seep into Telara, building a charge around the Mage, who can let this excess energy bleed off over time, or harness it for even greater power.

Equipment
The art of weaving magic does not favor heavy armors that distract the senses and restrict movement. Though the Mage’s traditional light cloth robes leave their bodies vulnerable, their mind is their true bulwark. Mages employ a variety of arcane items such as staves, wands, tomes, and totems to focus their spell-casting. In addition, many Mages protect themselves in close combat with a simple edged weapon such as a dagger or short sword.