RiMS Racing strikes its own chord but quickly loses its lead.

Given that the developer Milestone’s motorcycle racing games have been running roughshod on that genre for the past several years it shouldn’t be too surprising that a rival would eventually surface. Is Raceward Studio that rival? Is RiMS Racing a worthy challenger to Milestone’s litany of modern simulation motorcycle games? Well, it depends. If you are looking for a motorcycle racing game that surpasses the rest of them in terms of playability, track variation, or superior physics, then probably not. But if you want a different flavor of that sort of game with a huge emphasis on absurdly deep customization, then RiMS Racing might be worth a look.

"Is RiMS Racing a worthy challenger to Milestone’s litany of modern simulation motorcycle games? If you are looking for a motorcycle racing game that surpasses the rest of them in terms of playability, track variation, or superior physics, then probably not. But if you want a different flavor of that sort of game with a huge emphasis on absurdly deep customization, then RiMS Racing might be worth a look."

RiMS Racing is, to its a core, a completely unapologetic simulation motorcycle game firmly rooted in the philosophies of realism and control over accessibility. Turning, speeding up, slowing down and passing other racers can all end horribly if you aren’t precisely on the money with everything you do. The only real olive branches it extends to the inexperienced is an easier difficulty level and the color-coded arrows that illustrate the ideal placement and speed of your bike. The fact that they turn yellow then red as a way of warning you to slow down is about as generous as the moment to moment racing gets in RiMS Racing, but if you’re a member of the hardcore audience the game is aimed at, odds are, that will be just fine with you. Racing is, on top of being notably difficult, also a bit touchy.

Ending up in the grass or gravel outside of a track seems far more likely to result in a crash than other similar games, and even grazing a guardrail at relatively conservative speeds can send you flying off your bike like you just hit a concrete wall – even though you didn’t. There doesn’t seem to be much middle ground in RiMS Racing when it comes to whether or not you completely wipe out from mistakes. You either survive the situation relatively unscathed and with no penalty or you’re completely launched off of your bike and risk having the rest of the race ruined. To me this seemed a little bit outside of the bounds of reasonable difficulty and more so just felt like unfairness resulting from lack of nuance – which is not a good thing you want to see in a game that so heavily leans into the simulation style. I also noticed that the opponents would often just straight up ram into the back of my bike regardless of what performance level I set them to. This didn’t always result in a crash but it is rather odd as other games in this genre don’t seem to have that happen nearly as much.

Where RiMS Racing absolutely nails it however is in the insane amount of customization that you can dive into with any one of the game’s 8 bikes. Just within the brake system, you can swap out different calipers, pads, discs, levers, cables, fluids and more, all with multiple options that really let you meticulously craft your very own finely tuned bike. Your bike’s exhaust system, air filters, chain, and other points of interest are all fleshed out in similar fashion. I can’t say for sure if they are the first game ever to go this far, but I can say that I have not played anything else that does. Much of this is swapping out is done with quick time events that usually require a combination input of the left stick and a face button to remove old parts and install new ones, which I personally found to be rather tedious, but I can also definitely see how a big time gear head might get a kick out of it. With all of this customization only expanding as you progress through the rather lengthy career mode, you’ll quickly forget that the game only has 8 bikes, as you can ultimately create a nearly infinite number of versions of those bikes. So where some might be turned off by that small roster, I implore you to just look for that variety within the game’s deeper systems for each bike, and I suspect you’ll be more than satisfied. 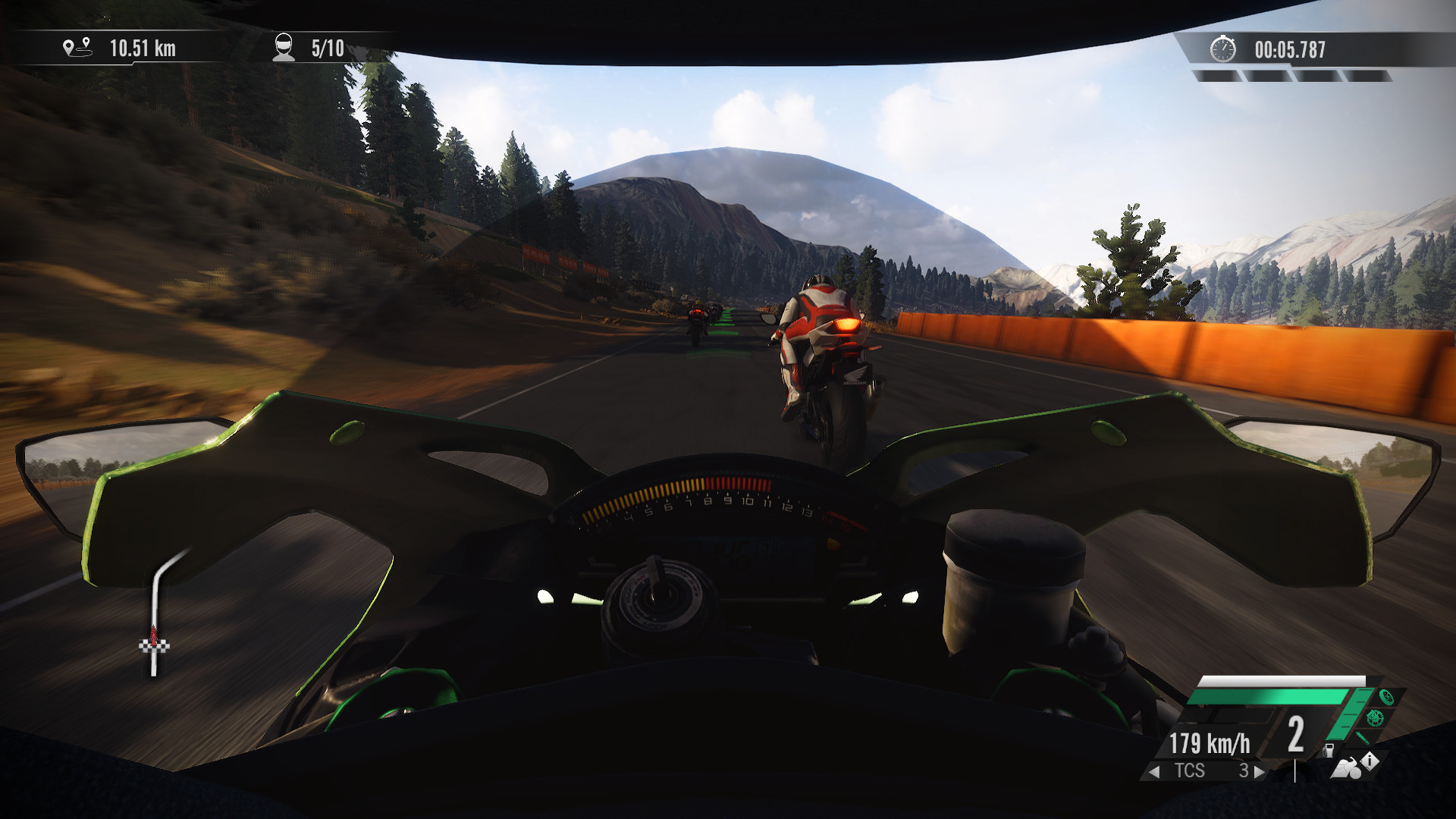 "Opponents would often just straight up ram into the back of my bike regardless of what performance level I set them to. This didn’t always result in a crash but it is rather odd as other games in this genre don’t seem to have that happen nearly as much."

The only issue with this amount of customization is that you can easily find yourself spending more time several layers deep in those menus than actually being on the track racing, which isn’t uncommon for games like this at first because you want to find the set up that works best for you, but with this wealth of things to tinker with, you may never really feel done. So, depending on the type of racing fan you happen to be, that could either be a delight or a detriment to your experience. Especially considering that the game already has a rather vast array of tutorials that it wants you to explore before even really getting started at all. A nice list of presets with emphasis in certain areas would have been a satisfactory way to mitigate menu overload, but as it is, it’s certainly not a game for those with limited free time. It also doesn’t help that navigating through these menus is often overly intricate. I understand that’s going to be a natural byproduct of this many options but even still, you may want to leave a trail of breadcrumbs to find your way back out of them. Still, you’ll want to get familiar with them as quickly as possible, as you will be replacing parts often from wear and tear regardless of how aggressive you want to be with upgrades.

Overall, the visual presentation of RiMS Racing is fairly mixed. While the bikes and riders look pretty good, the tracks themselves are fairly mediocre for 2021, and at times feels below that with fairly constant texture popping at even medium distances, generic looking weather effects, and a serious lack of visual variety in the tracks themselves. Great Victoria Desert Road and Passo San Marco are stand-outs, but for the most part I found myself getting pretty tired of most of the scenery by the second or third lap. Granted there’s only so many different ways a street track can look but a few variations – even just some different times of day would have gone a long way here. Most egregious is the stuttering and frame rate drops that seem to occur most often during rain and when you’re in the midst of other riders – so in other words, RiMS Racing most often loses its stability right when you need it the most. This is pretty unforgivable for a game like this as it can – and will – lead to more crashes and thus more losses. Your patience for this sort of thing might vary, but there is no way it can be ignored. At least in the PS4 Pro version that I played for review.

Outside of the main campaign there are single races that you can customize with an oddly small number of parameters for a game with this much of an emphasis on bike customization. You do have some simple weather effects to choose from and some asphalt variation but most of the weather effects exacerbate performance issues and the asphalt differences don’t really change things as much as you might think. There is also a pretty basic multiplayer mode as well, so you do have a couple of nice ways to stretch your legs outside of the career mode, but nothing to write home about.

The sound in RiMS Racing is pretty convincing most of the time. Different bikes sound distinct and while I am not a fan of the hyperactive EDM music they’ve chosen for the soundtrack, I can appreciate the levity it brings to the races. 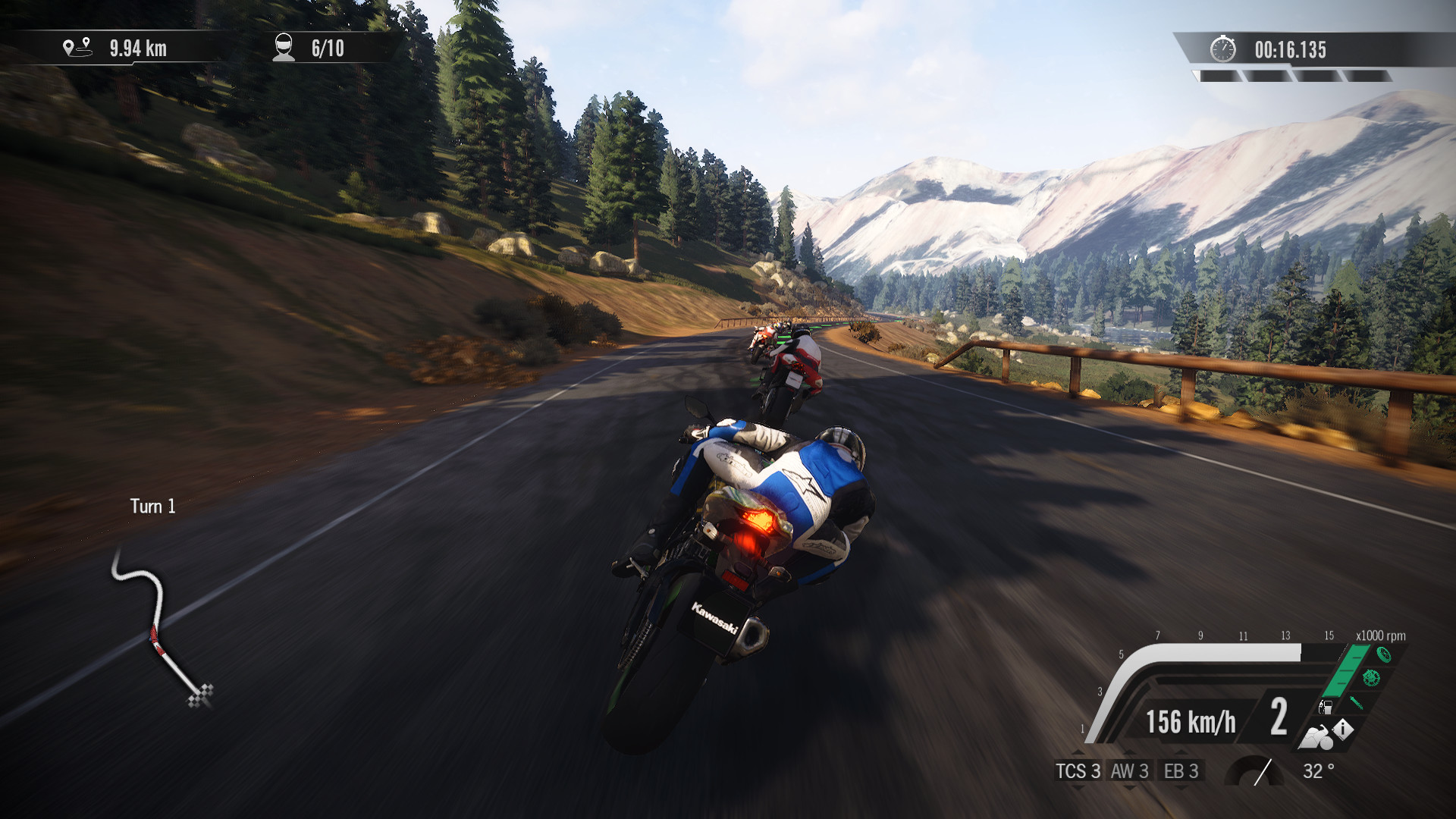 "The visual presentation of RiMS is fairly mixed. While the bikes and riders look pretty good, the tracks themselves are fairly mediocre for 2021, and at times feels below that with fairly constant texture popping at even medium distances, generic looking weather effects, and a serious lack of visual variety in the tracks themselves."

RiMS Racing is an interesting proof of concept for a new sort of motorcycle racing game. The insanely deep customization and competent career mode do make it a worthy addition to any motorcycle fan’s library. But a sizable handful of unpolished bits, lackluster presentation, and insufficient optimization that can sometimes fall into truly problematic territory do keep it from being the challenge to the status quo that it so badly wants to be. RiMS Racing earns a fair amount of credibility with how well it gives the player complete agency over their bike, but a lot of that credibility is wiped out with underwhelming opponent AI, mediocre track variety, and shabby optimization. These things simply introduce a level of chaos that too often flies in the face of the control that RiMS Racing wants you to feel like you have. I can certainly see it resonating with a very specific group of customization fanatics, though it is a bit harder to recommend to everyone else.

Final Verdict:
FAIR
RiMS Racing makes an honorable attempt at raising the bar for customization but it comes at the cost of nearly everything else.
A copy of this game was provided by Developer/Publisher/Distributor/PR Agency for review purposes. Click here to know more about our Reviews Policy.