Rocket League is unlike anything that is available on the market right now.

Posted By Oliver VanDervoort | On 03rd, Mar. 2016 Under Article, Reviews

While Rocket League was released on the PlaSstation 4 several months ago, the game has just arrived on the Xbox One and now that it’s here, Microsoft players are able to enjoy this game as much as PS4 players have for so long. For those who don’t know exactly what the game entails, the concept is simple. Have you ever wanted to play soccer, only didn’t want to have to get out of your car to do it? This game allows you to live out that dream.

The game features cars of various size and shape which are all zooming around a giant playing field and knocking around a giant soccer ball, attempting to knock that ball into their opponent’s’ goal. This is indeed soccer, with cars. While that might sound like a rather simplistic game that doesn’t offer much in the way of replayability, the developer has managed to find lightning in a bottle when it comes to their offering.

"The customization of the cars is certainly a really interesting part of the game, especially when you can do things like put a “birthday cake” topper on your vehicle to really make it stand out from the crowd."

The garage is where I got to pick out what kind of car I wanted, knowing full well that I didn’t have to stick to that car for any length of time if I didn’t want to. When starting out the game, there are a number of different kinds of cars to choose from, but players can earn more as they play along and accomplished various tasks in the game modes.

Even when you will have the bare minimum of different machines to choose from, you will still be able to put your own spin on it. All of the different decoration options actually abide by the same rules in that there are a few available the first time the game is booted up and then more and more unlock as you keep playing the game.

For the most part, all of the teams in the game are divided up into either the Blue Team or the Orange Team. When you get into the season mode of the game, there are too many teams to stick to those colors so you get a mix, such as purple or brown but the online and exhibition modes all manage to stick pretty close to blue and orange and their respective offshoots. The customization of the cars is certainly a really interesting part of the game, especially when you can do things like put a “birthday cake” topper on your vehicle to really make it stand out from the crowd. The better part, of course, is actually taking the car out on the field. 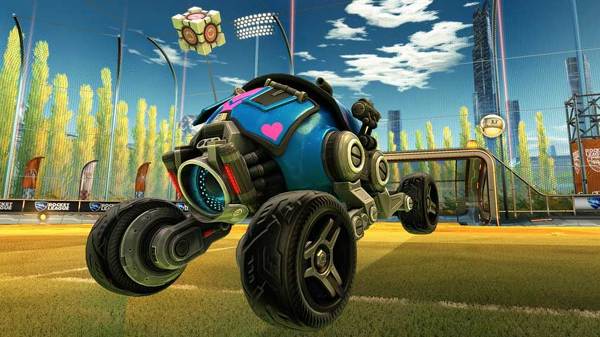 "I loved every minute of the online multiplayer aspect of Rocket League. Even when the team I was playing on was getting its butt kicked I managed to get fired up and could actually feel the adrenaline rush pump through me."

This is also where the game really separates itself. Players will love every minute of the online multiplayer aspect of Rocket League. Even when the team I was playing on was getting its butt kicked I managed to get fired up and could actually feel the adrenaline rush pump through me. This game isn’t like an EA Sports game, promising that “if it’s in the game, it’s in the game”, but the fast paced action and the fact that the games are pretty short got me into the mood pretty quickly. After one 45 minute session, when I set the controller down to take a break, I realized I had pretty obviously been staring wide eyed at the screen for most of the time.

Players are able to choose between teams of two, three, four or one-on-one, but I always preferred three against three. I also soon found that while I got better controlling my car as I played, I enjoyed hanging back from the action and playing the defender/enforcer role. That’s not to say I didn’t enjoy taking a shot on goal from time to time. There was one shot in particular that actually got me out of my chair, when I bounced it off the side netting and it rolled all the way around and then into the goal. This half-field shot was equal parts luck and impressive skill.

"Overall, Rocket League is a fantastic experience and is completely unlike anything on the market right now."

Those kinds of shots are actually quite difficult, especially when there are six cars on the field because everyone is zooming to and fro and even the smallest bump of the car can set the ball off course.

Playing against the AI in this game leaves something to be desired and is the only thing that deters the experience. Even at the highest difficulty rating, there’s just no way for the AI to recreate the chaos on the field that a player can experience when they are going up against human opponents. I won my first couple of games in the league by ridiculous scores considering the match was only five minutes long. This works when players are looking for a little practice but owning the AI over and over isn’t fun when I’m out there getting owned by other human players. Having said that, it’s the only negative in a game that otherwise scratched an itch I didn’t even know I had.

Overall, Rocket League is a fantastic experience and is completely unlike anything on the market right now. Now if you’ll excuse me I’m about to go get my hat handed to me in yet another online match.

Graphics are sharp, the game is fast paced and fun, the games are short which adds to the replayability factor.

The AI leaves something to be desired.

Rocket League made a lot of waves when it was first released on the PS4. Considering this Xbox One version has some add-ons packed in, it is, at the very least just as good if not just a touch better.

A copy of this game was provided by developer/publisher for review purposes. Click here to know more about our Reviews Policy.
Tagged With: pc, ps4, rocket league, Xbox One