Growing up in the 90s I can remember playing Castlevania and Castlevania III: Dracula’s Curse for hours in the living room. I didn’t know why at the time, but something about them just clicked with me. Those were hard games, but they never seemed unfair because I always felt like I was getting better with each run. They demanded that the player learn their intricacies and apply them all the while allowing enough room for mistakes as to teach you what you did wrong. Rogue Legacy is a game that understands that balance and remains one of the few retro-inspired indie games to pull it off.

Rogue Legacy is a rogue-lite game which means that character death is permanent and the dungeon changes each time you re-enter. Equipment carries over to the next playthrough, however gold collected must be either spent or forfeited before entering the dungeon again. Gold is used to upgrade your estate in the form of permanent stat bonuses, class upgrades, and shop enhancements. The goal in each run early on is to gain enough gold to be able to purchase some of these things and improve your chance of success next time.This makes for an interesting mechanic in that if you have a bad run, you won’t be able to improve anything for your next one, so there is an inherent encouragement to getting better at the game. You can later upgrade your estate to make the percentage gold forfeited lower, but it is never really enough to matter. 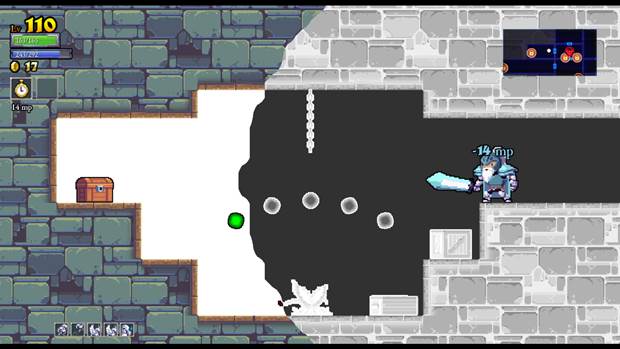 " Equipment carries over to the next playthrough, however gold collected must be either spent or forfeited before entering the dungeon again. "

Every time you die you get to choose between 3 random “Heirs” to play as, each with different classes, skills, traits, and stats. Classes are mostly similar outside of base stats until they are upgraded to their second levels, in which case they gain specific abilities that differentiate them more. Stat differences can include more MP for Mages, better defense for Knights, etc. As you upgrade your estate you can unlock new classes that will be added to the pool of randomized heirs.

Traits are specific characteristics of your heir, and they will often be unique and quirky. For instance when your character has the vertigo trait, the game must be played completely upside-down. Or when your character has gigantism, they are twice the size of a normal heir. There are many of these traits and they are randomly inherited. Some can be a hindrance like vertigo, or some can be like gigantism, which gains a strength stat bonus and the chance to knock enemies back. It will become prudent to know which traits you want to look for or avoid when choosing an heir, as some will be better suited to certain tasks than others.

As I mentioned before the castle layout will also be different every time you parish. You may occasionally get a bad roll and have your first room be filled with enemies just waiting to serve up a quick death. This randomization keeps each run fresh as you won’t know what to expect when you enter. In the first room of the dungeon there will always be a portal, final boss door, and a roughly sketched map. The map isn’t completely accurate however, as it only shows the general direction in which the different areas may lay. These areas correspond with one of the 4 bosses you must defeat before entering the final boss door. 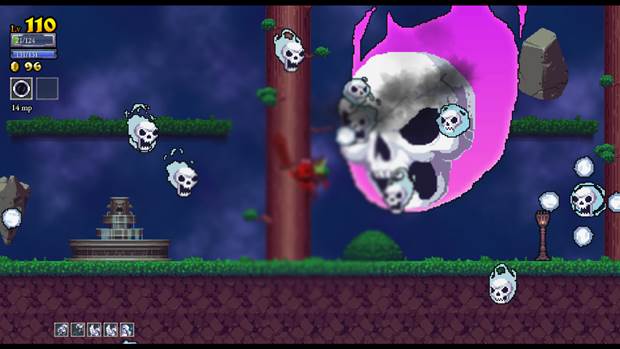 " You may occasionally get a bad roll and have your first room be filled with enemies just waiting to serve up a quick death. "

The path you must take to get to each of these areas will be different every time, as well as the rooms within. If you unlock the architect at your estate you can choose to keep your previous castle layout in exchange for gaining less gold than you did before. This is useful when unlocking portals right before boss encounters, which you will use the portal in the first room to get to quickly. I often found myself speeding through trying to find these portals before dying just so I could come back with a character at full health and better stats in order to properly fight the boss.

The base controls are extremely tight. The jumping arcs, the sword swinging, and the magic/sub-weapon usage all feel precise, and your character does exactly what you expect them to do when a button is pressed. Depending on stats and classes there can be small variances (For instance the unlockable Shinobi class has a much faster movement speed than the others) but overall they never hinder how the game feels. Most of the movement enhancements will come from runes collected in the dungeon and applied to armor, such as dashing, double/triple jumping, and flying. This adds a layer of customization to the game, and will help you choose the play style that’s best for you. 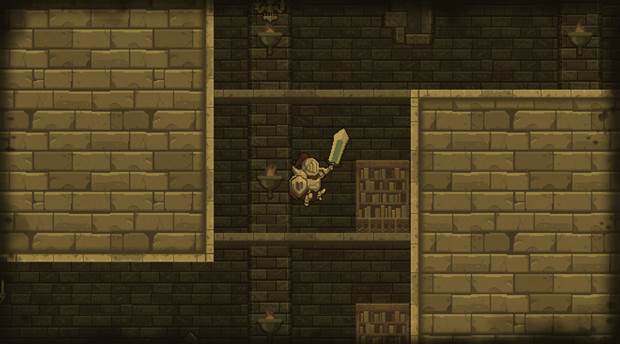 " The jumping arcs, the sword swinging, and the magic/sub-weapon usage all feel precise, and your character does exactly what you expect them to do when a button is pressed. "

As an added bonus, when you buy the Playstation 4 version of the game, you get complimentary Playstation VITA and Playstation 3 versions as part of Sony’s Cross-Buy system. These versions are pretty much the same game at a lower resolution, and in the PS3’s case, lower frame-rate. Like most Cross-Buy games, Rogue Legacy also features a persistent cloud save of your progress ensuring that no matter which system you are playing on, you always have access to your playthrough.

Ultimately Rogue Legacy is a worthy addition to the revival of sidescrolling action games that indie development has ushered in. This modernized take on rogue-lites is easily accessible with simple to learn/difficult to master controls and concepts. If you are looking for a challenging sidescroller with interesting enemies, meaningful character growth, and a quirky sense of humor, you can’t go wrong with Rogue Legacy.

Tight controls. Endless combinations of enemy, character and castle layouts. Accomplishments are meaningful, and satisfying. Cross-buy/Cross-save means you can play the game on PS4/PSVITA/PS3 at any given time.

Stats and Traits could have clearer explanations before choosing an Heir.

Final Verdict:
EDITOR’S CHOICE
Although it may seem like a daunting task at first, navigating this enormous castle and defeating the enemies within is a challenging and satisfying adventure often missing from modern games. Learning and mastering the controls while your character gets incrementally stronger will make you want to spend hours trying to get just a little bit further until can take on the bosses. Whether you have nostalgia for retro games, or are just curious about them, Rogue Legacy is a perfect entry point for newcomers.
A copy of this game was provided by Developer/Publisher/Distributor/PR Agency for review purposes. Click here to know more about our Reviews Policy.