The third installment in the Saints Row franchise is here, Saints Row: The Third, making it a trilogy now. The game aims for over the top sandbox style fun and it certainly hits its goal in that sense.  At the same time the story is action packed, and you can never guess what’s going to happen next, but it is always something that the Saints can handle in the new City of Steelport. As the game begins you find yourself robbing a bank in one epic hell of a way until everything goes wrong until you eventually find yourself free falling from a plane dodging parts from the plane itself, while you are fighting off other free falling enemies at the same time. You finally parachute down into Steelport only to find that the major crime syndicate has taken everything away from the Saints, drowned their bank accounts and have brought them down to the bottom of the food chain.

Of course this is where the premise of the story really begins, as you must make your way back to the top. Gain money by various ways, purchase properties, unlocking new weapons and taking on the three other gangs holding territory that stand in your way from owning Steelport. Right away in the first real mission of the game, I was pleased to find my character singing along to Sublimes, ‘What I Got’ which is a song that everyone knows and with it not bring me back to times of the past, it was funny to here him making up his own words like we all do. In addition it was just a taste of possibly one of the best all around soundtracks I have heard in a game. You will hear anything from Sublime to Kanye West to Deadmau5 to classic ’80s hits. To top it off you can actually go through each radio station, viewing each song they play and make your own mix tape from all the tracks in the game that you can listen to whenever your in a vehicle of course. 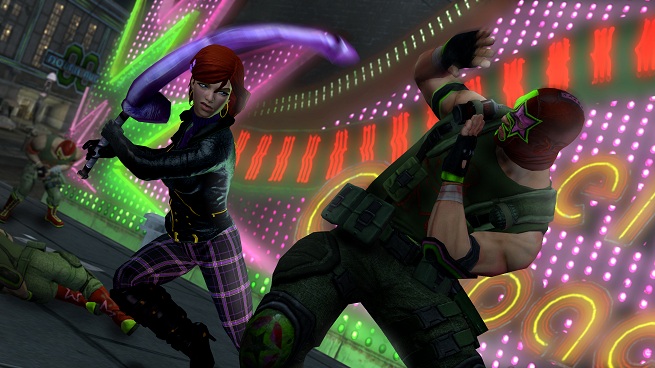 Be afraid… be very afraid.

The gameplay is just amazing in Saints Row The Third. You can quickly steal a car by jumping feet first through the drivers side, or even the front windshield, kicking the person out of the car, which is not only convenient but looks way cooler than opening the door and pulling the driver out (which you still have the option of doing). Volition have really done a spectacular job with the game making it fun but adding features like all the different upgrades you can purchase. Whether you are upgrading a weapon to giving yourself more time to sprint, the list goes on. As you progress through the game you will start to own different and bigger homes, with you second being a nice little penthouse a top a building with a swimming pool to garnish the patio. You also have a garage at every single one of you homes, and this is great because any car that you customize in a shop is automatically put into your virtual garage. You can then customize it further from any of your home or have it delivered right to your home. Eventually you will be able to have things delivered to you where ever you are.

You can see the similarities the game has with GTA but Saints Row The Third takes things a step further. When you start you can customize your character from your cheek bones down to their sex appeal and of course the game is notorious for its crazy outfits, whether it’s Bondage or a giant Teddy Bear. You can also stop by plastic surgery clinic to change your physical appearance after the start of the game as well as finding new outfits, jewelry, and accessories depending on what store you walk into to change. The customization is nearly endless giving you the ability to look serious or as ridiculous as ever and unlike GTA, the entire campaign can be played in co-op, so it is interesting to see what another player looks like when you join up with them. 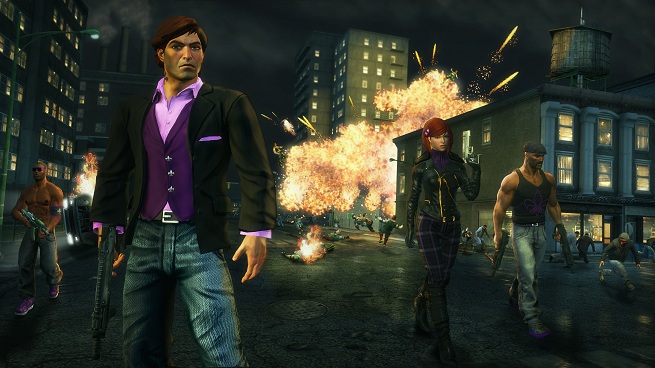 It’s good to be a Saint

Respect is gained for just about everything you do in the game from buying new clothes to completing mission and acts as a kind of experience point system if you will. That along with control and cash will have you running the city of Steelport in no time. One of the best ways to attain cash are to purchase properties and you are rewarded cash for every mission you do as well. There are even perks which you can purchase that make people drop more cash one killed and give you an instant pickpocket just by bumping into them. The story is actually pretty good in the game, it may not be the best storyline I have ever seen but Saints Row The Third is much more about the experience and having fun through out the campaign. Every mission is different as you might have one that is practically a cut scene where another may be long and involving you to kill hundreds of people. Luckily the latter is seen more often and you might be fending off the cops along with one of the three other gangs at the same time during a mission, but fortunately the game lets you go about mission in your own way.

You fly jets in the game, shoot little mind controlling octopuses on people brains (if you pre-ordered it), bring a Helicopter to a gun fight or even call in a team of AI re-enforcements. Saints Row The Third does a fantastic job of keep you tied to your seat with almost every moment action packed. When you are not reeking havoc, you can enjoy the more humorous side of the game like beating people do death with a giant purple dildo bat or completing one of the games challenges, like running over crowds of people on the side walk… oh wait, that’s still reeking havoc. Challenges are just another part of the the side missions, as there are Assassination missions and Car Theft mission too. This all ensures that you are never bored and there is always something to do. 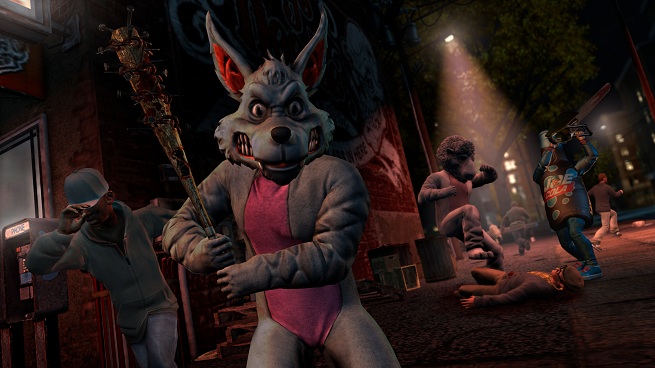 On top of the campaign which has two different endings, which could have been better, but you kind of just want to get back to smashing people with the power fists. There is ‘Whored’ mode which you can play with a friend as well as will have you face waves of enemies that can range from gangsters to Professor Genkis and other ridiculous enemies. Each wave provides you with a weapon and a unique kind of round, like killing masochists or Mistress’s bitches (whatever you want to call them) with a giant dildo. Each round will have you doing over the top and have you laughing while you fighting for your life, but actually it is not that hard to complete the 30 waves, it is more of a fun added mode that you can play on different maps as different characters. Downloadable content is already on the way so this game should be a purchase for anyone who likes to have fun and can stand a little perverted humor, which in today’s age, is quite frankly rather common.

Nearly endless and humorous character customization. Vehicle customization. Action packed moments, scenes and stunts that will have you asking yourself if this is really happening. Play the whole game in co-op.

The ending of the story could have been better. 'Whored' mode which can be played in co-op is a nice addition but I feel they could have done more with it.

Final Verdict:
SUPERB
Saints Row The Third takes fun to a whole different level between pure action and perverse humor, there is never a dull moment. It blows any other console sandbox game out of the water.
A copy of this game was provided by Developer/Publisher/Distributor/PR Agency for review purposes. Click here to know more about our Reviews Policy.