Nintendo has been taking the digital market seriously lately. After the monumental failures that were WiiWare and DSiWare, they promised something better for their digital offerings on the 3DS, and so far, they’ve delivered excellently, as epitomized by games like Pushmo, and their clear intent and focus on pushing the eShop as hard as they can. Over the past few months, the eShop has had a steady stream of some great, must have games at accessible prices, and Nintendo’s Sakura Samurai is yet another addition to an already stellar eShop lineup. 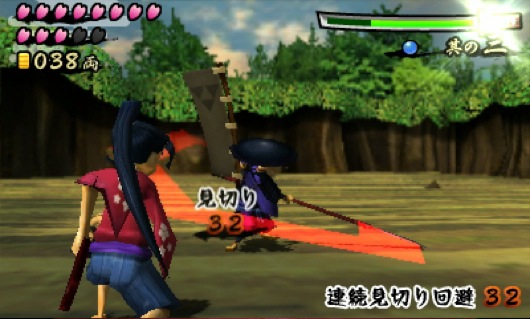 Unlike previous hits such as Pushmo or Zen Pinball 3D, Sakura Samurai isn’t content on offering a small, pocket sized game experience. Rather, it is, on the whole, a full sized adventure, specifically made to fit the portable nature of gaming that the 3DS so espouses. Sakura Samurai is a meaty action game that tasks you with- say it with me- saving the princess.

But if you play the game for its story or setup, you’re doing it wrong. The game’s overarching plot thematic might be generic, but its treatment of said story, as well as its characters, is anything but. The game’s distinct visual style, which I suppose can be best described as a polygonal Okami presented in stereoscopic 3D, brings each villager and each NPC to life. in typical Nintendo fashion, each character has a lot to say, and each character has his or her own unique quirks. The NPCs are all memorable, and they further accentuate the true heroes of the game- the locales and the environments.

Seriously, Sakura Samurai features some breathtaking locales, and they’re as good as they are thanks to the game’s charming, stylish visual flair. The entire thing looks like a 3D Japanese painting come to life, and while the villages are memorable, more memorable still are the distant mountains and the rivers and the castles. Sakura Samurai will have you traveling to thirty segmented areas of the map, and there is some breathtaking variety to be experienced. The game provides you with plenty of incentives to visit each of these, as completing each area lends you a health bonus. 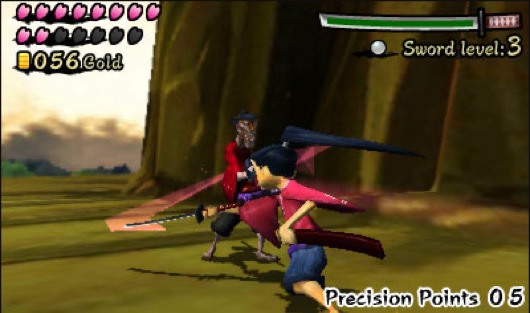 As varied as the locales are the enemies, and you’ll fight everything from ninjas and archers to your regular grunts, and each of these will have their trademark Nintendo quirks (such as the ninjas vanishing in a puff of smoke). Fighting the enemies themselves is fairly easy- attack with A, block with B, parry blows with L or R. Press X to enter a ‘free movement mode,’ although this is generally cumbersome, and it makes you more vulnerable. The enemies all have varied techniques, ensuring that combat itself never becomes repetitive, and especially in bite sized chunks, that the game remains a thrill to play.

Sakura Samurai may be a downloadable game, but it has no dearth of content. There is the main story mode, the completion of which unlocks a harder difficulty level; there’s an arena mode, which has you taking on thugs in the shortest possible time; there’s even the game’s own interpretation of the 3DS’s built in pedometer, which has you tending a garden by dedicating your footsteps to the growth of the garden. Or something. 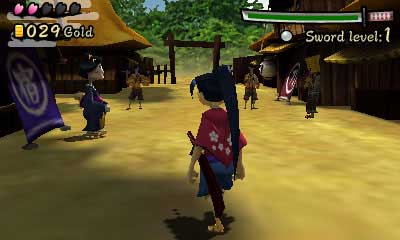 All of this is supplemented by great graphics, and, again, as is expected of a Nintendo product, a stellar soundtrack. The music in the game is great, and it augments the game’s excellent and charming visuals, and lends even further depth- literal and otherwise- to the environments, to the combat, and to the characters. Sakura Samurai is an excellent game, and at its extremely low price of admission, it’s more than a bargain, it’s a steal. Every 3DS owner owes it to him or herself to download this off the eShop immediately.

The game is made for bite sized chunks; combat might get repetitive in extended play sessions

Final Verdict:
SUPERB
Sakura Samurai is an excellent game, and at its extremely low price of admission, it's more than a bargain, it's a steal. Every 3DS owner owes it to him or herself to download this off the eShop immediately.
A copy of this game was provided by Developer/Publisher/Distributor/PR Agency for review purposes. Click here to know more about our Reviews Policy.