Since the Freelance Police, aka Sam & Max, made their debut in comic book form in the mid-1980s, the dog and rabbit duo have appeared in numerous graphic adventure games on our PCs. 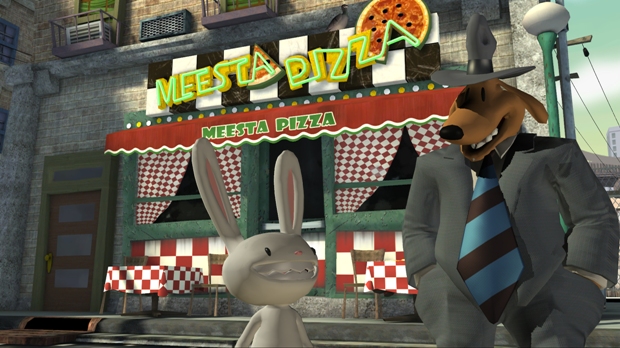 Sam & Max are back, and they’re as funny as ever

This time round, Telltale Games bring us a whole heap of gaming goodness with Sam & Max: The Devil’s Playhouse… five episodes packed onto a single disc. The suited, fedora-wearing dog detective (Sam) is the perfect foil for the slightly manic rabbit (Max). Their mission, as usual, is to put an end to the evil plans of some of the most devious foes ever and save the world.  What’s more, the latest edition for PC/MAC includes a set of pin badges and a poster – the perfect accompaniment for long-standing fans of the series or an extra incentive to those new to their escapades.

For newbies, the game is immediately slightly manic, peppered with jokes and some real laugh out loud moments. Each episode bristles with comedy; the one liners are clever and the dead pan humour is pulled off really well.

The Devil’s Playhouse sees Max get to grips with a new psychic ability unlocked by the impressive sounding “Toys of Power”. It’s a pretty impressive string to his bow too as delving into the recesses of Max’s mind allows you to play about with shape shifting, teleportation and telepathy! 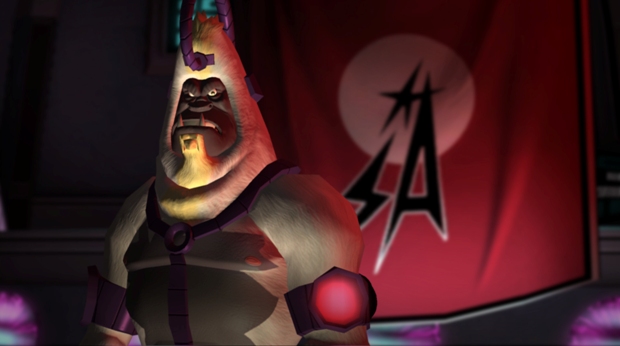 Their world is full of madcap characters

Sam & Max games initially used the lauded point and click SCUMM engine, but the latest in the series see everyone’s favourite investigators move with the times, evolving to use a new control method that proves extremely effective and keeps the screen uncluttered. A simple click of the mouse accesses your inventory, items in the game world or switches between the two protagonists so they can solve puzzles and manipulate objects. It plays out almost like an interactive comic book – or an animated film and it’s superb!

From the moment you leave the menu screen and find yourself in a “bizarre space zoo”, meet a giant power-hungry ape aboard his space ship, transform into a plant pot and implant a homing beacon on his furry back to suck him into the Penal Zone(!), you know you’re in for one hell of a ride. 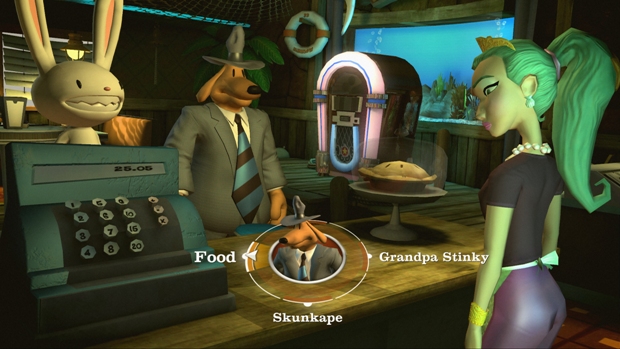 The five episodes should keep you occupied for some time

There are five parts to this self-dubbed “symphony of mayhem”. The first – “The Penal Zone” – sees you take on the big ape mentioned above, General Skun-ka’pe, who’s desperate to destroy the planet and take over the galaxy. Once his plans for world domination are thwarted, you can turn your hand to part two, “The Tomb of Sammun-Mak” – where our heroes discover a projector and find themselves watching the adventures of their great grandfathers. Max is then lobotomised in the third in the series, aptly called “They Stole Max’s Brain!” before loads of cloned Sams turn up in the fourth, “Beyond the Alley of the Dolls”. The conclusion – “The City that Dares Not Sleep” – switches the focus back on our rabbit friend who is turned into a monster and starts to cause havoc in New York.

Throughout each part, the characters are well developed, the script is funny and well-written, and it all looks absolutely fantastic. The cartoony graphics are spot on and the voice acting is really well done. A dramatic soundtrack kicks in too, accompanying the madcap plot.

So stop reading this, and try to get to grips with the mind of a sociopathic bunny rabbit immediately. Sam & Max are back, and they remain one of the best double acts ever to grace our screens.

This game was reviewed on PC

The characters - with their fantastic voice acting - make this game great! Sam & Max are back in five fantastic episodes. This is great value for money - and will make you laugh out loud.

Some may find the pace a little slow. The graphics are decent but not exceptional.

Final Verdict:
GOOD
The dog and rabbit crime fighting duo are back, and they're just as crazy as ever. The Devil's Playhouse is funny, looks great and will keep you glued to the screen for ages.
A copy of this game was provided by Developer/Publisher/Distributor/PR Agency for review purposes. Click here to know more about our Reviews Policy.