SBK-X: Superbike Championship is a licensed racing game developed by Black Bean Games. It is available on Xbox 360, PC and PS3. It is the fourth SBK game to be produced by the Italian studio after the previous owner of the rights (EA) let the franchise lapse since 2001. The first ‘new’ instalment covered the 2007 series of the race.

For the last decade motorcycle racing games have been totally dominated by an arcade racer called MotoGP. Now a new title for motorcycle fans has arrived, SBK-X: Superbike Championship. As the name suggests, the game is based on the World Superbike Championship. This sport puts riders on bikes available for the road, just tuned for racing; rather the purposely built bikes in the MotoGP races. Unlike the MotoGP franchise, SBK-X is both a simulator and arcade in one package. The game features all the riders, bikes and tracks from the 2010 race season. The game has many great features including the team engineer who gives you tips on how to tune your bike and suggests the setup(s) he thinks are the best for the track and weather conditions. Depending on the team you race for, you will be given better or worse tips & set ups. If you race for a Works or Pro team, like Yamaha Italia, you will be given the best; but if you race with a Privateer team, such as Yamaha Grillini, you will only get ordinary stuff. 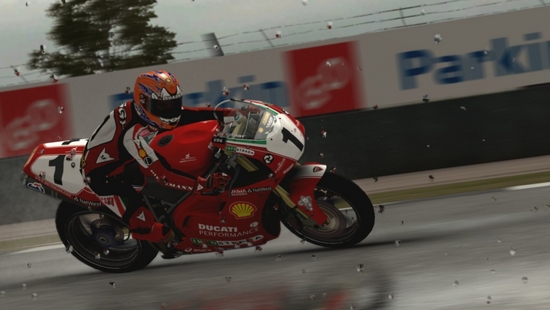 It’s okay, the graphics gave me trouser-trouble too.

The player has the option to play in Basic, Arcade, Simulation or Extreme mode. These are what they say on the tin, apart from the last. Extreme Mode is like Simulation except all driving aids are turned off and full bike damage is possible. You can customise mode settings to what you like. Controls are ultra-realistic. If you push the throttle too hard your bike will go sideways. In Arcade Mode doing this will lose valuable seconds on your lap time or if you have traction control off you may damage your bike or injure your rider which will result in your racer retiring from the race. Initially the handling of the bike will take time to master. After a few races you will begin to master it and start to turn some aids off; such as setting traction control to medium instead of full. You are offered tutorials, but they are unhelpful. You are best off starting in a race to practice. I brought in my Dad to guest-test this, and he’s never played an xbox game in his life – but has ridden motorcycles for years. Once he got the hang of which buttons did what and after a torrent of swearing, we set the camera to in-helmet instead of third person view and he was demolishing my lap times.

There are four types of weather conditions: Sunny, Cloudy, Wet and Rain. The bike will handle differently depending on the conditions. In a sunny race your bike will have more grip to the road, thus clocking faster lap times; but a cloudy condition will have a lower track temperature meaning you will have less grip due to the tires not being able to hold enough heat. Wet/raining tracks will have puddles positioned around the course. Hitting these will decrease your grip to about zero. There is a nice feature with these conditions though: the appearance of ‘dry lines’. Sticking to them will give you more grip than the AI bikes if they’re on wet parts of the track. Wet conditions are of course the hardest to master. You will have very little grip at all times. Too much throttle will cause you to go flying through the air; too much braking will cause the bike slip from underneath. 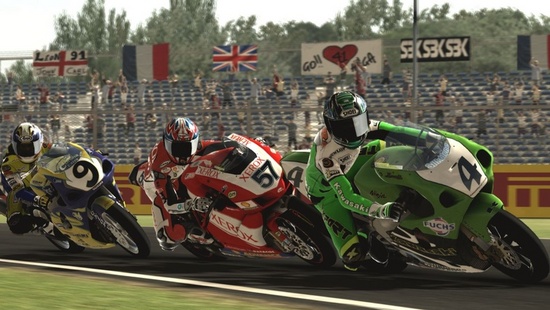 Unlike other franchises, all the bikes in SBK-X are licensed.

There are several different game modes. Instant Action puts you right in the riders seat giving you a random rider, bike, track and condition. Quick Race gives a an option of simply choosing a track, team, rider, starting position and what condition you want to race in and begin to race. You do get to tune your bike and get engineers advice. You then go straight to the race. Race Weekend gives you the full race experience. You can have a practice session where you can test set ups and practice the track. You then do the first qualifying session which is the main session. If you clock among the top times then you do the Superpole session where you get one lap to put in your best time to determine where you will be starting on the grid. Championship is the same as race weekend but you will be competing to be number one in the championship by winning races and getting points. The racer with the most points at the end of the season wins. Time Attack requires you to break the current real-life records for the circuits. Another game mode is Challenge which gives you different scenarios to do. These put you in situations where you may have to have a last lap battle with another rider and win or you have to complete that lap with damage to your bike.

SBK-X has great physics. Unlike other games your bike will wheelie slightly coming out of corners if you accelerate hard enough. Suspension movements are also spot-on. When coming into braking the bike will start to drift and if you are not careful will throw you off the racing line and you will be off the track. 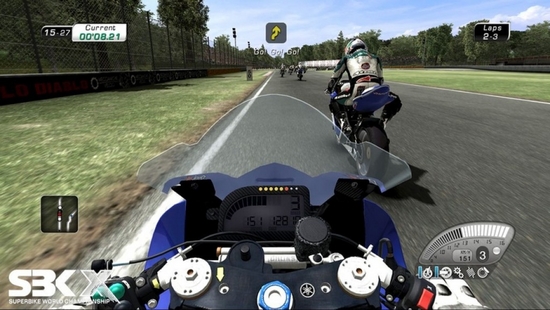 Even my Dad can play it – what’s your excuse?

The graphics in the game are sharp and smooth. Bikes are detailed very well, you can see every part of the bike and they almost look photo-realistic. Unfortunately some parts are bumpy like the chain. Overall the bike while racing looks like a photo or video of the real thing. The bikes are accurately coloured and logos are in the exact same position as their real-life counterparts. The tracks are also very well-modelled and look & feel the same as the real thing. The differences in surfaces between the different tracks are noticeable, which is great. Detail on everything else on the track like curbs, rubber marks, painted lines etc is superb and are as good if not better than any other racer on the market today whether it be bikes or cars. Weather conditions are also superbly implemented. When it is cloudy everything is dark and the reflection off your bike will be less. In the rain water drops will hit the screen and the faster you get the more they spread out. You could almost think that your TV is wet.

Sounds of the bikes in SBK-X are brilliant. Each type of bike has its own sound that is just like the real thing. Ducatis have a deeper sound due to the type of engine while a Honda or Suzuki has a higher pitched sound. Tire screeching and other sounds are all very accurate. Environmental sounds are also very good. You get hear helicopters that just make you want to look up. Cheers from the crowd also sound great just making you want to continue on. Rain sounds and storms are also very realistically recorded. Sadly the game has nothing to unlock except photos and videos, and you may become bored with it if you are not a motorcycle rider or fan. If you are a fan and know about motorcycles you will thoroughly enjoy playing this game. There are hours of gameplay just in tuning your bike for each track to get the perfect time.

This is the sight of “Pure Awesome” (with apologies to Chuck Norris).

SBK X is a great game for any motorcycle rider or fan. If you are neither of these you will probably get frustrated with the game. For years we have had to play MotoGP which is very unrealistic arcade racer. The Sim mode is brilliant and is probably the best on the market at the moment for consoles. There are a couple of downsides but the pros outweigh the cons.

Very minimal story mode, Limited unlockables/replay value, controls can be hard to pick up - but passed the Dad Test.

Final Verdict:
EDITOR’S CHOICE
Carlsberg don’t do motorbike games, but if they did...
A copy of this game was provided by Developer/Publisher/Distributor/PR Agency for review purposes. Click here to know more about our Reviews Policy.