First off, let me just say that I am not fan of Twilight. I haven’t watched the movies or read the books. And just thinking about them fills me with rage. So when I received a copy to review, I was less than enthusiastic. But, I like to think I’m a dedicated reviewer, so I took several ‘dealing-with-children’ strength Chill Pills and off I went. Scene It? Twilight is a trivia game based on the original movie in the Twilight saga. So if you were looking for any New Moon references, you’re bang out of luck. 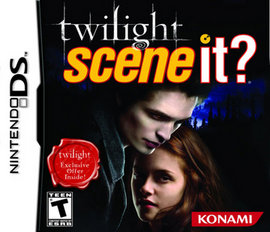 THE TAINT WILL NEVER RUB OFF

That said, there is certainly enough material to keep the questions fresh for an extended period of time. There are 500+ multiple choice questions based on the movie. There are two modes of play: Flex Play allows the gamer to choose how many questions they will be required to answer, and Standard Play which gives the Twilight fan three rounds of questions plus a “Twilightning” *vomits* round where points can be lost for incorrect answers. The questions range from being simple-enough that even I could hazard a reasonable guess, to those which require an in-depth knowledge of the movie.

The game isn’t just multiple choice text questions though. There are parts of the game that show clips from the movie and the gamer is then asked a question about the viewed clip. At least this gives the non-Twilight fan a chance to get answer some questions correctly and score some points. Points are awarded depending on the time taken to answer the questions. Answering quickly and accurately will score the most points. Scoring above a certain amount of points unlocks bonus material: picture stills from the movie. Fans of the movie will no doubt find this an incentive to try to better their score – I didn’t. 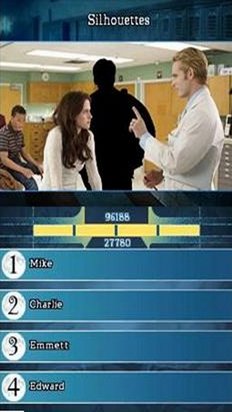 I answered most questions using the Scientific Method of eeny meeny miney mo.

Visually, Scene It? Twilight does an admirable job for the game it is. The backgrounds are probably similar to what you’d see on the desktop of a Twilight fan (i.e. trash), but the movie clips are of a decent quality. The font that the questions are written in is easily readable, which is always important in a quiz game. The audio is also good: The voiceover is credited as the Twilight character Dr. Carlisle Cullen (it meant nothing to me). The music is quite good too as it matches the mood of the game/movie. The video clip audio isn’t too bad, but I did find that I needed to turn up my speakers to hear some of the dialogue.

But, the game does have a huge downside. The length of each play is alarmingly-short. A typical ‘three round + lightning round’ game lasts around five minutes. And that includes time taken to watch the clips before answering the question. For a retail movie based game, I would have certainly expected plays to last much longer than that. 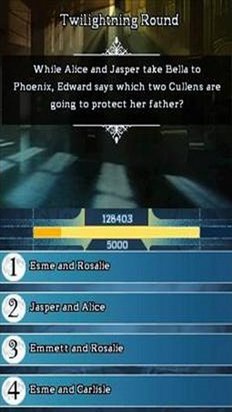 CAPTAIN! The crappy pun detector is off the scale!

Personally, I would rather eat red-hot chillies than purchase this game (and not just because I am a chilli-fiend). As an English student I loathe the Twilight books for their poor writing and ludicrous plot. As an avid reader I detest Stephanie Meyer for ruining vampires by giving them more sparkle than an explosion in a craft shop. As far as the game goes, I’m fairly sure I’ve played trivia games on quiz machines in bars which lasted longer – and were more enjoyable DESPITE paying £3 for each go. But if you are a ‘Twihard’ fan of the series (and most fans are) you will probably enjoy the game and the outlet it provides for showing off your in-depth knowledge.

Satisfactory video & audio, well laid out and easy on the eye.

Final Verdict:
MEDIOCRE
Konami hits bottom of barrel: CEO will never feel clean again.
A copy of this game was provided by Developer/Publisher/Distributor/PR Agency for review purposes. Click here to know more about our Reviews Policy.