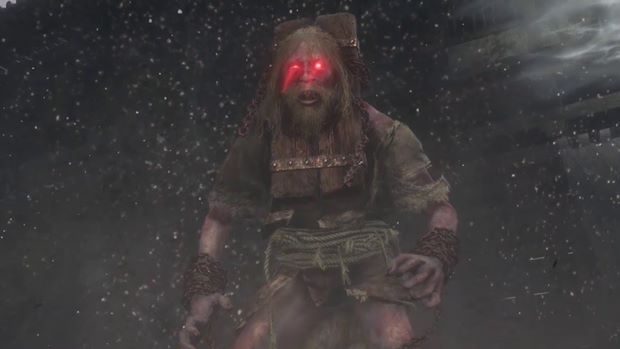 This is a very easy mini-boss but only if you are paying attention and playing like a true shinobi. You need to eavesdrop on the two soldiers who are standing a few meters away from the boss They reveal a very important information regarding the boss’s weakness. The Chained Ogre is afraid of fire, so in order to defeat it quickly, you need the following items:

Step 1: Kill the nearby enemies and the one with the spear who is standing near the boss. The Chained Ogre would have already broken free of his shackles by now. Run far away from the area until the alert music stops, but do keep an eye out for the Chained Ogre’s movements. Once the alert music stops, back stab the boss using a deathblow. This will drain his one life bar.

Step 2: Now throw Oil at the boss and the use the Flame Vent Prosthetic tool. This will inflict some serious damage on the boss. Keep doing this while dodging his attacks (specially his grab attack) and he should be down in no time.

Yet one of those boss fights that can get really hard if you don’t know what needs to be done. To ensure that you defeat the boss, you need the following item:

The trick to defeat this boss is to get behind him every time he tries to strike at you. Just keep on dodging towards his back and lay the smackdown using the Axe prosthetic.

However, there are two attacks that won’t allow you to get behind this boss. The first one is a push attack and the other is a sword combo. Simply dodge or jump away whenever he does these attacks. Once these attacks are completed, simply lay the smackdown on his back using the Axe prosthetic and very soon you will be able to break his poster and inflict the death blow.

Once again, Snake Eyes Shirafuji is a very easy mini-boss if you know what to do.

Ensure you have the following items:

Once you are near the boss, don’t fight him yet. Instead, run straight pass him and on to the bridge. Once you are through the bridge, the boss would have lost track of you. Now return back to the boss and back stab the boss using a deathblow. This will take care of his one life bar.

Now jump on the ledge behind the boss and activate the Umbrella tool. Now let the boss take shots at you, the umbrella will absorb the power of the shots and deflect it back to the boss (thanks to Projected Force skill). While staying on the ledge, rinse and repeat the actions above.