Fans of Serious Sam want one thing and one thing only: Unabated and quick paced destruction. The original game has served as a cult hit for generations, with its crazy enemy designs and no bullshit design philosophy. With Serious Sam 3 soon on the horizon, a side-scrolling side story has been developed separately by Mommy’s Best Games in order to whet our proverbial appetites. It’s mixed gameplay isn’t quite enough to do this in earnest however.

The game starts as all games in the series seem to, with Sam shooting the crap out of everything near an Egyptian pyramid. The big difference in Double D (what the hell does that stand for anyway?) is that the game is played from a 2D perspective, rather than the first person viewpoint traditionally used in the series. The action is still there and, though there are a few puzzles peppered in between, it is all about quick reactions and blasting anything within a five mile radius. 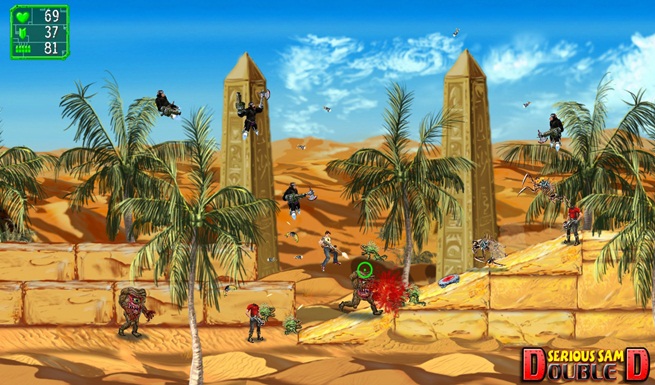 Double D can serve up its share of tense moments, but it does get old after a while

Whilst this single minded philosophy has benefited the Serious Sam series before, and plenty of other games in the genre for that matter, it doesn’t quite work as well in Double D. The obvious issue is repetition, with the game throwing very little at you in the ways of variety aside from a few quips and one-liners. The other problem is that of control. Thousands of older 2D shooters have done little else but offer enemies to shoot, but they provide tight enough controls and mechanics that somehow lift the game out of a trigger spamming rut. Serious Sam: Double D doesn’t quite manage this though, with a slightly spongy feeling that hampers control fluidity. It lacks the refined qualities of classics such as Contra, instead feeling like a graphical accompaniment to the ever enjoyable task of clicking your left mouse button a hundred times a minute.

As far as a graphical accompaniment to such an activity goes though, the visuals in Double D are fairly competent. It’s not going to revolutionise the way we perceive gaming, but it’s fun and full of character. The classic enemy types of Serious Sam also make an appearance. It never does seem to get boring fighting jet-pack wearing monkeys or headless kamikaze bombers. It all adds to a certain charm that the game has. The dialogue and thematic content of the game is less charming, seeming a bit put on at times. There are a variety of self-aware and mocking quips, and the fourth wall is fractured, taken apart and repaired at regular intervals. It all lacks a certain soul though, as if it is by numbers rather than a creative outburst from a humorous craftsman of comedy. The jokes about sexually attractive AI constructs can only stay fresh for so long. 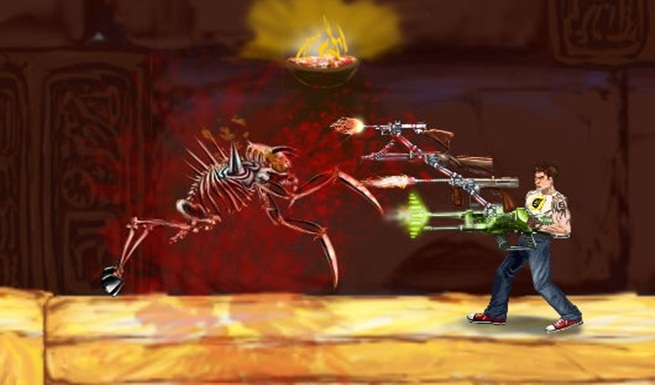 The gun stacker is a real highlight

What separates Double D from the entourage of other overtly misogynistic 2D shooters is the gun stacker, the game’s only real innovation. The game already has an impressive arsenal of different weapons to discover, but you can also find hidden attachment arms that let you stack guns together. It means my dream of a flame-throwing shotgun can finally be realised, but I’m also left with the creativity of adding as many weapons to such a blueprint as I have connectors. There is a joy to running around with ten guns stacked together, and a certain amount of creativity can be implored to discover the best combinations. The gun stacker is definitely the main ace in the sleeve that Double D has, and it helps separate it from the crowd successfully. My only issue comes with how rocket and explosion based weapons are balanced. Considering that this is a game entirely about quick reactions, the fact that your own explosions can damage you seems like a let down. It certainly makes you re-think your strategies but, in a game that is otherwise 100% action, this became an irritant that did little more than slow me down. Before I knew it, I found myself very reluctant to use any rocket weapons, a side effect that damages a game like Double D that should really be all about the explosions. 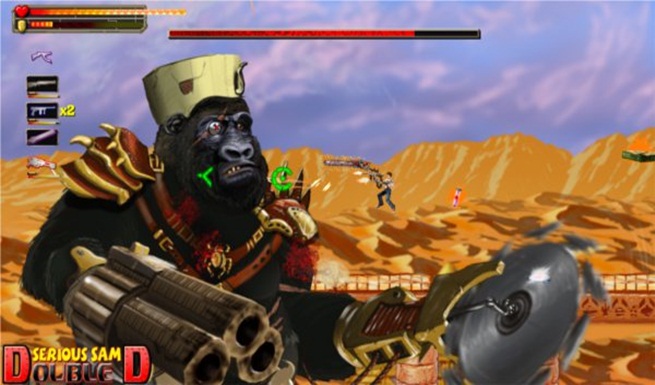 The enemy designs are impressive, and the visuals appealing

The length of it all is also an issue as, on account of Double D’s various problems, it is unlikely to be the kind of game you’ll play through more than once. Achievements, harder difficulty levels and secrets galore make a good stab at adding repeatability, but the majority of gamers have better uses of their time than to play through a fairly average game a second time. If it’s your sort of thing though, there will be enough content to keep you coming back for a little while at least.

Serious Sam Double D offers a single innovation in the form of the gun stacker. It’s fun, fairly tactical and looks the business, but it gets old quickly. This also a description that fits Double D in general. It’s enjoyable in short bursts and looks good, but there isn’t enough going on to really justify you playing it over other classics in the genre. If you’re a Sam nut though, it may offer the refreshing entry into the Serious Sam 3 hype you need at a fairly reasonable price.

Colourful visuals, A refreshing change to the series' mechanics, The gun stacker is cool as hell, Great enemy designs, Can be amusing

Final Verdict:
FAIR
Serious Sam returns in a precursory 2D adventure to his anticipated third instalment. Despite some cool ideas and a fourth wall bending weirdness, Sam's new side story feels put on and repetitive. It serves as a pleasant distraction, but little more
A copy of this game was provided by Developer/Publisher/Distributor/PR Agency for review purposes. Click here to know more about our Reviews Policy.