Shattered Horizon is the first game from Futuremark Games, a wholly owned studio of the Futuremark Corporation. Futuremark makes computer benchmarking software a.k.a. software that analyzes your computer to see how good it is. Futuremark Games was started in 2008 to put out games that could push current 3D hardware and make games with new and innovative gameplay mechanics. Shattered Horizon manages to accomplish both of those feats and at an excellent value none the less.

Shattered Horizon takes place 40 years in the future. A mining accident on the moon nearly destroys it sending tons of rock into earth’s orbit that becomes known as the Arc. Survivors of the accident as well as members of the International Space Station are trapped in the Arc and must fight surviving miners for survival as the miners attempt to take what they can from the wreckage. This interesting back-story is wasted by the fact that there is no single player and therefore, no way to experience it in a plot driven fashion. It is used simply to set up the multiplayer factions.

Just one of the excellently built multiplayer maps available.

Luckily the multiplayer is very good and once you jump in you’ll be too concerned with playing that to worry about a single player campaign. The game runs entirely on dedicated servers, all of which were lag free. Once you select your faction (the only difference between factions is color) you begin play. There are four maps in total with more to come through free downloadable content. The four maps are all very well designed to embrace the gameplay and look great and accommodate up to 32 players. Maps range from the Arc itself to the remains of the International Space Station, to mining facilities on chunks of the moon. Across these maps you can play one of three modes.

While all of these modes are familiar, Shattered Horizon’s gameplay makes them feel new again. All of the environments are entirely Zero-G. That’s right, no gravity. At first it may feel wired to have no solid ground under your feet, but after a game or two you’ll be accustomed to the games easy controls. It controls like most FPS games, however instead of jumping, space allows you to float higher while in stead of crouch, shift allows you to float lower and even land on surfaces. The ability to land on surfaces is especially useful when you want to set up ambushes around a control point. Matches are tons of fun and the gameplay serves to keep the game feeling different from all of the other FPS games out there and will keep people coming back for the unique experience. 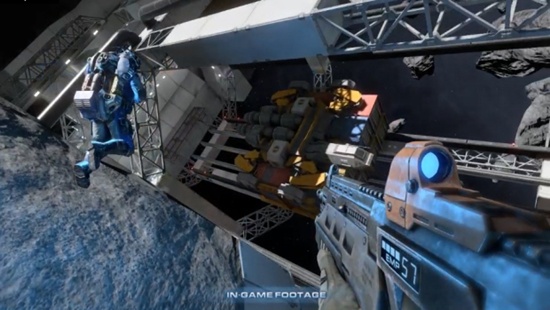 The games only true flaw is the requirements. There is no DirectX 9 compatibility and therefore Windows XP. You’ll need a DX10 compatible card as well as either Windows Vista or Windows 7. The exchange is worth it as Shattered Horizon looks amazing. The lighting is fantastic and textures are spot on. It adds to the immersion of the experience bringing you that much closer to truly fighting in space. Just trust me when I say you’ll want to meet the suggested requirements. A card that meets the minimum will let you play the game, but it won’t guarantee a good experience. Lower end cards will be met with a lower frame-rate, which for obvious reasons is no good for First Person Shooters, and on a lesser note won’t be able to enjoy all of the graphical detail. If you must run it on an older card, do yourself a favor and make sure it’s one the developers recommend. Trust them; they know what they are talking about.

Shattered Horizon succeeds at bringing new life to a genre flooded with the same old shooters. It’s unique gameplay and amazing visuals make for an experience that will most definitely keep players coming back for more. At the price point of $20, many will see it as a steal and will be hard pressed to find a game of better quality and value. Everyone else, either unable or unwilling to upgrade their hardware, will be force to watch from the sideline.

Looks great. Levels are built perfectly to embrace the gameplay. At only $20 it’s a great value.

Requirements can be demanding for those using old hardware. No DX9 compatibility. Lack of single player wastes the setting. Navigating levels takes getting used to.

A copy of this game was provided by developer/publisher for review purposes. Click here to know more about our Reviews Policy.
Tagged With: first person shooter, fps, futuremark, horizon, pc, shattered, Shattered Horizon