Sometimes celebrities need to stick with what their good at. Has anyone ever heard Hillary Duff’s singing career?! (although saying that does imply she was good at acting, which is highly debatable.) Indeed the same should be said of Shaun White, who’s licensed snowboarding titles of old were reasonably fun. Yet for his new title Mr. White has tried licensing a skateboarding game, but a few creative graphical flairs and a dodgy pseudo-political plot are not enough to redeem the bizarre and irritating design choices the developers have made.

It would seem a perfect time to try and capture the skateboarding fan base in gaming, what with the Skate franchise taking a hiatus and the Tony Hawk brand in a seemingly endless state of decline. Sadly, the failures in Shaun White Skateboarding come thick and fast. The controls are the first issue I came to grapple with, as they just seem unnatural and highly unintuitive. They tried to take the good points of both the Skate and THPS franchises by allowing you to use both the face buttons and right analogue stick to perform tricks. Unfortunately, both methods of control seem spongy and I generally felt throughout my time with Shaun White Skateboarding that I wasn’t in complete control of what tricks my character was doing. 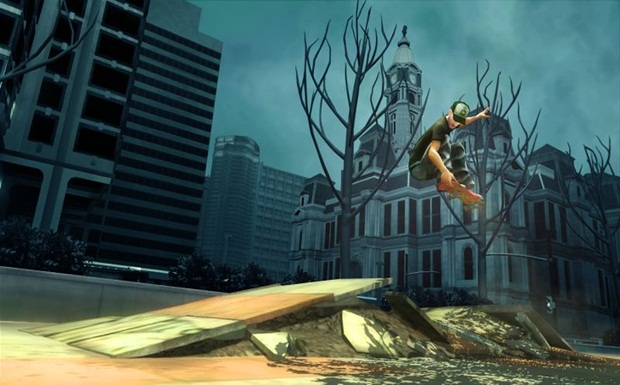 My second issue takes place with the general engine of the game. You can dismount from your board and walk around on foot, but when doing so the movement seems horribly stilted and unnatural. Skating around on all four wheels seems much more normal and boasts some quite slick animations, but it quickly became apparent that no matter how badly I screwed up in game I simply could not bail. That’s right, you effectively cannot mess up no matter what you do. Not only does this just look and seem really unnatural to me, but it also removes all challenge and sense of urgency from the game.

Third time traditionally being the charm, we swiftly move onto the plot. This has to be the biggest chink in the the game’s proverbial armour. The idea is that the evil governmental body, “The Ministry,” has outlawed skateboarding and arrested Shaun White and it’s up to you to skate your way around the city to free it and Shaun White from the clutches of the government. It does set up some cool aspects of the game, like the way that colour springs from your board as you perform tricks, but with the skating being as lame and stilted as it is I found myself routing for the Ministry the whole way through. It was certainly a nice attempt to break from the usual “rags to riches” tales told in extreme sports gaming, but the tacky 1984-esque aesthetics and the awful skateboarder stereotypes did little but frustrate and annoy. The only good that came out of the idea was the shaping elements, whereby you can skate on certain verts, grinds and street areas and watch them shape out and expand before your very eyes. It’s a cool little visual trick that matches the story, but the inability to control how most of the objects expand and “shape” became frustrating. This same linearity applies to the map design that, whilst visually was varied and interesting, proved linear and dull to skate through. The quests soon followed, requiring little out of the way of the standard “achieve X amount of points” (or flow as they cleverly try to disguise it) paradigm. 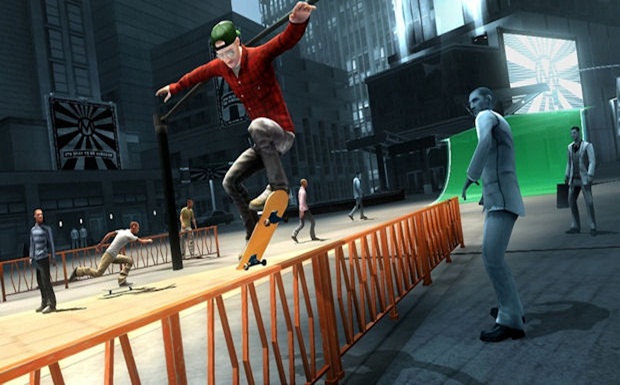 This looks kind of skillful, until you realise you can’t actually bail

If the general premise of the story didn’t annoy you enough then just wait till the NPC sound bites start to kick in. With random civilians constantly screaming out that I’m “making a difference” with my moves, it just felt really lame and like a last minute addition. The main character voice overs were no better with the articulate phrase of “hey dude!” apparently being the main catchphrase of skateboarders the world over. Way to perpetuate the stereotypes guys. The music too reeks of skateboard cliché, although this is of course more an issue of personal taste over any objective lack of quality.

The visuals of the game are actually reasonably well realised with crisp and varied environments and some pretty fluid looking trick animations. The only glaring problems were some oddly angular body proportions and some seriously lazy death animations. Why they decided that falling from a great height would turn you into marbles I’ll never know. 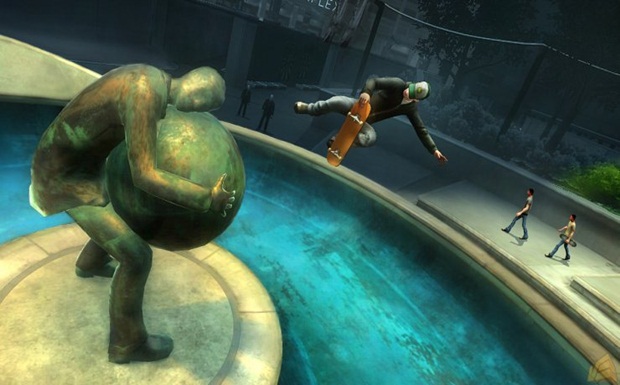 The graphical style is cool, with a nice contrast between colours. It’s a shame the plot isn’t quite as interesting

The lifespan of Shaun White Skateboarding imitates the other aspects of the game in its unparalleled mediocrity. The single player will last you a reasonable twelve hours or so should you burn through it but the achievement list, though fairly standard, will help lengthen this if you’re going for 100% completion. The multiplayer however will fail to hold your attention for any time at all. The inclusion of two player split-screen is a nice touch, though the lack of variation in the game modes is a sheer insult in comparison to the hours of fun I had in my youth on THPS2’s excellent horse mode. All the modes revolve around some kind of “get a lot points” template but with a very minor slant on it, and when I say slant I mean a texture change here and there. This is lazy game design at its peak, and let it be known that this does not pay off in the slightest.

There are certainly worse games out there than Shaun White Skateboarding, but no matter how I look at it there is just no point in this game existing. For a fun arcade skating experience I’ll fire up an old school Tony Hawk game, and those who want the trimmings of a proper skate sim can enjoy the aptly named Skate franchise. Shaun White tries to do both, and it fails miserably as a result. Shaun White Skateboarding is an example of game design being a process of getting more out if you put more in. This is a poorly envisioned attempt to capitalize on the failures of competing franchises, and it plays as such. You’ll be better off returning to older skateboarding titles for the time being if you really need to get your extreme sports fix.

Final Verdict:
BAD
Shaun White Skateboarding attempts to claim the digitised skateboarding crown by mixing both the mechanics of Tony Hawk's and the Skate series. Sadly, it winds up being the worst of both worlds
A copy of this game was provided by Developer/Publisher/Distributor/PR Agency for review purposes. Click here to know more about our Reviews Policy.