The greatest Shin Megami Tensei game, and a seminal moment in the history of JRPGs.

Shin Megami Tensei has always been the other ‘great’ JRPG pillar. There’s Final Fantasy and Dragon Quest, and those two have significant appeal, both in the west, and in Japan proper. But Shin Megami Tensei, which started as a spin off of a series of games based on a Japanese horror novel, has always catered to a niche. A hardcore, dedicated niche, but a niche nonetheless. While its own spin off, Persona, has achieved significant success with all kinds of audiences throughout the world, the core series remains a bit obtuse for most people.

"If you are a series fan, you will find yourself right at home with this game, and will possibly find yourself never wanting to leave. "

Shin Megami Tensei IV, which is the first mainline installment in the series since Nocturne, which appeared two generations ago on the Playstation 2, will, at first glance, almost certainly not change that.

The story is as dense and heavy as always, the game remains unforgiving, even though it does make a fair few concessions to newcomers, and new mechanics are thrown at the player dime a dozen. However, as it turns out, it doesn’t need to change anything in the first place; a few tweaks, and all of a sudden, Shin Megami Tensei IV is the most accessible game in the franchise to newcomers, without compromising on its core design.

In spite of its accessibility, though, Shin Megami Tensei IV works because it unflinchingly puts its own design above and beyond anything else, and then hones said design to pitch perfection. While there are a couple of stumbles along the way, they never hinder the experience, and by the time all is said and done, you are left with a massively satisfying RPG which is so huge it will probably take several playthroughs just to fully appreciate what it has to offer.

If you are a series fan, you will find yourself right at home with this game, and will possibly find yourself never wanting to leave. If you are not a series fan, but end up playing this, you’ll find an incredible, hard as nails game with a novel approach to everything- exploration, combat, party members, and perhaps above all, storytelling. 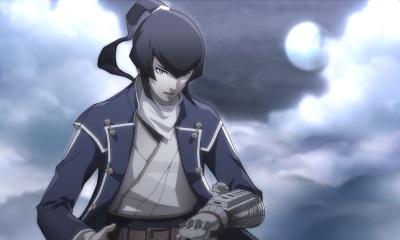 For those who are unacquainted with the Shin Megami Tensei series, they take place in a modern setting (usually a post nuclear fallout Tokyo), and they involve demon summoning and recruiting, the occult, and choosing a side between good and bad in the great war that unfolds.

The games have made an art form out of telling that kind of a story over and over again, and seeing how the player gets to decide just where his or her story goes in any given playthrough, the games have a lot more story to tell than one playthrough can possibly tell.

"The story somehow manages to build an atmosphere of oppressiveness and bleakness, and it builds just enough intrigue and mystery to always keep you on the tenterhooks. Suffice it to say, the story in Shin Megami Tensei IV is probably the strongest part."

If that, however, is what you go expecting into Shin Megami Tensei IV, you might be in for a surprise, as this game instead starts in a kingdom called Mikado, vaguely reminiscent of feudal Japan. Of course, things are eventually turned on their head, and before long, we’re back in business, but the way we get there is unexpected, and what happens after that also unexpected in how it unfolds.

I’m generally going to avoid talking any more about the story- what I’ve said so far is just the basic premise of the series, but I don’t want to ruin any more of it for any newcomers, especially given just how incredible the story in Shin Megami Tensei IV really is.

It starts slow, sure, but in a few hours, you’re completely hooked, playing more to find out what comes next than anything else. The story somehow manages to build an atmosphere of oppressiveness and bleakness, and it builds just enough intrigue and mystery to always keep you on the tenterhooks. Suffice it to say, the story in Shin Megami Tensei IV is probably the strongest part. 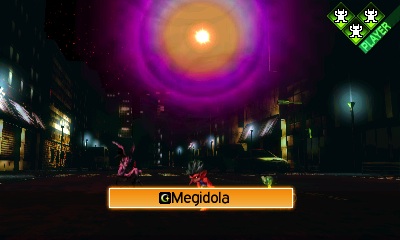 I don’t say that definitively, because that would be doing such a disservice to everything else the game does well. Take, for example, the combat system. Shin Megami Tensei: Nocturne’s famed combat system returns in this game, with all of its nuances and intricacies. You fight demons, but the only way you can do that effectively is to, paradoxically enough, recruit them.

After you recruit them, they fight by your side in battles, like Pokemon. Each demon knows certain attacks, each attack has a different elemental type, and your opponents all have different elemental affinities and weaknesses. Demons grow after battles, learning new attacks, and eventually even transforming into bigger, better demons.

"For all that Shin Megami Tensei IV does well, though, there are certain things that it, sadly does not. Some of those might have been design choices, maybe the others were forced by budget constraints."

So far, it probably sounds a whole lot like Pokemon, and that is because Pokemon did, in fact, take a lot of leaves out of Shin Megami Tensei’s book. However, there are more intricacies- for example, there is demon fusion, where you fuse the demons you do have, and get a different, possibly better demon with more potential for growth and transformation.

This would be like breeding, except you lose the demons you had before in the process. There’s also the actual demon recruitment process, which involves you talking to demons, trying to negotiate with them and appease their demands, but doing so carefully.

Each demon has a different personality, and you need to answer accordingly. Sometimes, a demon that is about to be defeated will offer to join you himself. It’s another great system, with a whole lot of variables, and it sets the game apart from anything else in the genre.

Then there is the battle system itself, which awards you turns based on how many party members you have, in addition to how well (or not) you do in battles. So, for example, if you attack a demon with his elemental weakness, or if you land a critical, you get an extra turn to attack, before the enemy even gets a chance. Theoretically, if you are good enough, you can wrap up a battle before the enemy even gets to attack.

Conversely, if you attack an enemy with an elemental attack that they’re resistant to, or if you miss an attack, you lose a turn. You also lose a turn if your negotiation or parley with a demon goes badly; in addition, the enemy can also gain extra turns if they attack you with an elementally advantageous attack, or if they land a critical, and they can lose turns if they miss attacks, too.

It’s all complicated, but it’s incredibly intricate, and it happens so fast that all these systems become ingrained and second nature pretty soon. Your performance in battle is further determined by your stats (the growth of which you decide based on skill point distribution every time you gain a level), and your equipment.

That’s a whole lot of mechanics, but that isn’t even taking into consideration other stuff like relics, status conditions and ailments, pre-emptive attacks, apps, and more. Shin Megami Tensei IV’s gameplay is as bursting at the seams with content as its story, and it really is hard to do justice to the sheer extent of mechanics available to you, the player, without you ever having actually played the game. 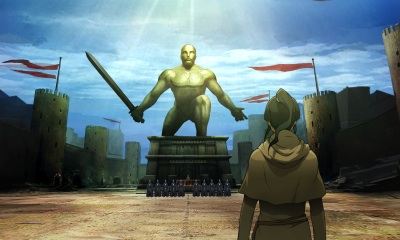 For all that Shin Megami Tensei IV does well, though, there are certain things that it, sadly does not. Some of those might have been design choices, maybe the others were forced by budget constraints. Still others are just inexcusably bad.

Chief among these is the voice acting. The game comes fully voiced, but the voice acting itself is rather grating. It’s not horrible, not like, say, Soul Hackers (another Shin Megami Tensei game Atlus released on 3DS), but it gets annoying.

The worst part is, you can’t turn the volume down and play, because the music is actually very good. To be fair, the game lets you turn down voice acting from the main menu if you want to, but still, it’s a pity that they didn’t have better voice actors in a game that has such a great story to tell.

"Shin Megami Tensei IV is one of the greatest JRPGs to have been released in the last ten years, and far and away Atlus' best work since 2008's Persona 4. It is a beautiful game, a triumph of thorough game design and a staggering amount of content, and it just works. "

Then there are the battles, which, if you’ve been following the game at all, you’ve probably already seen a fair bit of furore over. The game proper is full 3D, and it features third person movement and interactions, and everything, but during combat, it switches to an old school first person style, with you facing some barely dynamic sprites in battles.

It does make sense that Atlus simply did not have the money to have polygonal 3D animations for all the hundreds of monsters in the game, but it does feel like a jarring transition between navigation and combat, and it feels like a regression after Nocturne.

However, both of these are problems that any discerning player should be able to look past really soon. Fans of the series will find themselves at home with what is possibly the best entry in the franchise so far, whereas newcomers will be able to join in on the fun too, because of an Easy mode, and some design changes that do away with archaic conventions that unnecessarily made the older games so difficult.

It is, as stated above, a hell of a game, an incredible title. Surely, the newfound focus on story and storyelling after the rather drab (in that regard) Nocturne will help them get acquainted with this new universe too.

Shin Megami Tensei IV is one of the greatest JRPGs to have been released in the last ten years, and far and away Atlus’ best work since 2008’s Persona 4. It is a beautiful game, a triumph of thorough game design and a staggering amount of content, and it just works.

It works because it knows what it is. It works because it finds that magic mddlle ground between the niche and the mainstream. But more importantly, it just works. A masterpiece of design, and of staggering depth of content, Shin Megami Tensei IV is recommended to any 3DS player who has more than a passing interest in video games.

Incredible combat system, with a whole lot of depth and nuances; great story, with an amazing atmosphere, and a genuinely compelling premise; staggering amount of content that merits multiple playthroughs just so you can absorb it all; certain new additions to the franchise, that make this Shin Megami Tensei game the most accessible one for newcomers

The battle screens feel like a regression, and almost lazy, especially after the amount of work that seems to have gone into the rest of the game; the voice acting is annoying

A seminal moment in the history of its genre, Shin Megami Tensei IV is a masterpiece of design, and of staggering depth of content, and is recommended to any 3DS player who has more than a passing interest in video games.