Sharpshooter or near miss?

Thanks to the staccato hum of a nearby generator disguising my shot, the passing patrol was as oblivious to my presence as the officer in the distance who winced when my bullet fatally pierced his kidney. His body imploded in graphic fashion, bone and muscle torn to shreds – and he fell to the floor, his guards ignorant to his demise.

There’s certainly a guilty pleasure to the death and destruction in Rebellion’s Sniper Elite 3 – and the stealth-based shooter is definitely a refreshing change from the proliferation of run-and-gun titles that line the shelves.

This sequel once again puts you in the boots of crackshot Karl Fairburne, an elite OSS sniper, who’s in search of the rather clichéd “super weapon” in the Nazi’s control during World War II. Instead of the war-torn streets of Germany, and the typical drab grey environments, we’re instead transported to the arid desert landscape of North Africa, a sandy oasis that hosted some key battles of the conflict – and an oft-overlooked setting for games of this type. 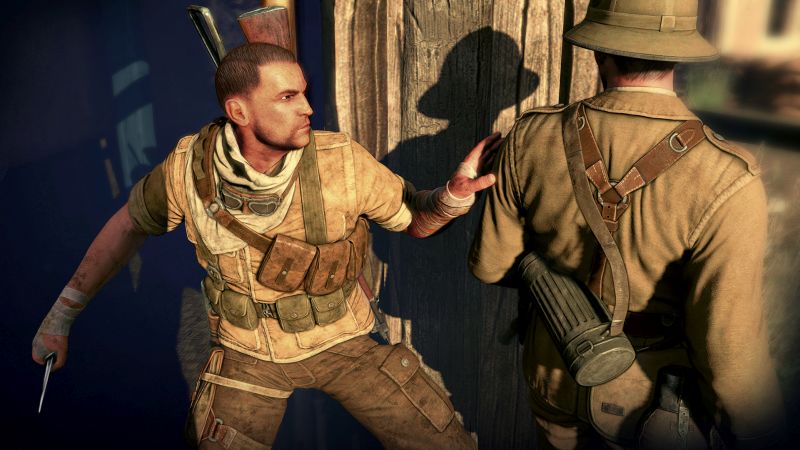 "The visuals are pretty decent, with dust being thrown about the place and sunlight streaming from the skies. It can be really quite striking at times."

It’s indeed a most welcome change, the terrain lending itself to locations that are much less linear than the previous games that suffered the bottlenecks of corridors, streets and destroyed buildings. It also ensures that each mission can be played out in different ways and via various routes. You can rush in all guns blazing if you like, and dive in Rambo-style unleashing merry hell and mowing down the horde of Nazi soldiers that run your way. Alternatively – and far more sensible – you could go all stealthy and crouch or crawl your way through the various outposts, stabbing enemies or picking them off one by one with your trusty M1 Garand or silenced Welrod pistol. And for a little variety, why not lay some devious explosive traps and lure soldiers into their path?

The visuals are pretty decent, with dust being thrown about the place and sunlight streaming from the skies. It can be really quite striking at times. The desert arena is very pleasant to look at – from the mountain ranges and rickety old bridges to the buildings and watchtowers.

Each of the eight missions boasts a huge play area (three times larger than the levels seen in Sniper Elite V2, apparently) and often requires a trek from one side of the map to the other to reach the next objective. It never feels like a slog, however, with minor optional tasks combining with a smattering of bad guys that never make the play space feel empty. You never know what’s around the next corner and it certainly keeps you on your toes. 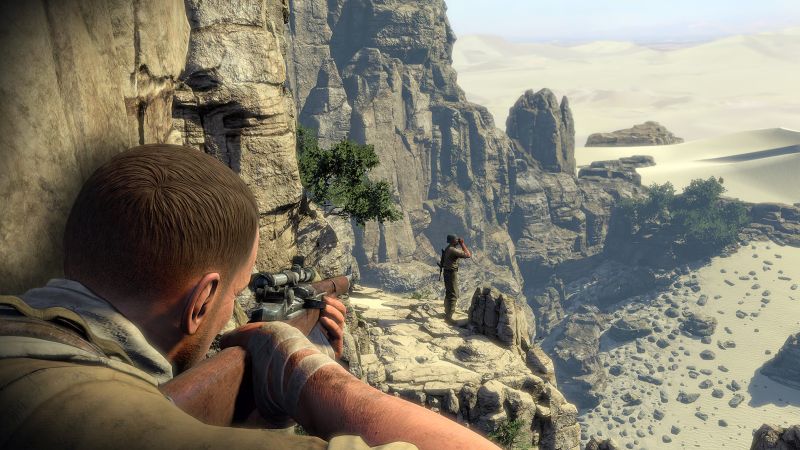 "Before long, you’ll feel like an absolute master of long range shots and be picking off distant foes with aplomb. There’s something immensely satisfying about firing a bullet towards some carefully planted dynamite and destroying a passing patrol or lying on a distant ridge and downing a gunner in a watchtower."

It definitely pays to stake out an area first so you aren’t surprised by passing soldiers. A click of the right stick pulls up a pair of binoculars, which can be zoomed in and out with the D-pad. Tapping the right trigger tags enemies so you can keep track of their whereabouts. Realism takes a bit of a back seat here, as those you’ve spotted then become visible even through walls and scenery…

Before long, you’ll feel like an absolute master of long range shots and be picking off distant foes with aplomb. There’s something immensely satisfying about firing a bullet towards some carefully planted dynamite and destroying a passing patrol or lying on a distant ridge and downing a gunner in a watchtower.

Successful sniping is celebrated via the trademark X-ray kill cam, a gratuitous reward for your disposal of an enemy that’s been souped-up somewhat in this third game. It’s a spectacular and incredibly gory inclusion – and one that is most welcome; you never tire of seeing a bullet spew from the gun’s chamber, soar through the air in slow motion and rip through the chest of the enemy, smashing through virtual bone, muscle and sinew. It’s glorious… in fact, it’s kind of a shame when you use a standard sub machine gun or throw a grenade and don’t get the cut scene.

The kill cam extends to vehicles too, with shots at highlighted areas causing a cut scene that shows shattered pistons and blasted components. It’s all very satisfying. 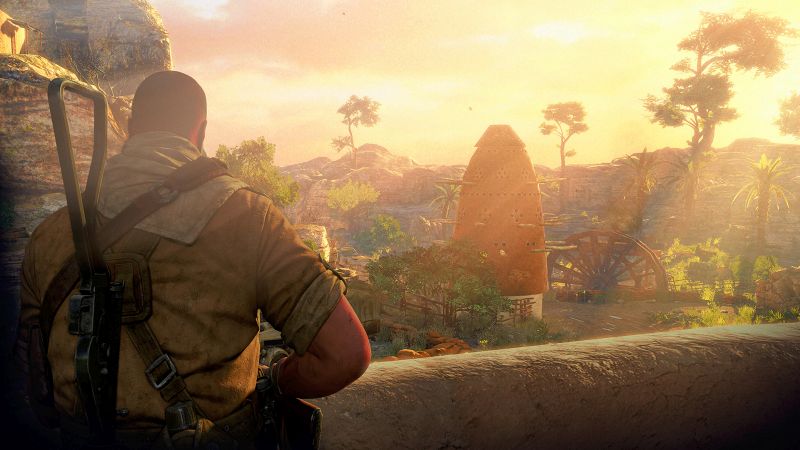 "There’s plenty of replayability that should see you get more value out of the game, with various challenges and objectives to complete, collectibles to find, and several multiplayer modes."

Should it all go horribly wrong and you’re detected, onscreen indicators give you a heads up for when it’s best to relocate and scurry off to another, altogether safer, location. Take too long, however, and you’ll be wiped out in seconds.

There are plenty of collectibles to be found throughout the game, from War Diaries and playing cards to weapon parts and sniper’s nests. Ammo litters the battlefield and you can root through the pockets of dead foes to supplement your stocks too. And don’t forget to dispose of the bodies when you’re done or someone may stumble upon them later and sound the alarm.

It’s a shame that close quarter combat is so cumbersome and awkward – silent melee attacks can only take place when you’re directly behind a bad guy and won’t work if there’s an obstacle in the way. Firing a pistol at someone when only a few feet away is literally a bit of a hit-and-miss affair too, and reloads often take place at the most inopportune moments. To be honest, it normally either pays to draw your faithful sniper rifle and fire away point blank or simply run away from their view and wait for the dimwit AI to forget all about you!

There’s plenty of replayability that should see you get more value out of the game, with various challenges and objectives to complete, collectibles to find, and several multiplayer modes.

The co-op option allows you to team up with a buddy and either play through the whole campaign, or try your hand at the Overwatch and Survival modes. Having a friend act as a spotter while you take the shots is great fun and adds an entirely new perspective to the proceedings.

Sniper Elite 3 builds on the previous games and improves on them in many ways. There are still a few foibles but it’s a compelling and fun game that is a nice change from all the other shooters currently available.

Gruesome X-ray kills never get boring. Co-op is a fun addition. Levels consist of large, wide open spaces so a variety of tactics can be employed

Plenty of dodgy AI moments as guards either miss you completely or forget about you. Levels can get a little samey

A copy of this game was provided by developer/publisher for review purposes. Click here to know more about our Reviews Policy.
Tagged With: 505 Games, pc, ps3, ps4, Rebellion Oxford, Sniper Elite 3, xbox 360, Xbox One