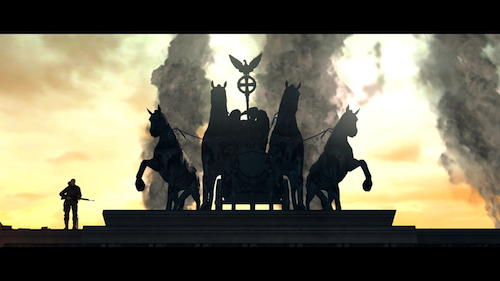 Curious that back in 2007, you couldn’t move for American-led World War II games that involved the killing of thousands of Nazis without a care in the world? These days they’re few and far between, neglected like the proverbial middle-child, in favour of more contemporary, Russian-slaughtering brethren. Had the game been released a couple of years ago, in identical form, it would’ve been flippantly dismissed as ‘just another WWII game’, but in the current climate Sniper Elite V2 seems like a breath of fresh air.

Created by the somewhat erratic scamps at Rebellion and birthed by 505 games, Sniper Elite V2 isn’t exactly a conventional World War II game. By the time you step foot into the wonderful world of war-torn Berlin, it’s is pretty much over, no thanks to you. All that remains are a few stubborn pockets of Wehrmacht resistance and our good friend Herr Hitler nowhere to be seen -unless you pre-ordered the game, that is-. You’re tasked with mopping up, as well as capping a few token high-ranking Nazi’s, as well as single-handedly starting the Cold War. It seems it’s almost impossible for a shooter of any calibre to exist in the 21st century without the bitter undertones of Cold War fanaticism rearing its ugly pinko head. In a much welcome change from stereotype, German’s aren’t merely heard belting out ‘SCHELL!’ at to top of their lungs, instead they’re largely replaced by a gaggle of soft-talking, well-spoken real people, even if they seem frequently unaware that their friends have just been loudly murdered just around the corner. Resigned to the fact that for the most part video game hair looks terrible, Rebellion opted for an approach that makes every single character look like a Buzz Lightyear with a wasting disease. 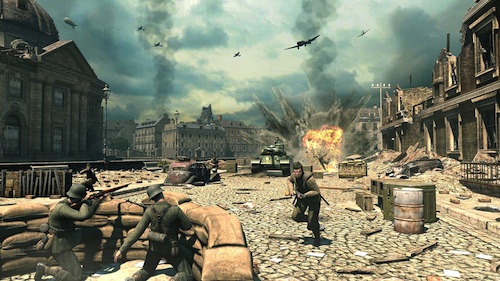 Sniper Elite V2 is a perfect example of a game not bogged down by the inclusion of a plot beyond the necessary. Yes, you go from point A to point B, taking out targets and causing a little mischief, but it’s never any more than that. Any attempt to shoe-horn a sub-plot about getting home to your family and sipping ice tea on a porch would’ve felt nothing short of contrived. You’re tasked with stopping V2 rockets from causing a world of chemical hurt, it’s that simple.

Each level has the same basic format: get to a certain Berlin-based vantage point either through covert stealth or blazen swing-dickery, although I’d highly advise against an ‘American’ approach. Be warned, Sniper Elite V2 is one of the few instances where you die considerably quicker than the enemy, regardless of difficulty. Levels range from linear claustrophobia to the open ruins of Friedrichschain. Berlin is well realised and as the game progresses, so does the degree of scale of the destruction, a later level has you clambering through mere husks of the once proud buildings, reduced to little more than hardcore. 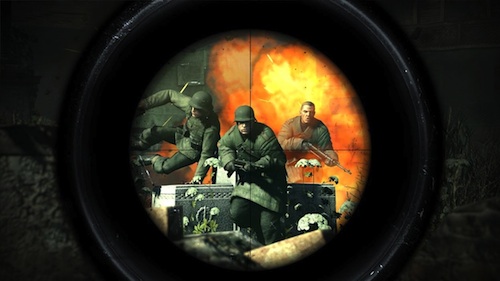 To help you on your way, you’re equipped with a pistol with all the stopping power of a fly hitting a windscreen, to silently dispatch any nearby enemies. Somewhat less subtle is the platter of war-time gadgetry at your disposal, ranging from binoculars and trip wires, to the humble rock. The rock, of which you carry an inexplicably infinite amount, is exclusively used for luring adversaries to untimely ends, an incredibly useful tool of the sniper. Key to your survival and success are the binoculars, with the ability to ‘tag’ any number of enemies, thus providing a constant reminder as to exactly where they are. A neat little feature is that upon hovering over an enemy for a second, you’re provided with a wealth of additional information about the poor sod about to have his face rearranged through bulletoplasty.

For a game which professes to be so laden with stealth, Rebellion don’t half make the going tough. One of the opening missions involves entering a military base, once I’d stealthily dispatched of all guards, I suddenly passed through an invisible wall, only for the full force of the Third Reich to come whizzing past my face, immediately turning me from super sniper to human sieve. The cover system too, whilst functional, can occasionally prove to be quite finicky,  lacking the finesse one comes to expect from modern games. The ability to swap from cover to cover would’ve done the game a world of good, as well as lending weight to the notion of stealth. 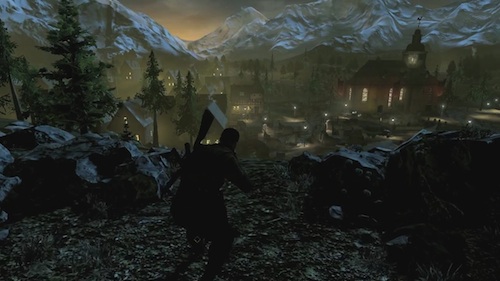 Thus far, you wouldn’t be mistaken for thinking Sniper Elite V2 was little more than your standard sniping fayre, but you couldn’t be more wrong. If there’s one thing more satisfying than accurately judging the bullet drop over 200 metres, to then hear the faint ding of success on your target’s helmet, it’s when all the gory detail is conveyed for you in simply glorious slow motion. It’s not entirely dissimilar to VATS from the Fallout universe, but far less reliant on Algebron, the God of Maths. Instead, your shooting is largely determined by your hear-trate which in turn affects your breathing, when below a certain point, a bullet-time variant is triggered, providing a handy red square of precisely where to end your foe’s life.

Words simply cannot describe how satisfying some kills are in this game, occasionally an X-ray cross section of the offended area will pop up, gratuitously breaking bones, muscles and vital organs in the process. Hearts can be broken, eyes can be popped -indeed, there’s an achievement for it-  but most disturbingly of all, so can testicles. Whilst such a degree of gore is both hugely gruesome and utterly extraneous, it satiates bloodlust like nothing else. 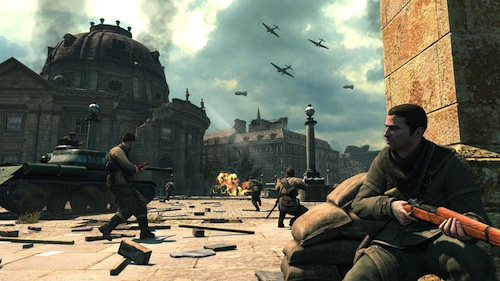 Whilst kills can be downright beautiful, in the same way there’s a certain majesty to watching a car plough through Nick Clegg’s front room, what really makes them sing is the game’s use of sound. Much care and great attention has been taken not only to the sounds of a bullet travelling at ungodly speeds, but each perfectly orchestrated sound of piercing helmets, flesh and bone is simply a crescendo of satisfaction.

Sniper Elite V2 is a welcome addition to the genre, providing some marvellously gratifying gameplay but indeed some levels seem a little limited in scope, as well as occasionally letting itself down on the stealth front. Whilst not a title I’ll be playing from now until the end of the world, I can easily see myself returning for some more ball-bustin’ action in 6 months time.

Final Verdict:
GOOD
Had the game been released a couple of years ago, in identical form, it would've been flippantly dismissed as 'just another WWII game', but in the current climate Sniper Elite V2 seems like a breath of fresh air.
A copy of this game was provided by Developer/Publisher/Distributor/PR Agency for review purposes. Click here to know more about our Reviews Policy.