It was only a few weeks ago I was sat in this very same chair with my head in my hands lamenting the missed opportunity that was Sonic the Hedgehog 4. My head has once again been lifted as I have had the pleasure of playing Sonic Colours, the game that Sonic 4 should have been all along. It takes the fundamental gameplay of the franchise whilst, adding to and, updating it into a modern context.

The gameplay features the same simplicity and sense of speed we came to enjoy in the older Sonic games but shifts often between a 3D and 2D perspective. Think the good bits of 2008’s Sonic Unleashed with a little bit of Mario Galaxy for good measure (and no bloody werehog sections or other characters to ruin it.) The story follows Sonic as he investigates a theme park that Dr. Eggman has built for fear that the evil genius is hatching yet another plan for world domination. The levels take place on the planets that surround the theme park, again showing the Mario Galaxy influence outright. The plot escalates when you discover that Eggman is attempting to capture the alien-like wisp creatures, who plead Sonic to rescue them from Eggman’s clutches. In return these little critters grant Sonic new colour abilities ranging from the ability to fly for a temporary time, to the power to drill through the ground. The abilities help keep the gameplay from getting stale and add a decent puzzle element later on as you need to mix and match your abilities to reach the goal. 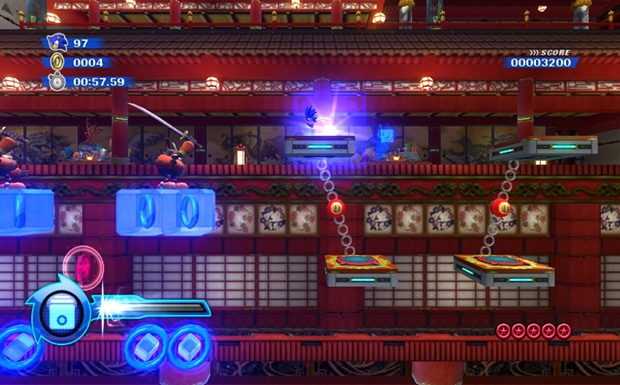 The gameplay is generally solid throughout and retains the swift and speedy gameplay that the series is renowned for. This is the next gen Sonic game we have needed all along. The path isn’t entirely rose-tinted however, as an occasionally confusing level design can lead to one too many of those “where do I go next” type of moments. This is also usually the point in my reviews for these types of games where I criticise them for ripping off other titles, but in the case of Sonic Colours I actually found its blatant assimilation of gameplay and presentation components from Mario Galaxy 2 improved the experience to no end. Everything from the colour powers, to the constant perspective shifts is very clearly sourced from the recent instalments in the Mario franchise, but if you’re going to steal you may as well steal from the best.

While we’re on the topic of theft from the Mario series, it is clear to note this in the game’s soundtrack. Once more however, this is a case of it greatly improving the game and giving it a defining characteristic that further brings the franchise out of the 8 bit generation. Gone are the chirpy midi tracks as they are seamlessly replaced by rich orchestral textures that give Colours a whole new feel and tone within the Sonic series. Sadly, the same can not be said of the voice acting. It is still in that awful way of trying to give Sonic and pals more “attitude” and it’s just very… well, lame. There is no other word to describe it. If only they replaced it with cute animal noises and gave us subtitles. If only the mute button was easier to find on my TV remote. Anything to prevent myself from having to here more of this embarrassing excuse for voice acting. 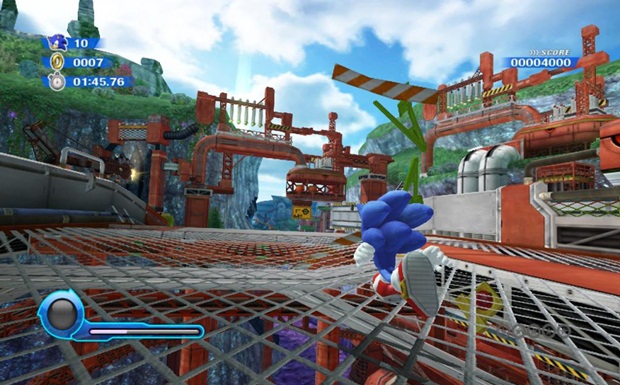 Colours sports some rather tasty visuals for a Wii title

The Graphical side of the presentation is thankfully more unanimously enjoyable. The game looks smooth and crisp and, even during the high speed sections, Sonic Colours runs at a smooth frame rate. My only gripe was the jagged edges that occur on account of the Wii’s ridiculous inability to output in HD, but this is a criticism of the hardware and not the game. As far as Wii games go, Sonic Colours is one of the better looking ones out there.

As far as lifespan is concerned Sonic Colours manages to deliver yet again. The main story mode itself clocks in at roughly six hours if you blitz it, but going for all the secret red rings and the elusive S rankings for each level will increase your game time considerably. When you’re done with that there is also the sonic simulator mode, that features a bunch of new retro themed levels. Admittedly these levels didn’t feel quite as well designed as the main story levels, but the ability to play through them co-op with a friend is certainly a nice touch. 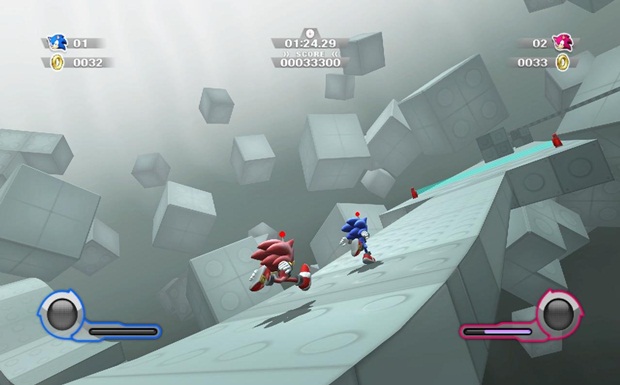 The inclusion of a two player mode is a nice touch, and a pleasant reminder of the days of Sonic 2 and 3

The Sonic series has been setting itself ablaze for the past decade or so, but Colours rises like a phoenix from these ashes. Sonic is now officially fun again. Spread the word people! Sonic Colours is a game worthy of your attention and I sincerely hope that in this busy Holiday season it gets the sales that it deserves.

Final Verdict:
SUPERB
Though clearly designed with kids in mind, Sonic Colours offers the most enjoyable “modern” Sonic experience to date and is easily the best Sonic game to come out in years
A copy of this game was provided by Developer/Publisher/Distributor/PR Agency for review purposes. Click here to know more about our Reviews Policy.