The biggest problem with SoulCalibur V is that it does the exact opposite of what many other cash cow franchises are doing these days- it takes the core mechanics of the formula, and it doesn’t dumb them down. It builds on them. And while this gives way to a more hardcore and enjoyable experience for people who’ve played fighters or SC games before, it risks the danger of inaccessibility. And that can be a huge bane for a game. SoulCalibur V is a bit too hardcore- but that’s not necessarily a bad thing. Other “hardcore” hardcore games are enjoyed by the not-so-hardcore too. Like Zelda, Halo and others. 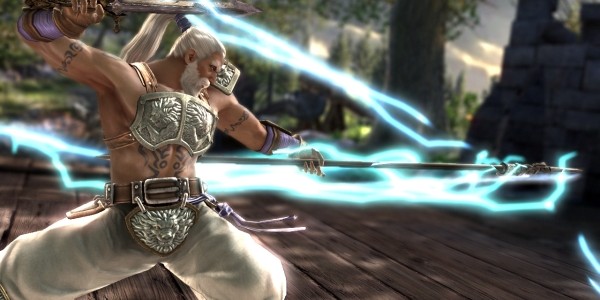 But they have good tutorials, and once they do teach you stuff, they slowly ease you into the games mechanics. SoulCalibur V grabs your head from the back and pushes it into a barrel of water and the bubbles stop coming up. It teaches you a bit too much at the same time, and none too properly, and then it thrusts you right into the heat of the action, making it hell for you to have to fight through the fights. Seeing as this game is a fighting game, that poses a bit of a problem. This not only scares away people who may not have played fighters in a long time, but also newcomers. And there’ll be lots of newcomers.

The single player itself isn’t very impressive. There’s a very small number of modes to play through, and the most basic one- the story mode- is best left forgotten. While the character cast is comprehensive and impressive, the story mode has ridiculous and bland scenarios and the writing is just plain bad. When you compare that to the excellent SoulCaliur II, it breaks your heart. Overall, the single player lacks any kind of variety. The AI is repetitive and predictable after a point, so it makes fights more choreographed than they need to be later on.

The core fighting gameplay, however, is excellent. It’s fun and addictive, and once you get the hang of it, you realize the beauty of it. This weapons based and combos focussed fighter’s gameplay is very different from other contemporary brawlers, like Street Fighter or Tekken, and in some ways, it’s even better and  more enjoyable. It’s nothing fancy and nothing SC fans haven’t seen before- but why fix it if it ain’t broke? 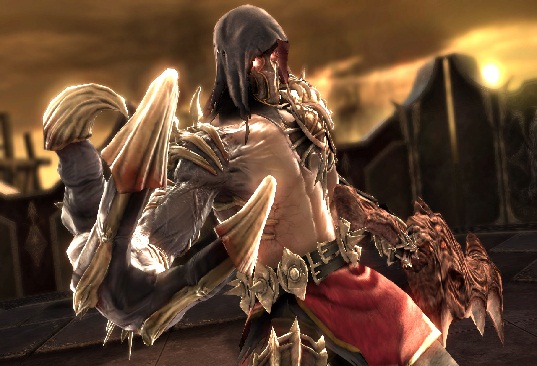 However, that’s not to say that it’s exactly the same as before. A major new feature- Critical meters- adds a lot of depth and a huge element of strategy to the fights. Now even things like parrying and combos are dependant on this new feature and it makes things a lot more spontaneous and tactical than before. It opens up the doorway to several new combat moves and several new combos that will blow you away.

But like so many other games this generation, the true fun of SoulCalibur V is in online play, not off. As I mentioned above, single player lacks any kind of variety and gets boring, repetitive and predictable soon, despite the many new changes to the fighting system. However, when you’re battling it out, one-on-one with an opponent controlled by a real person, things get tense real fast. Fights are a lot more hot and a lot less static online and the element of strategy is greater than ever before.

It has some pretty great community features and seamless online integration makes the experience that much more addictive and fun.

I also have to take a moment to mention the excellent graphics of the game. They present some great details and a wonderful art style, one that is hardly replicated in games these days. It may not be the most outstanding visual work I’ve ever seen, but it’s definitely memorable. The fighting arenas are also very well built and will keep you on your toes during the fights. 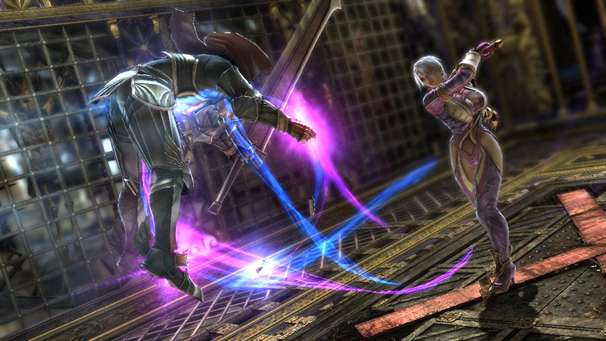 Ultimately, SoulCalibur V isn’t the best game in the series. It has its faults- a lot of them- and it takes a lot of steps in the wrong direction. But it also takes a lot of them in the right one. SC5 is an enjoyable, addictive game that has it’s fair share of faults, but is well worth your time if you’re a fan of the series or the genre.

This game was reviewed on the PS3

Final Verdict:
GOOD
SoulCalibur V may not be the best entry in the series, and it does take a lot of missteps, but in the end, it manages to be a highly entertaining game.
A copy of this game was provided by Developer/Publisher/Distributor/PR Agency for review purposes. Click here to know more about our Reviews Policy.