Spellforce 3 Review – The Magic Of Mixture

Better than the sum of its parts, Spellforce 3 is a captivating mix.

The glorious “PC Master Race” enjoys some pretty layered games on the regular, with experiences like Starcraft, Elite Dangerous and Diablo that ask far more of the player and their input device than most consoles will dare. We don’t see many Diablo-like dungeon crawler RPGs or RTS games on console because of how complex either genre can be on its own. Spellforce 3 then, is a curious experiment. Taking the mechanics of both a hero driven RPG in the vein of a Diablo and layering in a Real Time Strategy system to create something that when separated out aren’t anything too special, but somewhat click when together.

The medieval setting of Spellforce 3 isn’t particularly unique unfortunately, and many comparisons could easily be made to other games (such as The Witcher 3). The war-torn land of Eo, recovering from a brutal Mage War is now beset by mysterious plagues. Though the setting is pretty old hat, it does the job well enough with giving context to the actions and the story. 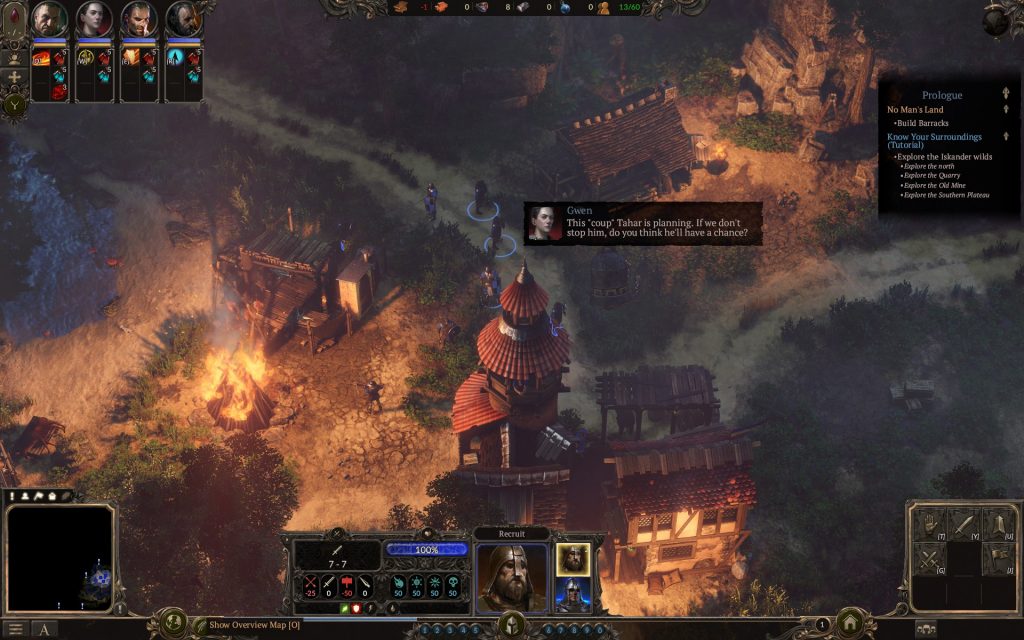 "I would have preferred a little more bravery in the story for a game so bravely playing with mixing genres, but it at least got out of the way when it counted."

You control a central protagonist named Tahar, a player customized avatar who’s the offspring of the mad villain who kicked off the Mage Wars. Through the course of the game you’ll grow in strength, recruiting and raising armies, forging alliances across the world to achieve your goals of stopping a looming threat. There’s that tired discrimination plot line around persecuting Magic users, which falls apart under any real scrutiny as always, but in the moment it pushes things along. I would have preferred a little more bravery in the story for a game so bravely playing with mixing genres, but it at least got out of the way when it counted.

Though firmly rooted in some western RPG tropes with the story, the strength of the title is how well it blends together the RPG game mechanics with larger RTS elements. If you’ve ever send out a patrol of archers to locate an enemy empire, you’re going to slip into the gameplay of Spellforce 3 with relatively little problem, and even if you haven’t then fairly competent tutorials and map systems help keep you on track.

Where as some games would change completely between their two parts, you’re always going to be controlling the game from the same overhead, isometric perspective whether you have 4 heroes in a dungeon or 40 units storming a battlefield, fingers dancing all over the keyboard to fire off hero skills or use hotkeys in base management. Quests can seamlessly transition from your small party of heroes doing dungeons and slaying dragons and naturally progress into a situation where you’ll have to build a base, defend it and raise an army to take on a larger task. 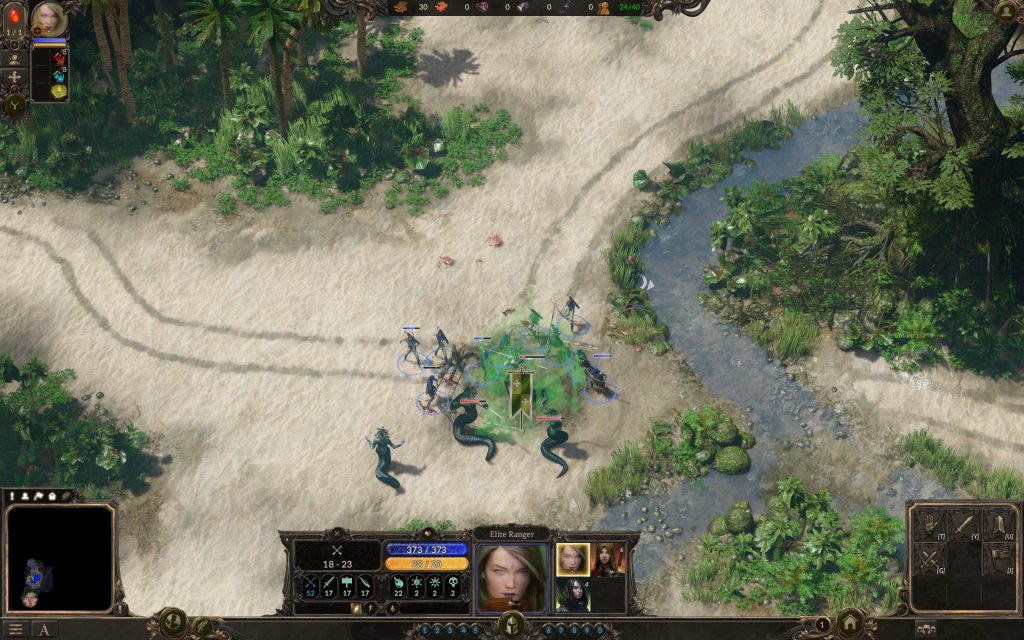 "The RPG and RTS elements blend together almost seamlessly, bringing together those quieter moments of a tight group of heroes in a dungeon and those sprawling battlefield clashes cohesively. "

You maintain control through the entire process, commanding where your heroes go and which tasks to accomplish in whichever order. You can send out a detachment while your heroes guard the home base or you can split your main adventuring party into a number of smaller units and have those heroes back up your forces, flitting between them with hotkeys as you would in an intense StarCraft match even as they focus on different objectives across the map from each other. The RPG and RTS elements blend together almost seamlessly, bringing together those quieter moments of a tight group of heroes in a dungeon and those sprawling battlefield clashes cohesively.

It’s not all flawless, the camera controls are awkwardly mapped to Page Up and Page Down by default, though you can try to set them to something more convenient it’s not as simple as it could be had they taken a system from a similar game like Total War. The grand vistas the game has you explore are engrossing but can sometimes get in the way of the gameplay, forcing you to work with the fiddly camera systems or hiding small alcoves of loot because you looked at it from the wrong angle. Luckily the strength of the PC platform is allowing players to re-key a lot of this to their liking but the camera systems will, regardless of how they’re keyed, feel a bit clunky thanks to the level design. The sense of scale and use of colour in Spellforce 3 is amazing, with the environments you visit feeling grand and massive on a level we haven’t seen in a long time, making full use of how far back the camera is pulled to bring the history the story is trying to show off to the forefront, and helping give you that connection that tired tropes don’t. 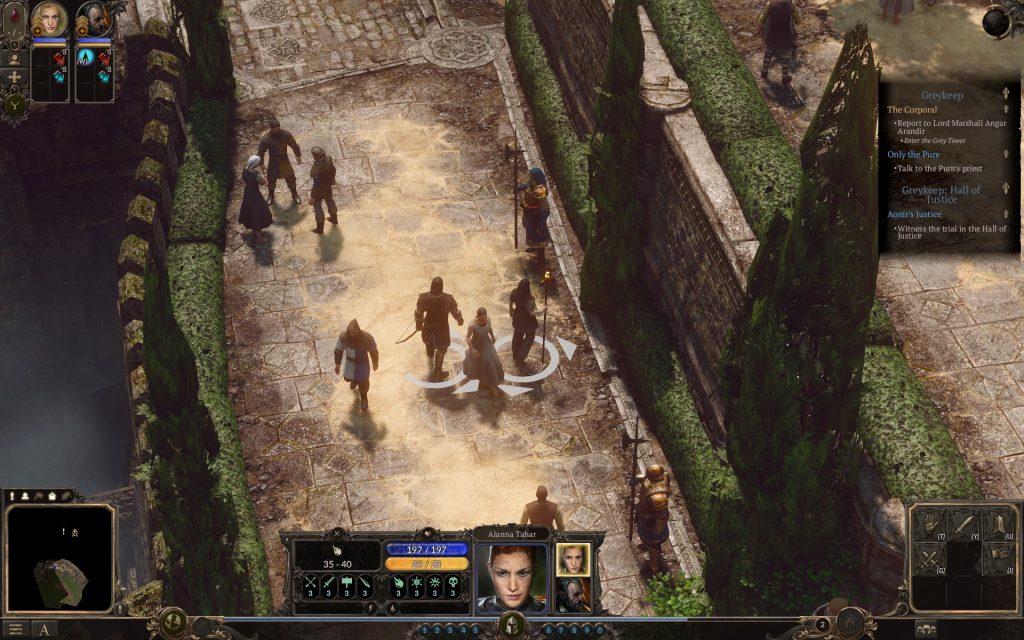 "Between the push to build and the many quest objectives, you’re never short for something to do in Spellforce 3 and it’s all reasonably easy to take in after an hour or so."

The armies are comprised of very basic, one attack units like Archers, Arsonists, Scouts, Infantry, etc, and are mostly single use instead of the flexible units usually seen in the RTS genre, but the dichotomy is there to put a spotlight on the main heroes. Your party is generally far more durable, and can support with magic, combat skills and healing depending on how you’ve chosen to grow their skill tree after levelling them up. You can use your hero characters to inject a slightly deeper layer of tactics through a simple hold of the Alt key as you click, popping up a radial menu where you can choose to fire off abilities from your full party simultaneously, using the effects they provide to turn the battle in your favour as well.

During larger engagements, while the game does have deployment options that are highly reminiscent of Total War, where you can command your infantry to form a line while archers remain behind, the game fails to really use this mechanic on most difficulties. Resource gathering is key to building your forces wisely, and you’ll need to make use of that army to capture and control different territories to raise your maximum unit cap and have the resources nearby to sustain them. Between the push to build and the many quest objectives, you’re never short for something to do in Spellforce 3 and it’s all reasonably easy to take in after an hour or so.

It’s a trope of wrap everything up as Spellforce 3 “is greater than the sum of its parts” but then again, Spellforce 3 itself is at its weakest when it leans on the tropes of the western fantasy setting and some mainstays of the genres it’s mashing up. But the game is also at its best when it is seamlessly moving between the best of both genres and giving the player the agency to tackle its quests in some unique ways and on some grand maps. Get over the small learning curve and Spellforce 3 has many interesting ideas to show.

Great quest design, RTS and RPG gameplay fit great together, the gameplay can flit between personal RPG battles to massive RTS skirmishes with relative ease, and the world you do it in has a massive sense of scale and great colours.

Some clunky control systems such as camera, setting isn't nearly as fresh as the system's level mechanics to the point of some minor distraction.

Final Verdict:
GOOD
Two great game genres that play great together, Spellforce 3 isn't anything special in any one area but the combination of the elements adds enough that it should keep players coming back for a long time.
A copy of this game was provided by Developer/Publisher/Distributor/PR Agency for review purposes. Click here to know more about our Reviews Policy.