I have been seeing not so great reviews for Splatterhouse, but I have do disagree with all of them.  First of all the game is not some new groundbreaking kind thing where your going to be blown away from the likes of what they did in Uncharted 2 and Call of Duty: Black Ops.  This is a re-make of the old classic arcade games brought to life in a next gen world and that was done quite well in my opinion.  There is Splatterhouse 1, 2 and 3 old style platform arcade games starting with their first release in 1988.  This game is simply entitled Splatterhouse following the trend of ‘we don’t need anything but the original game title’.  The game is a hack and slack title that has its classic platforming elements that pop up every now and then, keeping true to it’s original arcade games from back in the day of pumping quarters in machines. 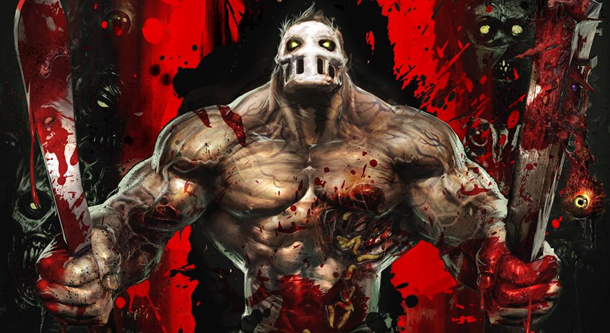 The story begins with you, Rick Taylor clinging on to his last thread of life when what else could you ask for at that point?  A talking Terror mask that promises help by wearing it.  Rick is then transformed from a skinny, lifeless dude hanging onto to his guts to a muscle bound, ab toned monstrosity of a human like person dawning the talking Terror Mask.  Now unlike other hack and slashers this one has a fairly descent story to follow.  The game takes place in Dr. West’s mansion and he has taken your girlfriend Jenny hostage as you trail after him through each level to save her.  It may not be to the most complex of stories or the most intriguing of ones but enough to keep you interested in the game as well as some twists in it make it better than most hack and slash stories I have come across.

Story still not doing it for you?  How about the collectibles in each level being a piece of a picture of Jenny that when completely put together may reveal your naked girlfriend posing in a particular place you and her spent time in.  Cut scenes with glimpses of memories with Jenny randomly appear only making you want to save her more rewarding… yes I have a heart… screw you.  But let’s get down to the real essence, the meat and potatoas of Splatterhouse… which is blood.  Yes for those of you have not played the old arcade games, it’s blood, guts, gore and some more gore on the side.  This is the goriest game I have ever played… ever.  I don’t want to say gruesome because there are very gruesome games out there but as far as blood/gore, Splatterhouse takes the cake.  So far we have blood, gore and naked pictures of your girlfriend.. intrigued yet? 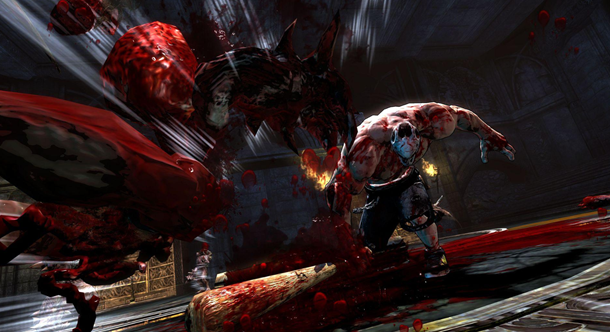 Splatterhouse has the most horrific gory moves I have every seen.  You can rip enemies limbs off of them and then kill enemies with that limb (netting you and Achievement/Trophy)  You can impale, sodomize rip enemies hearts out (Mortal Kombat style) and when an enemy is glowing (usually red), you can grab that enemy to enter a quick-time event requiring the right button to push(very, very simple) to pull off almost a ‘Fatality’ type of kill in the style of Mortal Kombat, one for example, crushing an enemies skull inward with both hands for a relieving splat!  You will gain the ability to purchase more skills as you progress through the game which mostly consist of more brutal and efficient ways of killing enemies that can be bought using, you guessed it.. blood.  Yes you collect blood as you kill enemies walk over maggots defeat mini bosses, all stored in your little jar of blood (blood=money/spending point).

The game can get a bit repetitive at times but the boss battles are fun, just not over the top like it seems they were aiming for.  It’s like they tried to take the classic movie horror genre and bring it into the game which was semi successful but not in anyway breathtaking or jaw dropping which is as I mentioned what I think they were aiming for, especially with the boss battles.  The level design is not top notch and besides from some twists in the story the game is great if you are A) a fan of the old arcade games B) If you love blood, guts, gore and boobs but otherwise this game is not for the squimish and not for people that are really looking for a very in depth game.  I think other reviews circulating the internet have given the game bad rep because it can be  compared to some of those underground, never heard of it, single player, basic mechanic games but that is not Splatterhouse.  Splatterhouse is way above those type of game especially with its previous arcade releases.  While on that subject the game includes all three original Splatterhouse game that you have to unlock which is awesome and I think more games should include this feature. 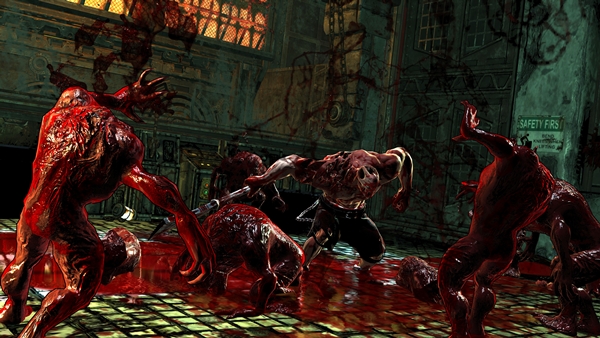 On top of the inclusion of Splatterhouse 1, 2 and 3 in the game you can view your statistics in depth, which is cool to see how many heads you have ripped off to kill an enemy with.  The game mechanics are fairly basic and do kind of have that almost Ninja Gaiden feel, when it’s like don’t get hit at all or your’e fucked.  I can annihilate a room of the generic bony looking enemies that are mostly all you’ll see through the game aside from bosses, but as soon as I get hit, it’s a very quick path to death even with full health.  That is not always the case but, it is the gist of it, while there are combos and progressing through the game unlocks new combos to purchase as well as new skills that are very helpful as well as brutally gory.  At times the controls do seem like they are a bit laggy and a little too basic for a next gen game, especially while going through the 2D platforming sections.  This does not hurt the gameplay in my opinion, I just expected more.

You have the Terror Mask voice by Jim Cummings who has done voices in many games including Mass Effect 2, Lara Croft and the Guardian of Light, Spiderman: Shattered dimensions, Alpha Protocol and best yet the voice of Winnie the Pooh Bear.  The Terror Mask speaks to rick taunting him and spewing out some semi humorous lines.  The game really only fails in its mediocre graphics (which while ripping someones face in two doesn’t matter all that much) and it’s gameplay mechanics that have not really evolved from the original 80’s arcade games.  Like jump during platforming sections might actually be  worse than the originals.  But with everything done and said I could not really ask for much more when it comes to a remake of the original games besides the aforementioned flaws.  If Splatterhouse was let’s say an XBLA/PSN Game, it would be the best of the best, but it’s not so if blood, gore and boobs does it for you check it out, if you are looking for anything else try going a different direction.

Games includes original Splatterhouse games 1, 2 and 3. Intense blood and gore with animations never seen in a game before.

Long load times every time you die. Game controls have not evolved to where they should be.

Final Verdict:
FAIR
Splatterhouse is a complete re-make of the 80's arcade games brought to the next generation consoles.. extra blood included. This is the goriest game ever made with blood and boobs being its main highlight.
A copy of this game was provided by Developer/Publisher/Distributor/PR Agency for review purposes. Click here to know more about our Reviews Policy.