SSX Tricky was one of the biggest and brightest titles of the sixth console generation and whilst not the latest title in the series, it’s certainly the most memorable and even a whole 10 years on, is still widely regarded as the best snowboarding game to date. SSX has a tough act to follow and as the fifth game in the series, carries the enormous weight of legacy on its snowy shoulders, even if it no longer carries the EA Sports BIG brand name. 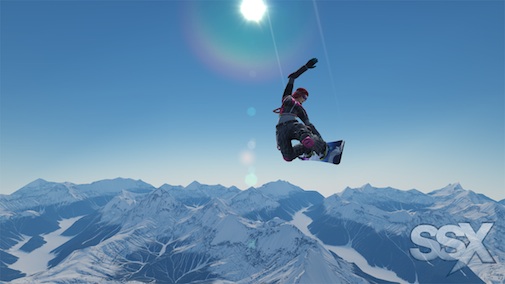 World Tour is essentially where the story mode of SSX lies, although to call it that isn’t truly representative of what it really is. In a nutshell, and that’s all there really is, Team SSX have to ‘defeat’ former child protégé-gone-rogue, in order to prove some sort of hitherto-unknown point to their legions of fictional fans by conquering the World’s 9 Deadly Descents. The ‘plot’ of the game is almost a hideous marriage of Take That, – before Robbie Williams decided that he probably couldn’t live off of the proceeds from Millenium, forever- and Scott Pilgrim. There really is no discernible reason for there any SSX game to have such a charmless plot, other than due to a nagging sense of obligation. 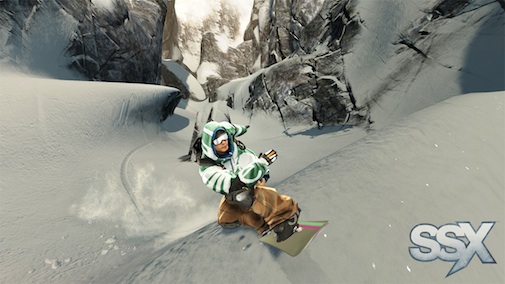 For series newcomers, the game boots off with a rather useful skydiving tutorial, which will make a lot more sense when you experience it for yourself, serving as a means to familiarise yourself with the game’s trick mechanics without having to worry about your old friend gravity. The controls feel as tight and fluid as ever and once one accustoms themselves, allows for some rather stylish combos and Once ‘Tricky’, you enter a state of snowboarding zen where very little isn’t possible and can prove to be exceedingly rewarding. This harks back to what made SSX Tricky such a marvellous game, a ridiculous degree of madness, it’s a shame SSX doesn’t quite reach the same pinnacle of ludicrous in all areas. 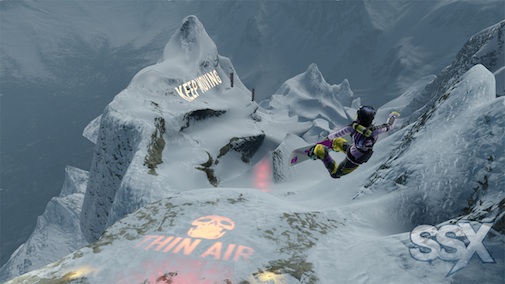 All of the once characters seem to have been left in the wash, with much of their colour sapped out, replaced with a dull degree of realism that doesn’t suit the franchise at all, the single biggest distinction being that one of the characters is wearing a tie-dye hoodie. It doesn’t stop there either, for all the added expanse of many of the maps, they’ve all been aggregated into suprisingly dull, lifeless environments, only broken by welcome, if arbitrary, red poles. 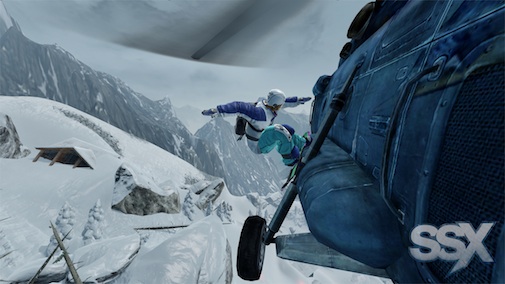 The major drawback of SSX is the utterly inane decision to exclude split-screen local multiplayer, a core component of previous games. I was eagerly anticipating the thought of being able to take on my girlfriend -a huge fan of the franchise- in head-to-head snow-battles of skill and endurance, instead we’re reduced to lowest common denominator, the time trial.

Another, more minor complaint is the introduction of the ‘rewind’ system found primarily to inhabit the motor racing genre, the transition to SSX almost feels like an excuse for occasionally poor level design, a feeling exacerbated by the introduction of veritable abysses, punished with death. Whilst this may be due to my lack of obvious finesse, in the second Deadly Descent I found myself using it about 10 times. In a game a fast-paced and as frantic as this it seems a bizarre design decision to make it possible to fall off of the map as it utterly destroys any notion of flow. 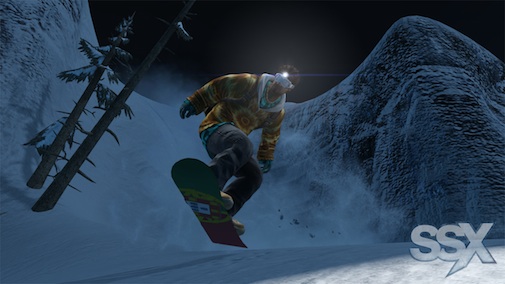 The element of SSX I was most looking forward to was the introduction of particle-physics, rather than the pre-scripted fanfare of yesteryear, it makes for some rather mixed feelings. The avalanche segments are presented in a reverse view version of SSX which, whilst handling identically to the core gameplay, still feel like a mini-game. That said, it’s certainly a mini-game with its perks, occasionally throwing out some thoroughly intense powder rides which have drawn me back time and again. 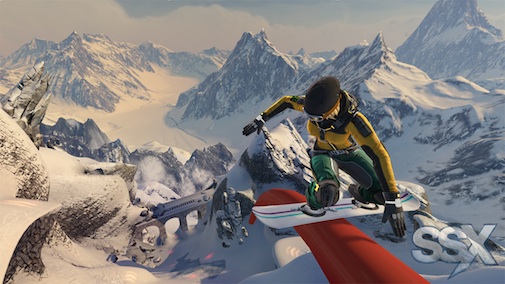 Strangely enough, SSX seems considerably less substantial than its predecessors and one can’t help but wonder if a few tricks have been missed in terms of the multiplayer and a more cynical man than myself might attribute this to a more industry-wide issue attitude. SSX certainly feels like a current generation reboot of Tricky but not necessarily for the right reasons and for every new innovation -graphics, avalanche physics and more ‘open’ maps’, it still feels somewhat constrained with much of the charm and outlandishness no longer present, instead replaced with the steely cyan stamp of today. Even with that caveat, the game still proves to be one of the most fun outings of the year thus far, it’s just a shame that it hasn’t entirely achieved its potential.

Final Verdict:
GOOD
SSX certainly feels like a current generation reboot of Tricky but not necessarily for the right reasons. Even with that caveat, the game still proves to be one of the most fun outings of the year thus far.
A copy of this game was provided by Developer/Publisher/Distributor/PR Agency for review purposes. Click here to know more about our Reviews Policy.